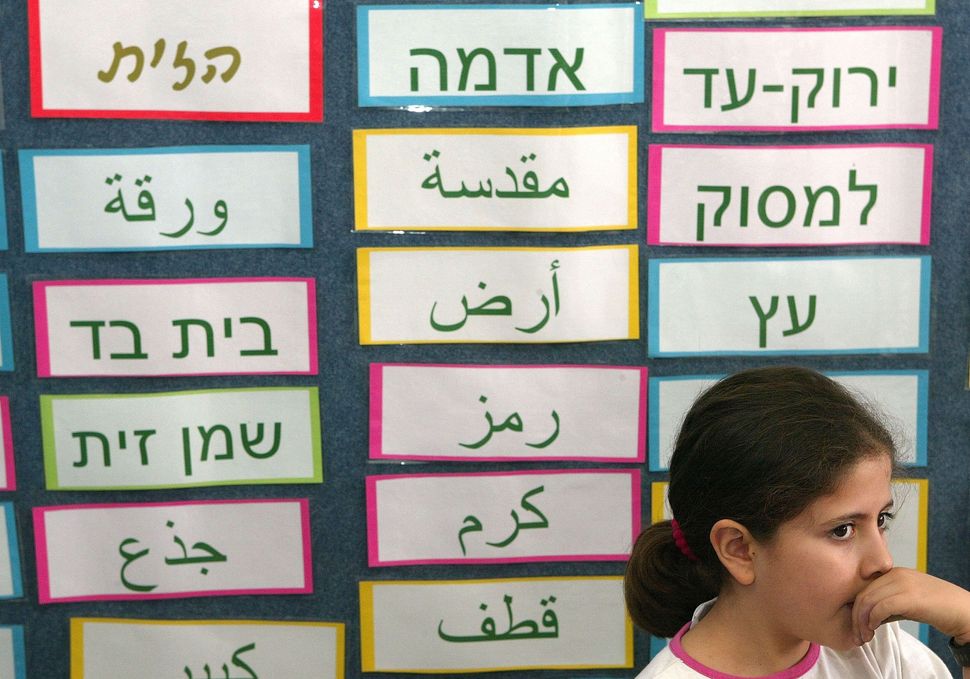 Edited by Naomi B. Sokoloff and Nancy E. Berg

The maximalist approach means that the essays here include contributions by the novelist Dara Horn, who writes in English; the American poet Robert Whitehall-Bashan, who writes in Hebrew; scholars like Sarah Bunin Benor and Adam Rovner, and the scholar-writer-translator Ilan Stavans. The maximalism can also be seen in the list of those thanked in the acknowledgments, ranging from Yehuda Amichai to Robert Alter to Gershon Shaked to Ruth Wisse; in other words, a who’s who of Jewish literature and thought. The contributors have largely spent significant time in Israel with Jewish texts, but they have chosen to make their home in America. One contributor, the scholar and translator Adriana X. Jacobs, now teaches at Oxford.

This highly readable collection — edited by Naomi B. Sokoloff, professor of Hebrew and comparative literature at the University of Washington, and Nancy E. Berg, professor of Hebrew and comparative literature at Washington University — is an example of what is often called a crossover title because of its hoped-for appeal to both academic and general audiences. Each essay is substantive and annotated. I found that I got more out of these essays on second read, after I had absorbed all the details.

Highlights of this collection include an essay in which Horn describes the first story she was ever jealous of — Agnon’s “Agadat Hasofer,” usually translated as “Tale of the Scribe” or “Legend of the Scribe.” But the title can also mean “Tale of the Writer” because the word sofer in Hebrew means both Torah scribe, meaning someone who copies the Torah text onto the scroll, and writer or author. It’s a classic example of the compressed nature of Hebrew, which Horn meditates on as she wonders what the Hebrew language offers a writer. She concludes by describing the experience of reading one of her own novels in Hebrew translation:

“As I read through the Hebrew, I had the exhilarating feeling that I was reading a much less artificial book than the one I had written in English, one whose words and phrases and references and travels through time felt entirely ordinary, natural and authentic.”

“And then it occurred to me that the English version was the translation. In Hebrew, I was reading the original.”

Stavans contributes a beautiful, often mystical essay on his complex and changing feelings toward the Hebrew language. As a young man, he writes, he was fluent and read Agnon and Bialik in the original. (Agnon appears in a large number of these essays, which is interesting since he is out of reach for many Israelis.) Stavans spent years retracing the life of Eliezer Ben-Yehuda, who revived Hebrew. But in time, Stavans moved toward English and, more broadly, toward a polyglot approach. I was charmed by this passage:

“In East Los Angeles, I once came across an endearing bumper sticker. It read ‘Monolingualism is curable.’ Knowing only one language means living in a rather tight environment. By tight I mean asphyxiating.”

Stavans points out that “Jewish languages are used intraethnically among Jews to distinguish themselves from others. But Jews have always spoken other languages too, often a plethora of them, in order to communicate with the environment.” He continues by noting that American Jewry is the outlier — because it is “frighteningly monolingual.”

“Frightening” is a good word to think about, especially in connection with American Jewish monolingualism. I found myself reading “What We Talk About When We Talk About Hebrew” at the same time as I read Robert Alter’s monumental new translation of the entire Tanach, and I therefore thought about the generational element here. Alter is from around the same era as Alan Mintz, the late scholar (who was only about a decade younger than Alter); in this collection, Mintz describes himself as a “near native” speaker. But is there a new generation of American-born, non-Israeli “near native” speakers of Hebrew, like Alter and Mintz? And if not, why not?

Hannah Pressman edits the University of Washington’s Jewish studies blog, which attracted 160,000 hits last year. She points out in her essay here that Hebrew faces “many of the same challenges as other academic fields based in national literatures, such as decreased enrollment, the cancellation of language requirements, and increased pressure to demonstrate marketability and real-world applicability.”

And of course, getting anywhere in Hebrew takes an investment of time.

“For students to fully appreciate the rich offerings of contemporary Hebrew culture — film, television, music and literature currently being produced at a phenomenal rate — they must take at least two or three years’ worth of language courses, a hard sell for today’s results-oriented students,” Pressman writes.

She advocates for more public scholarship on the part of Hebrew scholars in her essay, to help make Hebrew’s case.

It’s worth noting that Hebrew — or at least biblical Hebrew — is actually doing better than other languages in this regard; the Modern Language Association found that a whopping 651 language programs closed in America between 2013 and 2016. The only languages seeing increases are biblical Hebrew, Korean and American Sign Language.

Of course, there have always been those rare Americans who master Hebrew, and here, the scholar and critic Michael Weingrad, who frequently writes for the Jewish Review of Books and for Mosaic, contributes an interesting essay on American poets who wrote in Hebrew. Note “wrote” not “write,” because most of this activity took place in the past; right now, there is really only one American-born poet living in America who actively publishes in Hebrew: Whitehill-Bashan. That doesn’t mean there aren’t writers writing in Hebrew in America, but what this usually means, in America and elsewhere — notably in Berlin — is that Israeli writers are leaving Israel and then writing in Hebrew from more affordable perches in the Diaspora.

This has caused controversy in Israel; Weingrad mentions Ruby Namdar, who won the prestigious Sapir Prize while living in New York. After that, the eligibility rules were changed.

Then there is the elephant in the room: Israel itself, and how it is viewed by younger Americans. For the most part, this is addressed elliptically as opposed to head-on, probably because the focus here is on language, not politics. Mintz notes that while he is a Zionist, he is “grateful that the revival of Hebrew and the establishment of Israel, though deeply linked, are not one and the same thing.”

The rewards of a multilingual life, and the unique riches available to Hebrew speakers, are especially important in a largely monolingual America. And perhaps, as many giants of Jewish literature and thought have long insisted, Hebrew is the link to eternity — and as Stavans might put it, one way to escape an asphyxiating narrowness of thought, which is the great danger of our time.

As for Carver, the final pages of this book reveal that he spent a few months in Tel Aviv in 1968 before he became famous. He drank heavily and learned some Hebrew phrases, but he was “too shy to utter more than a mumbled shalom shalom,” according to his biographer. Perhaps a book like this might have encouraged him to give Hebrew more of a chance.

Aviya Kushner is the Forward’s language columnist and the author of “The Grammar of God (Spiegel & Grau, 2015). Follow her on Twitter, @AviyaKushner