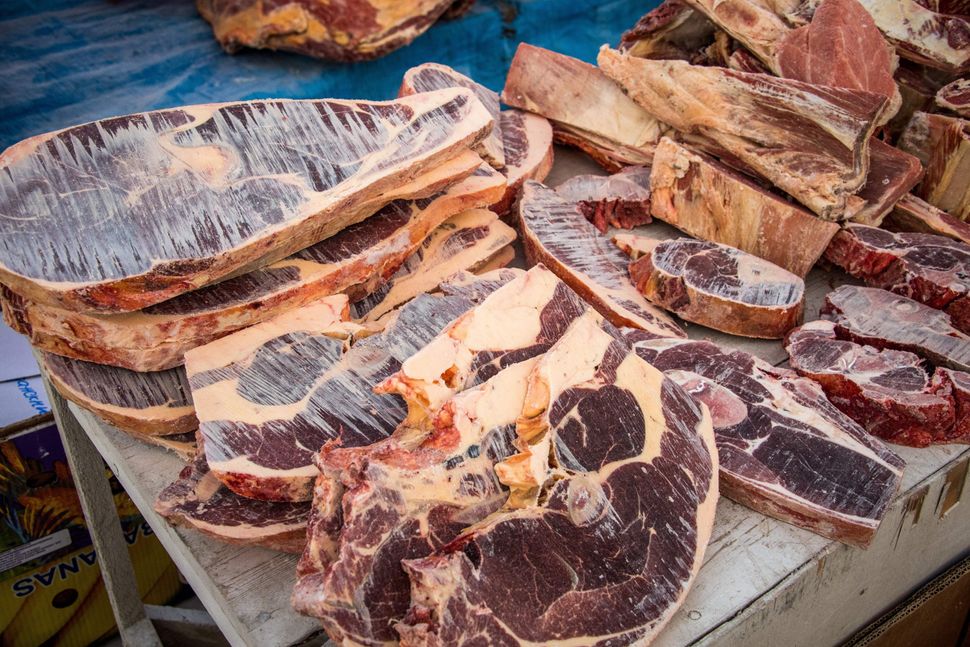 Raw meat for sale at a market in Russia. Image by MLADEN ANTONOV/Getty Images

A few years after I learned to read, I encountered a formative image in one of Sydney Taylor’s “All of a Kind Family” books. I remember it with absolute clarity: A daughter admires her mother’s figure, unique among the Eastern European Jewish women of the Lower East Side. They tend, she thinks, to look like mattresses with belts around them.

Mattresses with belts around them! I was not yet 10. I took my child’s body to the mirror to inspect it. And so I have inspected it year after year, watching for the inevitable change. My ancestors were hungry; their bodies adapted so they could survive. The tradeoff, I believed, was that I, too, must someday become a mattress. 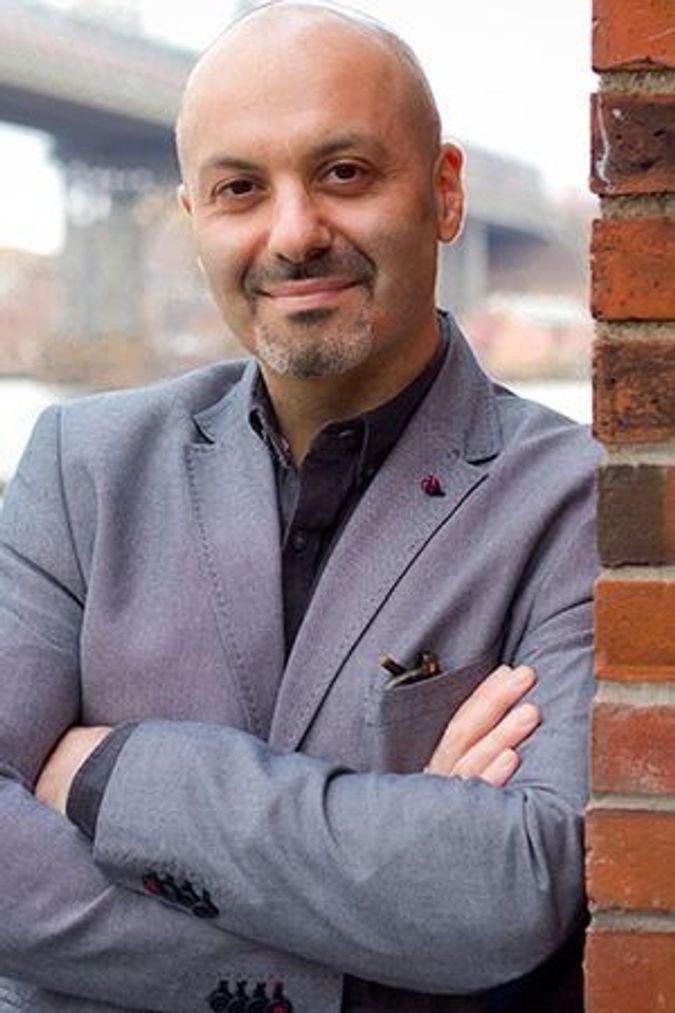 This is the Jewish way: We think of ourselves as a people of the mind, but live with the profoundly anxious understanding that our bodies take primacy. As a people we are hungry, and food, like so many things in the Jewish world, is both cure and curse. It is a source of tradition, a link to memories of the deep past. But it also fuels anti-Semitic stereotypes, particularly the blood libel, and has often been used as a test, or threat. During the Spanish inquisition, conversos suspected of maintaining Jewish faith were forced to eat pork or shellfish to prove that they had renounced their heritage. Centuries later, while I was in high school, acquaintances would sometimes pretend that they’d put ham in a shared dish, so they could watch me squeal and jump away.

Boris Fishman brings the fraught role of food in Jewish culture to evocative life in his new memoir, “Savage Feast: Three Generations, Two Continents, and a Dinner Table,” which chronicles his and his family’s immigration from Soviet-era Belarus to the United States, their complicated process of integration in their new country, and his own search for something like a homeland. Suspended between his Soviet childhood — Fishman was nine when his family left Minsk — and an American life from which he feels fundamentally distant, the home Fishman eventually finds is in food.

And oh, what food. Syrniki, little fried cakes of farmer cheese flavored with raisins and vanilla; ukha, “a Russian’s home soup,” fish-based and the sort of dish for which each cook has their own idiosyncratic recipe, the correctness of which they will insist on to the grave; cakes made with shortbread pastry and slender wafers and high-fat condensed milk; a savory pie in which crepes made with pulverized chicken livers sandwich a creamy, herb-flecked filling. Beware of reading, as I did, while at the gym. You will become so hungry that you will nearly faint.

I met Fishman in early 2016, when I interviewed him about his second novel, “Don’t Let My Baby Do Rodeo.” (We spoke at a Lower East Side bar on a slow night, and when the formal interview was done, talked for some time about a shared love of the mountainous west.) He’s a dexterous writer with a knack for character. In both his fiction and “Savage Feast,” he writes of people whose personas stray close to the line of cliché, yet are so unmistakably human that their portrayals rarely grate. Watching his elderly grandfather chat with his live-in home aid in Brooklyn, Fishman writes “He was flirting with her — not really, not in search of some kind of consummation, but as a man next to a woman.” A Russian-born coworker in the kitchen of a nouveau-Russian restaurant “installed a pull-up bar over a doorframe in the basement and heaved himself up and down until he heard the order machine croak to life, whereupon he told the machines to go fuck its mother and reluctantly relinquished the bar.” Fishman’s parents trek from New Jersey to Brooklyn to meet his non-Jewish girlfriend, “Jessica: a Viking, and given to the kind of close embrace, even with strangers, that makes a Russian person check his billfold.”

But even while “Savage Feast” is a memoir of family, stuck together with a love and need that practically demands rebellion, and a memoir of growth, with Fishman as its vocally frustrated protagonist, its real central character is hunger. And not just the ordinary human kind of hunger, but a specifically Jewish hunger: For food, yes, but also for independence, for belonging, for some vaporously defined emotional completeness, for not only security but also the sureness of self that such security should, theoretically, bring.

Tough luck on that last item. During a grueling Passover seder, once Fishman is an adult and belatedly furious with the inverted familial relationships imposed by immigration, he attempts to prove something by forcing his devoutly irreligious family to read the entire Haggadah. “If it was a Jewish holiday and I had to be there, my way would have to be taken into account,” he writes. But his way in this scenario is about rejecting the norm, not holding true to a freely-developed sense of self. He barely makes it two paragraphs into the Haggadah before his family demands they stop the religious nonsense and eat, and Fishman is left to grapple with the emptiness of his demand. “I didn’t care about Egypt any more than they did; I just wanted to hurt them,” he writes.

And so the hunger continues. Really, what it comes down to, is a hunger for something like truth. A true identity. A true relationship. A true understanding of his family’s history, and the ways it must and must not form his life. A truly great roast chicken. By the memoir’s end, Fishman has begun to find something like what he seeks, no longer mistaking the hunger for truth for truth itself. “My hunger has been good for my work, and a near calamity for everything else,” he writes. “At least I know not to rely on it.”