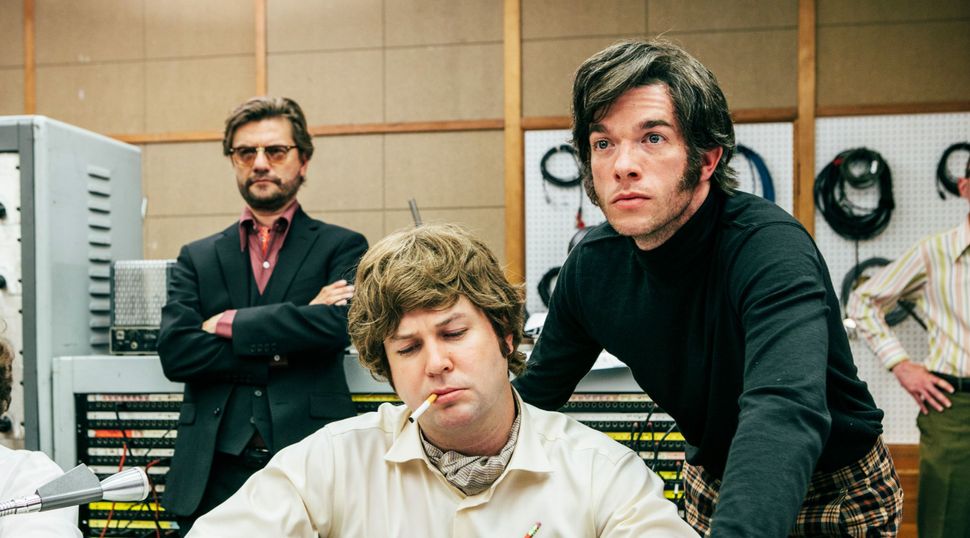 In the latest episode of IFC’s “Documentary Now!” the Irish Catholic-raised actor-comedian reinforces the Yiddishkeit promise of Broadway’s “Oh Hello!”, which he created with Nick Kroll, and the bawdy adolescent Jewishness of his role as Andrew Glouberman in another Kroll collaboration, “Big Mouth,” by donning sideburns to play a young Stephen Sondheim. Well, not the Stephen Sondheim, exactly, but a satirical version of the legendary composer and lyricist.

Each “Documentary Now!” episode is a painstaking parody recreation of a classic documentary film. In “Original Cast Album: Co-Op,” co-written by Mulaney and Seth Meyers, the film being sent up is D.A. Pennebaker’s 1970 documentary “Original Cast Album: Company,” which chronicled the recording of Sondheim’s landmark musical “Company.” The cult documentary, most of which can be found on YouTube and nowhere else, has everything musical buffs want: Elaine Stritch in a trademark tizzy, the creative team chain-smoking in ugly sweaters and even a Sondheim primer in Yiddish pronunciation.

In “Co-Op” Mulaney plays Simon Sawyer, an amplified version of Sondheim. To give you an idea of his demeanor, toward the end of the 24-hour recording session for “Co-Op: The Musical,” he attempts to boost morale by saying, in a perfect, pause-less deadpan, “when you lean into a rhyme you shatter the conversational tone of a lyric and it’s like nails on a blackboard to me and I love you all.”

When he corrects actress Dee Dee (“Hamilton” star Renée Elise Goldsberry) about the way she says the word “ruined,” he prefaces his instruction by saying “you’ve been doing something wrong for about three weeks and it’s annoying me.”

In the Pennebaker documentary Sondheim’s behavior is more genteel. He suggests, for example, that Stritch take a break when she appears tired during a long-haul recording of “The Ladies Who Lunch.” That’s not to say Mulaney isn’t riffing off a real exasperation Pennebaker captured in the composer. I refer you, specifically, to how Sondheim coaches an actress to say the word “bubbe.”

The plot of “Co-Op,” which appears to be a series of vignettes about the residents of and workers in a New York City apartment building, doesn’t much resemble “Company,” a show about Bobby, a 35-year-old single man and his married friends.

There is a character called “Robby,” though, played by an unnamed actor portrayed by the inimitable Richard Kind.

Robby is a doorman with a breathless solo “Christmas Tips,” in which he maligns a married couple for their holiday gift, a tree planted in Tel Aviv. The number pays tribute to Sondheim’s arch lyrics.“Tel Aviv” is rhymed with “for your marriage I do grieve” — Robby is threatening to reveal the husband’s infidelity while his wife had cancer — and then, more sensationally (and more imperfectly), Mulaney and Meyers rhyme “chemo,” “Filipino,” “bambino” and “Reno.”

The music, by composer Eli Bolen, resembles Sondheim in form if not subject. One number about doing cocaine at a Christmas party, performed by Alex Brightman and Goldsberry, essentially cribs the melody from “Not Getting Married Today” from “Company.”

It’s clear Mulaney knows his Sondheim, although he also admitted to The New York Times that he borrowed from Alan Menken’s “Little Shop of Horrors” for the opening number in “Co-Op”.

Playing Sondheim, Mulaney told The Times, “was the most physically comfortable acting I’ve ever done.”

“Because to make my face just kind of fall and look tired and not do anything and not smile, and then occasionally smoke a cigarette and shake my head ‘No,’ is so familiar to me,” he said.

The Times also spoke to Sondheim, who said that “the lyrics [of “Co-op”] are crowded,” but who issued praise for Mulaney’s portrayal.

“It’s fine. I don’t have any comments on it. Everything’s fine” Sondheim said of the performance, later adding that he thought Mulaney was “really funny.”