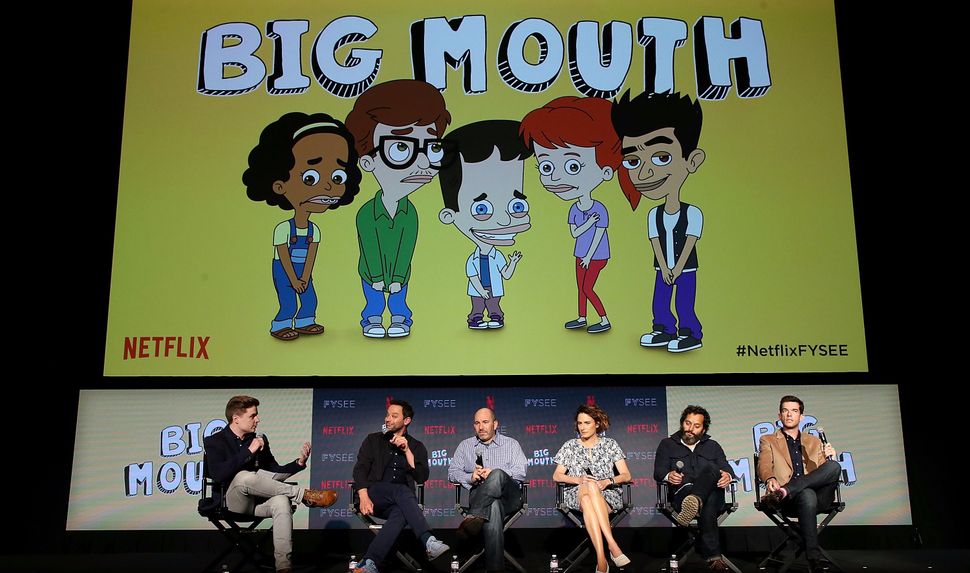 Ben Travers interviews the cast and creators of Big Mouth for a Netflix animation event. Image by Getty Images/Phillip Faraone/Stringer

Netflix’s “Big Mouth” is not for everyone. Though its charming animation and middle-school aged characters suggest something for the K-12 set, its excessively filthy humor makes it inappropriate for a large chunk of that demographic. By the same token, its extreme ribaldry, often paired with useful but sometimes didactic lessons about puberty, contraception and body image make it a weird fit for a post-pubescent adult. But maybe the strangest and potentially most alienating aspect of Nick Kroll, Andrew Goldberg, Mark Levin and Jennifer Flackett’s cartoon, now in its second season, is its self-conscious Judaism. It just might be for us.

While a lot of media, from “The Munsters” to “Bob’s Burgers,” is content to float by on Semitic suggestion, “Big Mouth” is hugely Jewish. Two of its main characters, Andrew Glouberman (John Mulaney) and Jessi Glaser (Jessi Klein) are Jewish. The third lead, Nick Birch (Nick Kroll), may not have a canonical Hebrew name, but I don’t know a whole lot of goyim with sisters named “Leah” and brothers named “Judd.” The biracial Missy Foreman-Greenwald (Jenny Slate), also seems coded as a chosen person, and that’s a lot to work with. Though the show’s conceit — middle school kids navigating puberty with the help of their Hormone Monster shoulder angels -– has universal appeal, it goes out of its way to establish a particular ethnic fingerprint beyond it. The first season comes to a head at a Bat Mitzvah (in a temple that seems to serve scallops, but still). A major plot point involves Jessi’s mother’s affair with a female cantor. Petty shulyard squabbles familiar to those in Jewish enclaves are mentioned offhandedly.

“Don’t ask your mother about shame. That’s why I pay synagogue dues,” Mr. Glouberman (Richard Kind) tells Andrew in an episode from the new season.

“You’re goddamn right and I’m not gonna pay a dime. Not until [Rabbi] Poblart gives up one of those three parking spots. We wandered the desert for 40 years so that this man could park on a diagonal? Feh!”

Later, we encounter both Rabbi Poblart (who holds down the bimah at Temple Beth Amphetamine) and his son, a middle-aged bachelor living in a condo for divorcees. Poblart fils is a disappointment, having tanked a business designed to sell sheitels to “religious dogs”—literal dogs.

These jokes, to say nothing of the show’s pervasive yiddishisms and regular exclamations of mazel tov, herald something big for mainstream animation: Inside baseball gags for Jews that put the Jackie Mason episode of “The Simpsons,” where he plays Krusty’s rabbi dad, to shame. Gone is a concern with Main Street, USA. Here is a tribute to the tri-state area and its Hebrew School milieu.

In “Big Mouth’s” willingness to leave gentiles out of the inside joke and offend Jews with the same, there’s something novel in the works. It’s the kind of insular work that seems to only have appeared before in, well, novels.

Philip Roth was infamous for exposing the hypocrisies of Jews using our own vernacular. Saul Bellow was never meek in calling out the moral frailties of his co-religionists. Many sat shiva for Norman Mailer whose anal sex scene in “An American Dream” makes Henry Miller (and Roth’s Portnoy) look tame, but the book and its murderous protagonist, Rojack, typify a brand of Jewish masculine anxiety and vengeance as he assaults a German maid. These writers ushered in an explicitly Jewish sensibility to American letters and made a goyische audience work to understand the culture it emerged from. They creaked open the window of the Jewish mind and let all comers have a look around, but they didn’t label all the Judaica inside.

In the realm of standup, Borscht Belt comics held the ground that “Big Mouth” is now claiming, but once they found bigger audiences beyond the Catskills, they either tempered their Jewishness like Rodney Dangerfield or Don Rickles or maintained a more-or-less ghettoized career a la Henny Youngman.

Hollywood is notoriously tentative in its approach to a type of American Yiddishkeit, even as Jews helped form it. In the heyday of Dustin Hoffman, films were stocked with crypto Jew protagonists like Benjamin Braddock. In an age of diverse TV programming, the goy-veneered home of ABC’s “The Goldbergs” stands in for representation. And even as Apatow made a splash, he presented Judaism in a broad, non-provincial stoner-y way. The Jews of his world don’t go to temple and they probably wouldn’t get the dog wig joke.

“Big Mouth” disposes of ambiguity in a triumph of identity. But it also embraces something that may make many Jews itch: A frankness about the human body and sex, something Roth and Mailer, and to a lesser degree Bellow, were excoriated for. The show is often a sort of smutty riff on an educational cartoon’s format. Talking vulvas, compulsive masturbators, a song about menarche, deviancy with pillows and furry animate phalluses all factor in here. When this objectionable content melds with overt Jewish signifiers it can raise alarms among the community. But reservations should be put aside to appreciate how rare of an artifact the show is. While a like “Mrs. Maisel” is Jewish by dint of its story, “Big Mouth” is Jewish in spite of it. It wants to be Jewish when it could more easily be generic.

Overall, the show’s good for the Jews because it’s good. It feels like nothing else on TV with its ordered messiness, its perverse whimsy and its gameness to push boundaries and get weird. Yes, a naked disco at a Korean spa spreading the gospel of body positivity. Yes, a pit bull named “Pitbull Featuring Ludacris” with an eating disorder. Yes to the ghost of Duke Ellington. Yes even to the elderly Temple usher whom Duke recognizes as his agent “Jew Fishman.” Putting aside the obvious winks to the Cohanim in the audience, this manic creativity is the show’s most Jewish feature and one we should share in the naches of.