(JTA) — Comedian Nick Kroll, host of the eponymous Kroll Show, recently aired a heavy-metal ditty in homage to the pleasures of rocking it late-night in LA’s delis:

Kroll, a former Solomon Schecter student and the squeeze of comedy titan Amy Poehler, name-drops a few LA delis, including Jerry’s, Greenblatt’s, and Langer’s, but the obvious inspiration for the sketch is the connection between Guns N’Roses and Canter’s Deli — as successful a union, in its own way, as that between pastrami and rye. (In case you doubt that’s the inspiration, check out not Kroll’s wig, but also the band member sporting a top hat in clear homage to Slash.)

Dating back to the grade school friendship between delicatessen scion Marc Canter and GNR guitarist Slash, Canter’s Deli was the home of Guns N’Roses from the band’s earliest days. In fact, Canter is such an obsessive and authoritative fan that he’s even written a book about the band’s formative years, stuffed with his own photographs (and available for sale at Canter’s, of course).

Of course, delis have always been a part of the scene for LA musicians. Dr. Dre, for example, used to be a regular at Junior’s Deli (since replaced by Lenny’s Deli), which was near his office.

But Canter’s has two additional advantages over its rivals when it comes to wooing the rockers. One is that it has its own venue, the Kibitz Room, to host rock shows. And the other is that since it’s open 24/7, you can truly rock all night long. Don’t try that at Langer’s. They close at 4 PM. 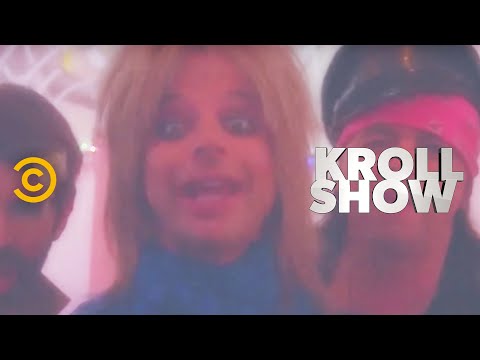