Andrew Ridker was writing about Jewish novelists before he became one.

I know this because we were college classmates, and I read a fair portion of Andrew’s thesis on Philip Roth. Before the close reading of “American Pastoral,” I read some of Andrew’s early poetry — more on that, later — and at least one short story. 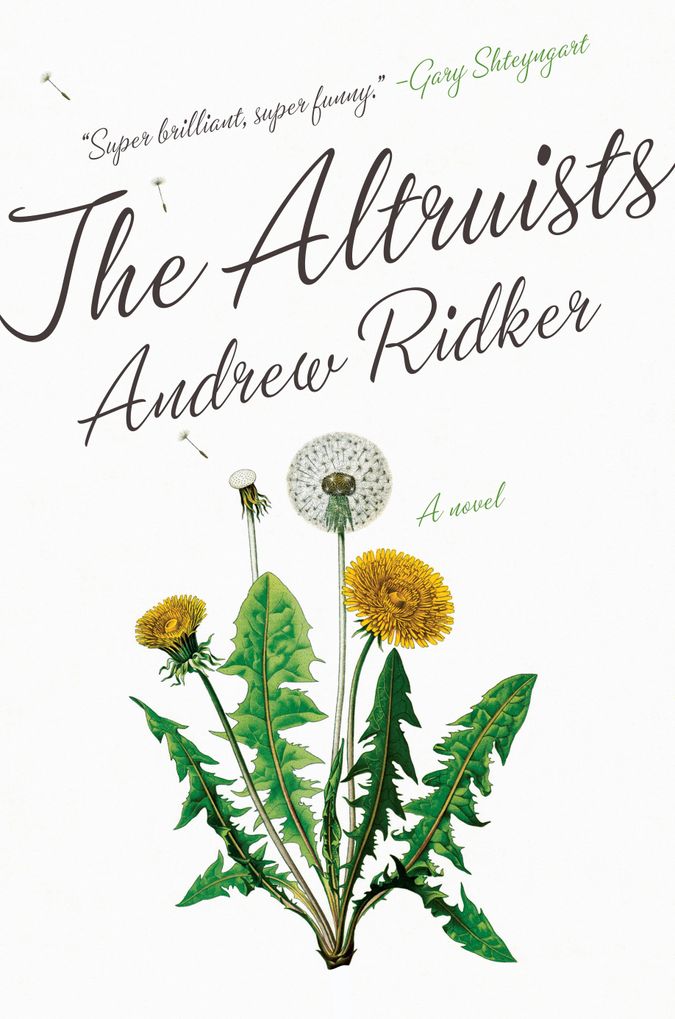 “The Altruists” by Andrew Ridker. Image by Courtesy of Viking

Now he’s published his debut novel, “The Altruists,” set partially in St. Louis, the city where we attended college. It’s a novel about a supremely dysfunctional family, a pair of neurotic siblings in their 20s whose relationships with their feckless father become toxic after their mother dies, leaving them a substantial amount of money and bypassing her husband. Among its many good qualities, it nicely interrogates the moral failings of our alma mater. Well, sort of. Again: more on that later.

Andrew and I lost touch for a few years after graduation. But New York throws people together, and after I almost fell over him while fighting my way off a subway last summer, we became friends. He’s in his last semester as a Writing Fellow at the University of Iowa, and we chatted about “The Altruists” over the phone while he suffered through the midwest winter. What follows is a very biased conversation, edited for clarity.

Talya Zax: I always thought you were very clued in to the world of Jewish literature. Is that accurate? What was your entry point?

Andrew Ridker: My parents were big Philip Roth readers. From there, I discovered Bernard Malamud and Saul Bellow. From a young age, those were the grown-up books on the shelf to be taken down.

You once mentioned to me that although the central characters in “The Altruists” are Jewish, you saw the novel as only tangentially Jewish in subject matter. How did you choose to approach that facet of this work?

This is the internal debate I have, which, of course, is echoed in the broader conundrum of secular Jewishness in America: How Jewish am I? How Jewish is the book. Who gets to make those decisions? I didn’t think I was writing a Jewish book, and then I showed it to friends and family who told me it was 100% Jewish. The central themes, in my view, are money, morality and family, and I think I approached those from a Jewish context, but I didn’t realize that at the time. The book is Jewish in exactly the way I’m Jewish. It’s not at the front of my mind but takes up a huge amount of space in the background.

This book is rooted in St. Louis, where we went to college. Did the city’s character influence the novel’s formation?

Going to college — particularly a private university — in a city is obviously not a representative look at a place. I think I had a limited exposure to the city in the years that I was in St. Louis. At the same time, it was the first place I ever lived for a sustained period of time away from home. My antennae were up. I noticed things I wouldn’t have noticed in my own home. I started to find myself being drawn to spaces in the city that seemed like good staging grounds for issues of class. So there are a lot of scenes set in exclusive spaces, like gated neighborhoods and museums, and then there are more public places like parks or the botanical gardens. Spaces where people seclude themselves, and places where people are forced to interact across boundaries.

When did you know you wanted to be a writer?

By high school, if not before. But when you decide that you want to be something when you’re 13, you don’t have any idea what that profession looks like. My idea of being a writer was Parisian cafes, being a bohemian layabout. But I’m very poorly suited to be a bohemian layabout. I’m way too neurotic and I can’t hold my liquor very well. The actual writer’s life, which in my case involves waking up early and sitting alone for a few hours, was very well suited to the person I grew up being.

All the names of our college institutions are changed a little in “The Altruists.” It’s Danforth University, not Washington University, etcetera. Why the changes?

I feel that if I can tweak reality a bit, it gives me room to imagine. I can base something 95% in fact, and it’s that 5% difference where the exaggeration and jokes come in. I wanted it to be recognizable to people in the know, but just fictional enough that I could make it a little more grotesque than it really is.

I was surprised by how much one character’s arc relates to our very own senior week at WashU. Sorry, Danforth U. Did you take a lot of notes during senior week? What kind of beer did you bring on the float trip?

I did not take notes during senior week, but it left a oddly profound impression on me. Something about the sight of a couple hundred college seniors, many of whom came from privilege, as I did, very lazily floating down an incredibly slow-moving river almost metaphorically into adulthood, just stuck with me and bothered me.

Regarding the beer, I remember hitting that point where you think you’ve drunk your share of Bud Light, and now is the time to become a connoisseur and drink pale ales and IPAs, which do not exactly go down well in scorching Missouri heat.

When did you first find a writing voice that felt natural to you?

I remember attempting to write a novel somewhere in the middle of college, and eventually I gave it up. During college and after graduating I worked in a lot of different forms and styles. I thought when I started “The Altruists” that I had discovered my style. I found myself in a very comfortable place: third person, character driven, snark and earnestness balancing each other out. Then I looked back at this novel I’d abandoned, and it was still terrible, but it was in the same voice as “The Altruists.” So I found my way back to it.

Speaking of terrible, I’m going to read you an excerpt of one of your poems from our freshman year, and you’re going to tell me what you think of it. This comes from a poem called “Ars Poetica”:

”A critic once called his work ‘magical— with a deft sleight of hand, his poems appear like doves from a puff of smoke, and when you try to grasp one, they seem to vanish altogether as quickly as they came.’”

Utter drivel. If I’m remembering that poem, it’s about a writer who gives a reading, and instead of reading from a manuscript reads from a dead bird. I, um. Uh. Yeah. I think for undergraduate writers, birds carry a lot of weight. They, especially dead birds, appear to be a shortcut to profundity. But I had absolutely no idea what that poem was about, or what the bird was supposed to represent.

Fair is fair, so here’s something I wrote in that same class. “My ears are odd, my ears are disparate, my ears are exquisite… They bicker constantly but unite to communicate the most extraordinary beauty. Regardless of the true home of passion, mine always originates in my ears.” Please critique.

I commend you on being ahead of the curve [regarding] body positivity. It feels like the kind of essay that a teenager would write, and I suppose did write, about coming to terms with a feature of their body they’re self-conscious about that no one except them has ever noticed. You’re staring at yourself in the mirror, praying no one notices whatever thing you think is wrong with you, and it feels incredibly brave to write about it. And no one in the classroom has thought about your ears before.

That class put together an anthology at the end of the year, and you and I willingly included these pieces in it.

I remember our class had almost no social cohesion, so we called [the anthology] “Sitting in the Dark” because every day our professor would walk in [and] we’d be sitting in complete silence with the lights off because nobody was friends. It was very depressing.

What are some interesting Jewish books we should all be reading?

I always get excited about “Oreo” by Fran Ross, which is one of the funniest books ever written; it mixes Jewish humor and black humor to create a very unusual hybrid. And having read Bernard Malamud’s most famous works, I ended up reading his novel “God’s Grace,” which is a thinly-veiled allegory for nuclear war. The Americans and Russians blow up the whole world, and God forgets this marine biologist who’s underwater when the bombing happens and surfaces to find he’s the only man left on earth. He trains apes on this island in religious tradition and there’s a romance, and religious rebellion. It’s one of the most batshit books I’ve ever read.

Your cover photo on Facebook right now is from “Herschel and the Hanukkah Goblins.” Please explain.

In the scene from that photo, one of the goblins gets his hand caught in a pickle jar. He’s holding on to, like, five pickles. Herschel says, just take out one pickle, and the goblin takes out one pickle and his hand slides out of the jar. It’s a story to teach kids about not being greedy, but the collision course of tropes that are in play when a greedy goblin is trying to pull pickles out of a jar to ruin Hanukkah is insane.

In my email inbox, the first thing that came up when I searched for you was a 2010 invitation to like “DJ Whoquestion” on Facebook. Any comment?

If I say no comment, that will imply there’s a story there. I’ll stick with no comment.