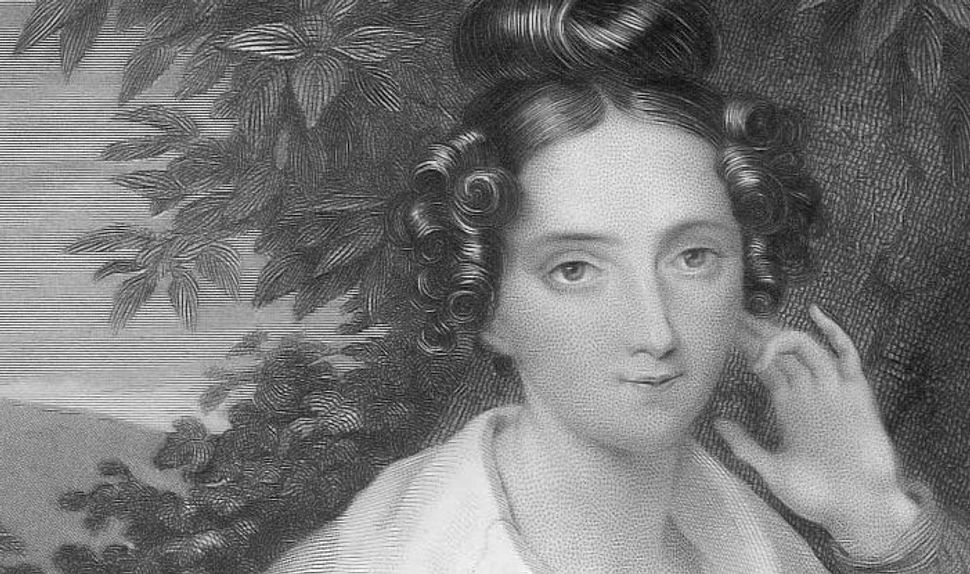 If you know about Rahel Varnhagen, it’s probably because of Hannah Arendt.

Arendt called Varnhagen, born Rahel Levin in 1771, “my closest friend, though she has been dead for some hundred years.” The two shared a background; both were well-off German-born Jews. They shared an intellectual daring and determination; while Arendt, born in 1906, would become one of the most influential philosophers and writers of the 20th century, Varnhagen established an elevated status in German intellectual society that was unprecedented for a Jewish woman. But most importantly, the duo shared an outlook on the problem posed by their Jewish identity in the German Christian world in which they lived.

“If we should start telling the truth that we are nothing but Jews, it would mean that we expose ourselves to the fate of human beings who, unprotected by any specific law or political convention, are nothing but human beings,” she wrote in the 1943 essay “We Refugees.”

“I can hardly imagine an attitude more dangerous, since we actually live in a world in which human beings as such have ceased to exist for quite a while; since society has discovered discrimination as the great social weapon by which one may kill men without any bloodshed; since passports or birth certificates, and sometimes even income tax receipts, are no longer formal papers but matters of social distinction.”

Just over 150 years before, in a letter from 1975, Varnhaden expressed a similarly morbid understanding:

“I have a strange fancy: it is as if some supramundane being, just as I was thrust into this world, plunged these words with a dagger into my heart: “Yes, have sensibility, see the world as few see it, be great and noble, nor can I take from you the faculty of eternally thinking. But I add one thing more: be a Jewess!” And now my life is a slow bleeding to death.”

To both women, the greatest impediment to being seen as an equal in society — let alone being able to gain the respect they wished for as writers and thinkers — was not being a woman, but being a Jew. And while both would eventually be publicly understood to have overcome both obstacles, in their private lives, each would be intellectually tormented by the complicated influence of their religious and ethnic identities until their deaths. Varnhagen, despite living in a very different Germany than that into which Arendt was born, paved an essential road for her successor.

Varnhagen’s primary impact on German culture was through the salon she hosted in her home, which grew so influential that the period of its peak, in the early 19th century, is in some circles known as the “Rahelzeit.” She wasn’t aristocratic by birth, yet she managed to attract royalty to her home; they were, as Adam Kirsch wrote in The New Yorker in 2009, “drawn to her freedom from social convention, and to the exquisite sensibility that informed her cult of Goethe, her extensive correspondence, and her love affairs.” But despite its power, her intellectual and social light, which attracted visitors ranging from Prussia’s Prince Louis Ferdinand to the philosopher Moses Mendelssohn to the seminal writer Johann Wolfgang Goethe, was not enough to protect her from the force of anti-Semitism. As the Napoleonic Wars intensified they sparked a surge of nationalism in the Berlin milieu amongst whom Varnhagen had made her home. They began to reject her, to the extent that her eventual husband, Karl August Varnhagen von Ense, a Christian to whom she was already engaged, refused to marry her until she converted.

Convert she did, but her alternate revulsion toward and attraction to Judaism continued to be a preoccupation. After her death in 1833, her husband reported that she had, in her later years, once said “What for a long period of my life has been the source of my greatest shame, my most bitter grief and misfortune — to be born a Jewess — I would not at any price now wish to miss.” But Varnhagen, aware that the subject was taboo in the circle she had worked so fervently to cultivate, rarely wrote of it; the letter quoted about is one of the few written instances in which she addressed the issue of her identity head-on.

Varnhagen’s sensitivity to addressing her Judaism in print was surely, in part, a consequence of her chosen medium as a writer: Letters. As Barbara Hahn notes for the Jewish Women’s Encyclopedia, “What is perhaps most astonishing about her is that she created a new practice of writing. She was not the only woman who concentrated on epistolary writing; but from the outset she was aware of the particular implications of letter-writing and worked to establish a network of people who would self-consciously engage in this as a common enterprise.” Varnhagen expressed an intent for her letters to be preserved and published as early as 1800, began to publish epistolary correspondence in literary journals in 1812, and before her death worked with he husband to begin assembling a collection of her letters titled “Rahel. Ein Buch des Andenkens für ihre Freunde,” or “Rahel: A Commemoration for Her Friends.” That work, initially intended as a single volume, eventually — under Karl Varnhagen’s guidance, after Varnhagen’s death — expanded to a collection of her exchanges with a number of correspondents that eventually numbered 1,600 letters.

Varnhagen was well aware of her impact on German society, but didn’t live to see the cultural resonance of her letters. The critic Georg Brandes, born nine years after her death, would declare that “Rahel is the first great and modern woman in German culture.” To Arendt, she came to have a different relevance. Her efforts to succeed despite her identity, in Arendt’s eyes, were fundamentally innocent, based in faith that quality of character and soul would surely be enough to ensure recognition. But “it was precisely the soul for which life showed no consideration,” Arendt wrote.

The world had never given Varnhagen due respect, as it would never fully give respect to Arendt, who would always be an exile, no matter how acclaimed. Varnhagen showed her, in a profound and painful way, just what it meant to be a Jew. “All vaunted Jewish qualities — the ‘Jewish heart,’ humanity, humor, disinterested intelligence — are pariah qualities,” she wrote. Varnhagen had them. So did she. The fact that they still lived fundamentally on the outside; well, that was proof enough.