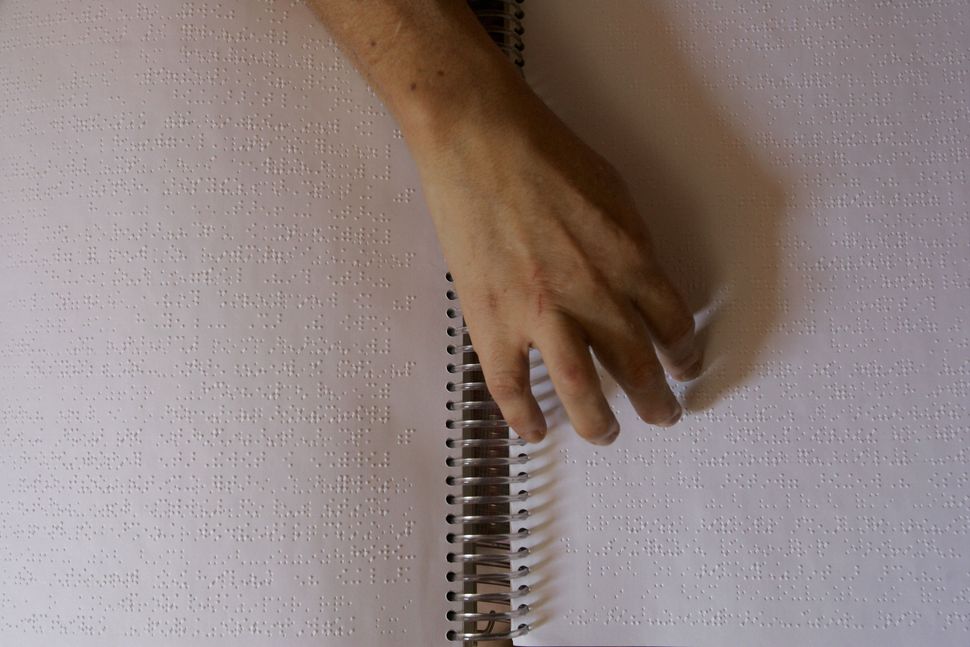 Reading The Bible in Braille Image by Getty Images

Recently, I unexpectedly found myself in an elegant hotel ballroom in Virginia, discussing Yehuda Amichai’s iconic poem “The Diameter of a Bomb” with a deaf and blind poet. As the poet and his interpreters communicated in Pro-Tactile American Sign Language — an emerging language using touch to convey sign language, much in the way that Helen Keller and her teacher, Anne Sullivan, did decades ago — I thought about the magnificent diameter of the world of languages, and the devotion of those who work to widen it.

That Amichai discussion was made possible by Hebrew, English, Braille, ASL, Pro-Tactile ASL and the most beautiful language of all: the language of generosity.

For an introduction to this most necessary language and how it intertwines with Braille, poetry and Jewish text, I recommend the Israeli poet Erez Bitton’s poem to music teacher Elisheva Kaplan, who devoted herself to typing books in Braille; Bitton is blind and often writes about blindness. This is from Bitton’s recent collection “You Who Cross My Path,” translated into English from Hebrew by Tsipi Keller:

with the hard keys of the Braille machine

and nights, page after page, book after book

But what if you could open additional worlds — and render both Hebrew words and traditional Jewish melody into Braille? And if that were possible, could you move the text of the Torah, with its te’amim, or cantillations, also known as trop into Braille?

Te’amim, or ta’amei hamikrah, is the Hebrew term, and trop is the Yiddish term for these musical directions.

The original musical systems were hand signals, as discussed in the Talmud (Brachot 62a). The symbols of the 28 te’amim were introduced by Rabbi Aaron ben Asher (900–960 C.E.), who was from Tiberias. The current written cantillation system has been in widespread use since at least the 13th century, and probably far before that.

Though trop is generally associated with ba’alei kriah, or those who sing the Torah aloud in synagogue, the cantillation system is useful for all readers — even those reading alone quietly — because it indicates where to pause and what to stress. Therefore it deepens a reader’s understanding.

If trop could be available in Braille, then a blind reader could access this centuries-old musical commentary on reading, this link to music stretching back as far as talmudic times.

First, a bit of history on the Torah and Braille. In 1950, a woman named Mrs. Harry A. Cole spent five years making the text of the Hebrew Tanach available in Braille; but trop was not available until very recently. A blind young person who wanted to prepare for a bar or bat mitzvah was forced to memorize the musical instructions for the entire parshah, a process that is both exhausting and rife with potential for error.

Batya Sperling-Milner, who is blind, and her bat mitzvah ceremony were recently featured in The Washington Post; she chanted using a brand-new Braille system of trop. According to The Washington Post, the difficulty of chanting a Torah portion without being able to “read” the trop “led a family friend in Israel, Danny Sadinoff, who is a software engineer, to passionately take up the question of how to quickly create a system [Batya] could use to study.”

I was fascinated by this idea of “translating” a musical system of reading the Torah that is centuries old — of using modern technology to transmit the ancient. I read on, with interest.

“Over time Sadinoff created two things. He made a Braille character to stick in the middle of a Hebrew Braille word that signals ‘A trop is coming,’ and then new Braille characters for all the trops,” The Washington Post reported. “Then he wrote a computer program that translates the trop and combines it with existing Braille Bibles so that a reader can select any Bible verse and have the text with trop. Then a printer can spit out the corresponding Braille on paper.”

I tracked down Sadinoff for more details. (Full disclosure: We went to high school together.)

“The hardest part of the project was defining the problem,” Sadinoff said. “I needed to educate myself quick about various flavors of Braille, and what the possible shape of a solution might look like. Where should the dots go? Where would they be positioned relative to the Braille on the page? Did we need to use dots at all? The hardest technical question was whether to use eight dots or six. If I had an expert around, that would have gone quicker.

“It didn’t help that I wasn’t able to find help early on. Basically, the only person involved who had any experience reading Braille is very, very smart, but was also an 11-year-old girl. So, I made some basic errors along the way as a result.

“It was doubly problematic that Batya is so bright, because on occasion she would encounter bugs in the software and not raise a ruckus, assuming more sophistication on my part than was warranted.

“Another example: Josh Milner, Batya’s father, and I were in the weeds dealing with Mapik-He, which is something that standard Hebrew Braille doesn’t represent very smoothly, and Batya revealed that she not only hadn’t encountered it, but didn’t know what it was.

“That’s an occasion where my guide in Hebrew Braille was simply not experienced enough to know if what we were doing made sense. This was, of course, nobody’s fault other than my own, at not being able to contact the people I needed. I’m in touch with them now.”

So what exactly is the system, and how does it work? I quickly realized that I was wrong in my initial understanding — it’s not a matter of translation.

“No translation is involved,” Sadinoff said. “The correct term is ‘transcode.’ I don’t really combine it with anything, either.

“Sefaria already has combined the trop and the text.”

Sefaria, for the uninitiated, is an online repository of Jewish texts. “It is true that Braille Bibles already exist, but I’ve never actually seen one and am not (currently) using them as input. BRF is a standard file format that embossers and BrailleNotes use. My software emits it.”

Now for the details of how the system works: “It sucks in pointed, cantillated Hebrew from Sefaria and spits out a BRF file, which is a lingua franca suitable for consumption by a Braille display device, like a BrailleNote or further layout and subsequent embossing.”

And it works for the haftorah in the exact same way. Sadinoff worked closely with Batya and her father. “Batya really is a co-author of the encoding as a consultant and teacher to me,” Sadinoff said,” but I wrote all the software.”

If you want to try it yourself at home, Sadinoff generously shares the link https://brith.sadinoff.com/transcode

Instead of doing some coding of my own, I found myself imagining how Kaplan, the piano teacher-turned-Braille transcriber, might have reacted to the idea of a Braille haftorah that, complete with trop, could be used by the very small number of Hebrew Braille readers who keep Shabbat and therefore can’t use an electronic reader. I wondered how she decided what to move into Braille anyway — if she worked alone, or if she had others to consult with.

One home for speakers of the language of generosity is JBI International, in Manhattan, which was founded in 1931 as the Jewish Braille Institute of America to help blind and visually impaired people in the United States. It now helps 35,000 people in Israel, the former Soviet Union, Eastern and Central Europe, Latin America, Western Europe and all English-speaking countries — entirely free of charge.

JBI International offers books, magazines and special publications in Braille, large print and audio; the “Talking Books” are available in English, Russian, Yiddish, Hebrew, Hungarian, Romanian, Polish and Spanish. I was charmed to discover that the volunteer readers of those books include literary celebrities; a January 2, 2009, story in The Jewish Week reported that Cynthia Ozick, Anne Roiphe and Herman Wouk all served as volunteer readers.

And it’s not just literary celebrities who have had some contact with Jewish Braille texts. When the institute moved to a new building in 1959, Keller herself sent this lovely message to its dedication ceremony:

“With pride, I still read the Jewish Braille Review, which the institute publishes for the blind, and bless the spirit of sympathy and brotherhood in which it serves both Jews and Christians in many lands.”

Keller’s phrasing — “sympathy and brotherhood” — also works to describe much of Amichai’s poetry. I found myself thinking about the language Keller used, which combines touch and ASL. If Amichai’s “The Diameter of the Bomb” could be discussed in Pro-Tactile ASL, then maybe the Torah and haftorah, with trop, could eventually cross over to Pro-Tactile, too.

(Note: I am not a software engineer.)

I confess that my immediate thought was that I wanted to experience Isaiah in Pro-Tactile ASL, in a mixture of Hebrew, trop and touch.

What would some of those ancient rants and raves feel like?

I kept thinking back to that piano teacher devoting herself to Braille texts; her labor made it possible for Erez Bitton to become who he now is. I remember my own piano teacher beating entire movements of classical music into my arm, so I can report that touch, long its own language, can certainly teach music. Perhaps it is not too much of a leap to hope that the language of touch can transcode prophecy — just as it has long both translated the language of generosity and transmitted the music of being human.