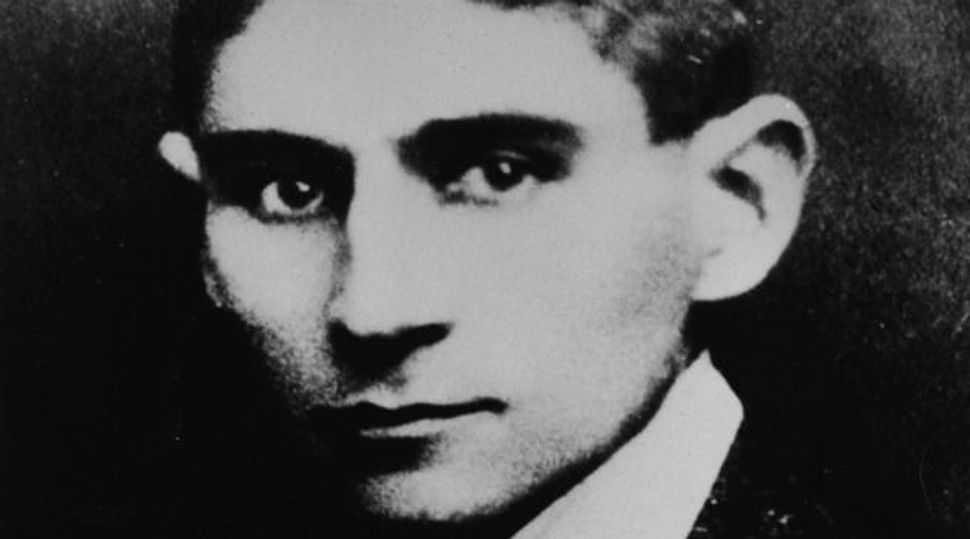 German or Jewish or Both or Neither? Despite his reluctance to make his fictions noticeably Jewish, Franz Kafka often meditated on Jewish themes. Image by Getty Images

Contemporary audiences nearly missed the chance to read most of Franz Kafka’s work.

When the writer died in 1924 at the age of 40, he entrusted his manuscripts to his friend Max Brod under the condition that he burn them. The fact that we still abuse the adjective “Kafkaesque,” is proof that these terms weren’t met. Brod would go on to publish such seminal Kafka novels as “The Castle,” “Amerika” and, fittingly, given some recent news, “The Trial.”

Last week, the Associated Press reports, a Zurich court upheld a series of Israeli verdicts allowing for the opening of several safe deposit boxes containing unpublished works by the author. From under lock and key in Switzerland, the writings, which experts are hoping include endings to some of Kafka’s unfinished novels, will travel to Israel’s National Library in Jerusalem.

The acquisition of this work is part of an Israeli campaign to claim Kafka’s papers as cultural artifacts belonging to the Jewish people.

In 2012 the National Library announced a program for the preservation of Kafka’s manuscripts amid an ongoing legal battle between the Jewish State and the daughters of Esther Hoffe, Max Brod’s secretary. Brod directed Hoffe to transfer Kafka’s papers to an academic institution after his death in 1968 in Tel Aviv. Hoffe instead kept the papers, sold some, and bequeathed others to her daughters when she died in 2008. The daughters, Eva Hoffe and Ruth Wiesler, have since died and now their own daughters are fighting to keep what’s left of the collection in the family.

According to the AP their lawyer, Jeshayah Etgar, characterized the state’s seizure of their inheritance as “first degree robbery.”

Thanks to the Israeli courts, the National Library has been hugely successful in its Kafka restoration project. Following a 2012 ruling the library welcomed documents hidden away in a Tel Aviv apartment kept by Hoffe’s daughters. And in 2016 the Israeli Supreme Court added more manuscripts to the library’s collection by blocking their planned sale by the sisters to the German Literary Archive in Marbach. With the cooperation of the Swiss court, the institution is within striking distance of amassing all of Kafka’s known writings.

“We welcome the judgment of the court in Switzerland, which matched all the judgments entered previously by the Israeli courts,” David Blumberg, the chairman of the library told the AP. “The judgment of the Swiss court completes the preparation of the National Library of Israel to accept the entire literary estate of Max Brod, which will be properly handled and will be made available to the wider public in Israel and the world.”

Saved once from the cinders and now from a Swiss vault, the work will likely be posted online in accordance with a 2012 pledge by the library’s director, Oren Weinberg.

The verdict is far from what Kafka would have wanted, but the fact we know his wishes at all is thanks to Brod’s foresight. Sometimes our friends just know better than we do.