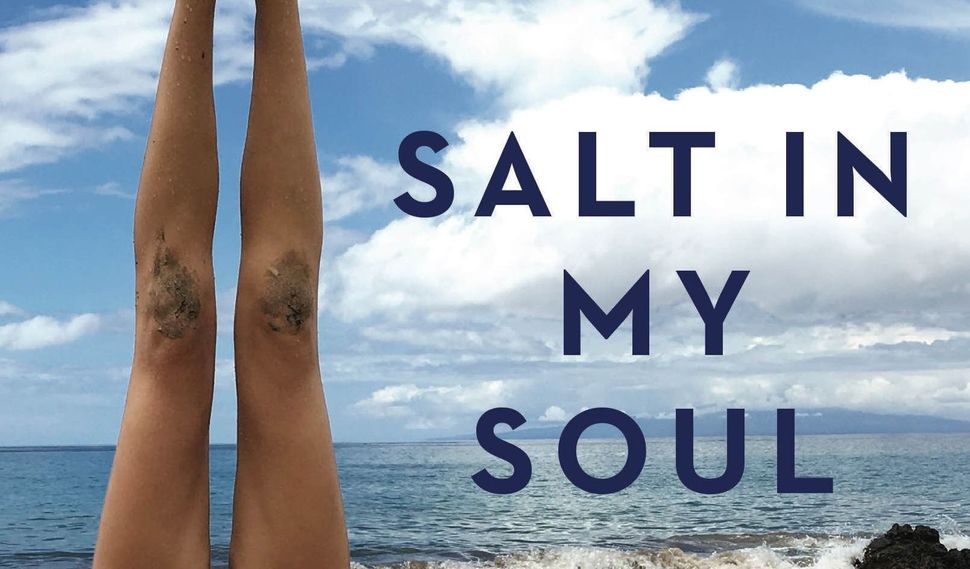 Mallory Smith’s “Salt in My Soul.” Image by Courtesy of Spiegel and Grau

Mallory Smith’s memoir “Salt in My Soul: An Unfinished Life” may prove the most difficult book you’ll ever read.

Because you know the ending.

Smith was just three years old when she was diagnosed with cystic fibrosis, a progressive lung disease for which there is no cure. A defective gene causes a buildup of mucus in the lungs, which decreases breathing capacity. And while cystic fibrosis requires daily treatments, patients can often live something approaching a normal life. Until they can’t.

“Salt in My Soul,” which chronicles Smith’s battle with cystic fibrosis before her death at age 25 in 2017, could have been — perhaps should have been — a bitter and angry book. What makes the book sweet is Smith herself, a young woman with preternatural wisdom and a carpe diem attitude. She was a high school athlete who played volleyball, swam, and surfed in Hawaii at every opportunity. She graduated Phi Beta Kappa from Stanford. She built a career as a freelance writer. And her never-quit attitude pervades her memoir, which is drawn from the diary she kept for the last 10 years of her life, totaling 2,500 pages. In those pages, Smith described joyous moments riding a wave alongside the heartbreak of regular emergency room visits and lengthy hospital stays. Smith asked her mother, Diane Shader Smith, to edit and publish the diary after she died.

After all, Shader Smith had been there with her every step of the way. And in her way, she still is today.

Shader Smith and I spoke on the phone; she was in northern California, fresh off a speech promoting awareness of cystic fibrosis. Unsure of how to proceed, I asked if she finds all this — the speeches, the interviews — to be painful.

“No,” she said. “I mean, every minute of every day is painful, because I lost the most precious person in my life. I’ve done a lot of interviews and I know how to leave the emotion at the door. It’s my coping mechanism. I like to grieve privately.”

Smith was a private person too, Shader Smith says. It’s why she kept her diary to herself. “She didn’t want a pity party.”

I asked Shader Smith to walk me through how Smith was diagnosed. She gave the concise version of the story: She was six months pregnant with her third child when doctors discovered the fetus had cystic fibrosis and told her she had to terminate the pregnancy. They explained that the girl she carried had no future.

About a week after going through with the abortion, Shader Smith was in a beauty salon getting a haircut when she burst into tears. When she explained why she was crying, her beautician said she had a client with cystic fibrosis. And when she went on to explain the symptoms “I had a complete panic attack.”

Smith, Shader Smith’s second child, had those symptoms: A constantly running nose and crazy bowel movements. “But four different doctors told me nothing was wrong [with her],” Shader Smith said. “I’d get calls from her pre-school to pick her up because she was symptomatic. But the doctors told me she was perfectly fine.”

The Smiths took their daughter to a specialist. “I was at a bris when my pager went off,” Shader Smith said. “I went upstairs, called, and the genetic counselor told me Mallory had cystic fibrosis. I remember wailing.”

“Within two hours our lives changed. We had special equipment delivered to our home. I did not entertain the notion that she was going to die. I didn’t want to live that way. I didn’t want her to feel that way.”

Life became a roller coaster. One day Smith would compete in an athletic event, and the next she’d be rushed to the emergency room. There were daily treatments, which included pounding on Smith’s chest to break up the mucus that had congealed in her lungs.

Shader Smith, who is in public relations, and her husband Mark, an attorney, had to be available on an instant’s notice. At the same time, they had to keep the life of their son, Micah, continuing at an even pace.

I asked if she blamed God. “That’s the problem,” Shader Smith responded. “I don’t believe in God.”

“I identify strongly as a Jew,” she said. “But I can’t believe in a god. How could there be a Holocaust?”

In “Salt in My Soul,” Smith describes her family as atheist Jews and regularly references her Judaism, whether in her choice of music — “I’m listening to Kol Galgal right now, btw, by Shoteil Ha’nevuah” — or her partying: “It was like a big Stanford reunion crossed with a ritzy bar mitzvah”.

Smith also tells the story of a meal that her non-Jewish boyfriend, Jack attended with her parents. “He knows nothing about Judaism and it was a Shabbat dinner,” she writes, “so he got a full-on Jewish education, learning about the kiddush cup and the prayers, what a Seder is, the story of Passover, what a kippah is, etc.”

I asked Shader Smith if she hosted Shabbat meals regularly. She said no, but that Judaism had been a central part of their family’s life. “When I met my husband [who was not Jewish], I said to him ‘I’m Jewish and I’m an atheist. Buy I want my kids to have bar mitzvahs and go to Jewish summer camps. I want to have bagels and lox on Sunday mornings,’” she said. “He said, ‘Okay, you can pick the religion, but I get to pick their names.’”

“Then he came home one night and told me he had converted. He’d been taking classes behind my back. He said ‘I want to be the same religion as my children.’”

But neither Smith’s active life nor loving family could stop the disease’s progress. Smith’s lungs had been invaded by a superbug that did not respond to traditional antibiotics, and by mid-2016 her doctor offered a dire prognosis. Smith wrote “it wasn’t new information. Dr. M. was just flicking on the lights so we could see what everyone else already had seen.” A lung transplant looked like Smith’s only option.

Because of her infection, Smith was rejected as a transplant candidate by both Stanford and the Cleveland Clinic. Ultimately, she was accepted by the University of Pittsburgh Medical Center, but only after experiencing bureaucratic foul ups with her medical coverage. Finally, in April 2017, she was called in for what she believed was her surgery, only to discover that she was a back-up candidate in case the real transplant went south.

That August she was called in again, rushed to the hospital only to find out that the lung she was supposed to receive was damaged when it arrived.

Finally, in September 2017, Smith received new lungs. Unfortunately, part of the transplant process required suppressing her immune system. And then the superbug returned. She passed away on November 15, 2017.

I asked Shader Smith if it was possible to go back to a normal life. “No,” she said. “I don’t ever want to stop talking about her. I live in fear of the day that people aren’t going to care anymore.”