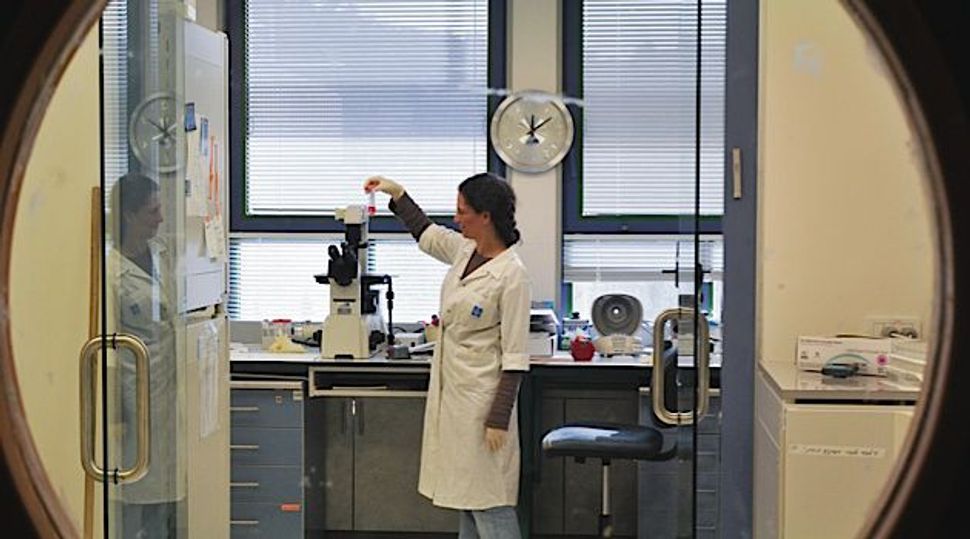 Seeking Answers: Researchers at Hadassah Medical Center in Jerusalem apply their understanding of Jewish genetics and diseases such as cystic fibrosis to inherited disorders among Palestinians. A new gene is discovered about every 50 days, many from Palestinians. Image by avi hayun

For generations, one Palestinian village just east of Jerusalem watched young adult after young adult lose their lives to a disabling disease.

Eventually, the villagers learned that the previously unnamed killer was cystic fibrosis, a recessive genetic disorder that thickens mucous in the lungs and leads to life-threatening infections. But they failed to grasp that its incidence was high because the village has a particularly high concentration of carriers — and people tended to marry within the village.

Now, Israeli doctors are working to prevent this tragedy from continuing.

Over the last ten years Eitan Kerem, a Jewish doctor from Jerusalem, has worked with a Palestinian physician in the village to create a culture of genetic testing, similar to what exists among Ashkenazi Jews for Tay Sachs disease.

“Most people are now marrying outside the village because of the disease,” Kerem reported. Those who marry within the village consult the local doctor before they do so, and if the proposed match involves two carriers, he helps them consider their options, including calling it off, testing fetuses during pregnancy, or screening embryos before artificial implantation.

This village — which, to avoid stigma, Kerem asked not be identified — is one example of a larger problem of genetic diseases among Palestinians. Such conditions are particularly common due to the tradition of first cousins marriage.

Hadassah’s role in dealing with genetic diseases among Palestinians doesn’t stop at known and researched disorders like cystic fibrosis. Rather, the hospital — founded and still partly funded by the eponymous U.S.-based women’s Zionist organization — is working to extend cutting-edge detective-like work to other disorders. 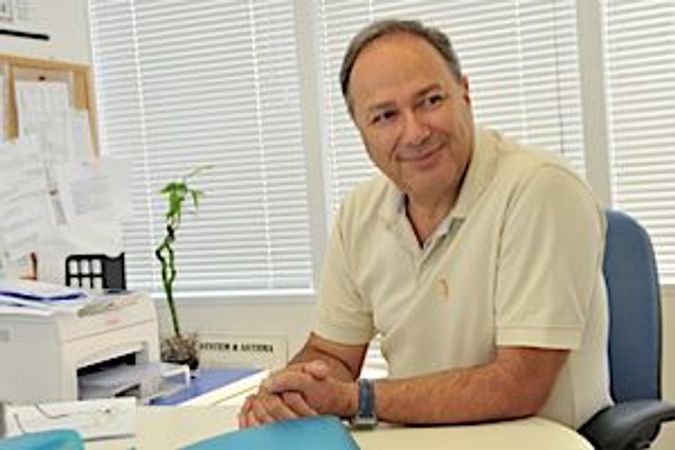 Orly Elpeleg, head of the genetics department, discovers a new gene on average every 50 days, many of them from Palestinians. “It’s not in the books, as the gene so often hasn’t been seen before,” she said.

Cystic fibrosis is one of the 18 genetic diseases for which Ashkenazi Jews are known to be at heightened risk, so Hadassah has expertise on the clinical level, caring for patients. But because there are more than 1,000 different mutations of the gene that causes cystic fibrosis, finding exactly what went awry in each patient is a challenge, whether the patient is Palestinian or not.

Access to Israeli resources makes the Palestinians unusual, as communities with a high level of cousin marriage rarely have access to top medical facilities. “It’s very unique to have such a high level of academic research for such a population,” said Kerem.

Palestinians arrive at Hadassah, as they do at other Israeli hospitals, through various routes. Residents of Jerusalem require no special permits and are covered by Israel’s state health insurance. From the West Bank and Gaza, some are sent and paid for by the Palestinian Authority; some arrange their own travel permits with Israeli authorities and pay for medical attention, receive it free or benefit from research grants; and some come as part of a healthcare program run and funded by the Peres Center for Peace.

At Hadassah, which specializes in genetics, if a patient appears to have a genetic disorder, doctors start their sleuthing by looking into the family. Ziva Ben-Neria, head of the Prenatal Diagnosis Clinic at the Department of Genetic and Metabolic Diseases, explained: “If I have a patient coming to me with hearing loss and eye problems I look first [on Hadassah’s hospital database and by consulting doctors elsewhere and literature] for the [patient’s last] name and if I’m lucky I find another person with the same name and the same symptoms.”

If the gene and the mutation causing it can be identified, not only can more effective treatments be developed, but uncles and aunts and siblings of the patient can be alerted that they may be carriers. If the relatives possess information about the gene, they can get screened. And if they prove to be a carrier, they can choose a partner who is not, or alternatively test their fetuses or screen their embryos.

Sometimes, Hadassah’s experience means that doctors can make connections between families even when they have no shared ancestors to help them solve the mystery of what is afflicting a patient.

“A few months ago I had a Palestinian from Jordan with a boy and a girl with a disease of the bones which means that bones are broken very easily,” recalled Ben-Neria. “When I saw them I thought ‘I know what you have.’

“Given that we know families from an East Jerusalem village with similar problems, we went to do a genetic test and found that they were carrying the same mutation in the same gene,” even though they had no immediate relatives or relatives that they even knew about with the disease.

When doctors made that connection, it saved the family money. The cost for the genetic test was $200 to prove that the doctors’ hunch was correct about the exact mutation. If the entire gene had to be sequenced to determine the mutation, it would have cost $2,000. Also, instead of waiting for weeks to understand their condition, the children within days started treatment and then returned to Jordan with a diagnosis and suggestions for additional care.

Sometimes Hadassah doctors suspect that a Palestinian patient has the same disorder as a previous Palestinian patient. They will then ask the earlier patient to give blood samples to help prove the link. Patients tend to agree, even if they have to pay to give the samples, realizing that any research stands to benefit the family, Ben-Neria said.

If doctors don’t have a precedent for a disorder, they start from scratch, taking blood and conducting a full examination of the DNA in an effort to identify the disease and the mutation. When they take the step of referring patents for analysis of the exome, the protein-encoding part of the genome, they identify the mutation in 70 percent of cases, Elpeleg said. Hadassah researchers say they have identified 21 previously unknown disorders that have been published in scientific peer-reviewed journals and a much larger number that have yet to be written about. When they identify a disease for the first time, they can provide screening and genetic counseling for the family, and start the process of developing treatments — just as they do with better known diseases.

Along with its ongoing relationships with Jewish patients with genetic diseases, Hadassah keeps touch with hundreds of Palestinian families it has diagnosed. The families make contact when they plan to have a baby or at the beginning of pregnancy to discuss their options or request a pre-natal diagnosis.

Hadassah staff see their help for Palestinians as part of their profession’s universal reach. “We avoid politics and see our patients just as human beings,” commented Kerem. That said, the Peres Center for Peace, which brings more than 1,000 Palestinians to Israel for treatment most years, including hundreds to Hadassah, believes this work has importance beyond medicine.

Said Rachel Hadari, coordinator of the center’s healthcare project: “Just the contact has significance — Palestinians see all of a sudden that Israelis are not just the enemy.”