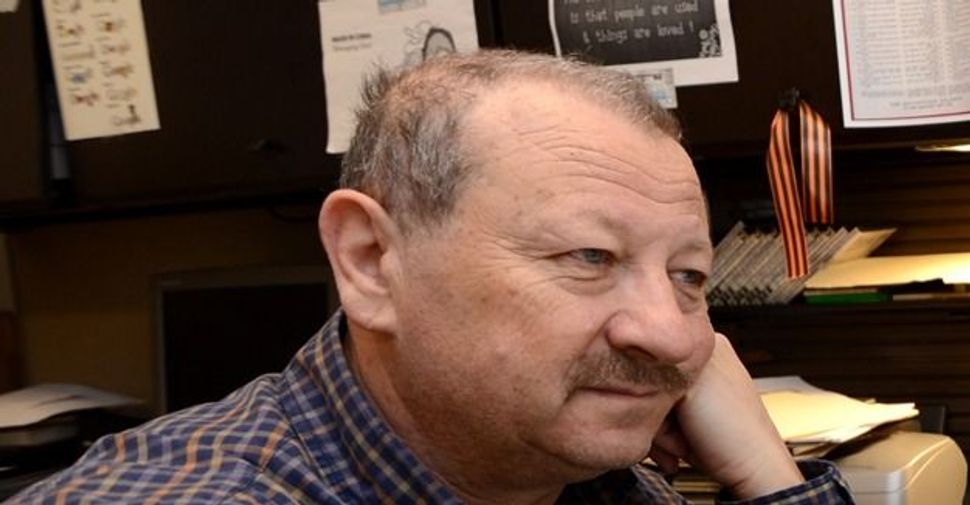 It’s often said that one’s first impressions are usually the strongest, although not necessarily the most precise.

Although I experienced a number of memorable moments during my 18-year tenure as the editor of the Forverts, my first day at work is especially etched in my memory.

It was January 1998. The Forverts office was then located in a red brick building on East 33 Street, and the paper still appeared in a weekly printed edition of 32 pages. The Forverts was a legendary institution in the Yiddish world, not only because, at over 100 years old, it was the longest-running Yiddish paper in America. Both its supporters and opponents were equally astonished that it was still coming out every week — and that people were actually reading it.

By the time I arrived as a new staff writer, it had been years since the Forverts had hired any full-time staff. The general mood among the remaining employees was gloomy. They believed there were no suitable candidates for new staff writers there since “there weren’t any Yiddish writers left,” and they saw no point in hiring anyone, since the Yiddish language — they said — was going under anyway. Let it continue until its last days. Or as we say in Yiddish: A farshlepte krenk iz a geviser toyt — a chronic illness means certain death.

The gloom and depression were like two worn-out flags, draped over the beaten-down barricade of the Yiddishist struggle. The Old Guard kept mourning the past, because that was when they had been surrounded by masses of Yiddish speakers and because they themselves were now old and sick, exhausted by their battles, including those closest to them.

In Israel, where I had settled before coming to New York, the Yiddish writers and journalists didn‘t hold the Forverts in high regard. There was a joke going around about the Forverts editor, Mordkhe (Mordechai) Strigler that alleged that for every issue he wrote one long article, which he then divided into parts, giving each a headline and a different pen name.

The joke wasn’t completely off. Strigler was a brilliant writer, but allowed very few articles by other writers into his paper. Every week the issue was filled with so many of his own articles, analyses and polemics that even the few writers on his staff could hardly get a piece onto one of its 32 pages.

On my very first day as a new writer at the Forverts, Strigler wasn’t there. He wasn’t there the next day either, nor the next. A rumor began spreading that my getting hired had apparently caused the editor to fall ill.

The news editor, Jacob Goldstein, a friendly man in his 80s with confident posture and a thick head of hair, greeted me with a smile. He turned his hearing aid a bit and asked loudly: “So how are things going there?” “There” meant Israel, where there was never a shortage of news; he wanted to hear it from me, since I had just come from “there.”

So I began to tell him the latest. Goldstein listened patiently. At one point he began moving his hearing aid again and apologized: “Can’t hear a word… need to change the battery again.” He cheerfully patted my shoulder and added: “That’s good, Yiddish needs young workers!”

There were two other people working in the newsroom beside Goldstein and myself. Their task was to translate the news from the Jewish Telegraphic Agency, which Goldstein would pull out of the fax machine and carry over to them. Goldstein brought me over to an elderly man sitting bent over his narrow desk, writing rapidly in a spiral notebook, as if trying to nail the words before they escaped. As he scribbled, the tip of his tongue languished in the corner of his lips, like that of an industrious young student focused on his task.

It wasn’t until Goldstein called out the man’s name that he lifted his head. “This is Mr. Rak, our oldest writer. I’m a kid next to him.”

I later learned that Rak was just one year short of 90. Despite that he was in good shape, and in addition to translating the news he would write a lengthy article each week, which Strigler would cut in half. Frequently Strigler would hand the article back while saying “This time you went on way too long. There’s no more room in this issue.”

After Goldstein introduced us, Rak lifted his head and managed a smile, which quickly disappeared. “Have you come for long?” he asked, as if I were a visitor in New York just dropping by to meet the editorial staff of a Yiddish newspaper. Apparently he knew the answer, because his balding head quickly turned back to his notebook and he continued writing.

Behind his back stood a typewriter. There were two typewriters in the newsroom: one on the desk next to the editor and one in the newsroom. Both were so old that their keys with Yiddish letters seemed to be stamped with Forverts history. The fingers of dozens of journalists had typed out their views and emotions on those keys. Now only two people still used them: Strigler and the young man sitting at the desk next to Rak’s, whose old-fashioned name, Yerachmiel, seemed more like a name for the typewriter than for the flashily-attired person sitting in front of it.

Yerachmiel Fishbein, as he introduced himself, was decked out in a double-breasted red suit suit with golden buttons. The tip of a yellow handkerchief peeked out of his breast pocket. His fair-complexioned face bore the automatic smile of a typical American, but his eyes looked me over coolly.

In the next few minutes I learned that he knew five languages and was a homeopathic doctor.

“Do you know what homeopathy is?” Fishbein asked. “The British Queen Elizabeth is a big fan of homeopathy,” he said. “I actually received a special honor from her.”

Goldstein waved his hand dismissively and returned to his desk, which stood by the window, separated from his news writers by a portable dividing wall.

Fishbein laughed, pointing to Goldstein. “Our natshalnik doesn’t like me,” he said. Natshalnik is the Russian word for commander.

“Is there anything to like?” Rak grumbled, as he continued writing. “A meshugener.”

“I will kindly ask you not to give our new colleague a crooked impression of me,” Fishbein blurted out. “You’re a provocateur!”

In those days, few people imagined that the virtual world would soon take over the empire of the printed word. In the early 1990s the technology used to publish the Forverts had already made a huge leap forward when the handful of typesetters moved from the building’s basement to its fifth floor, where they worked among the editorial staff. Rather than operating the huge linotype machines with which they had worked previously, the typesetters started typing on computers, transferring articles that staff writers and foreign correspondents had submitted written either by hand or on a typewriter.

There were three typesetters, whose room lacked a window: Lozer (Louis) Katz, Shloyme Rubinstein and Ben-Ami Perlov. When one of them went on vacation, the typesetter Yosl Dursztman would be asked to come in.

I quickly learned that the higher a natshalnik was in the hierarchy, the more windows he had in his office.

The typesetters’ room was called the composing room, and the typesetters were called composers. Having just come to the United States, my ear wasn’t yet attuned to English words and phrases, yet still I thought using the word “composer” for typesetters seemed awfully strange.

The composers at the Forverts were the last remnants of the typesetting trade, once central to the printing of a newspaper. In their work, their lungs had filled with dust and their hearing had been deafened by the clanging of the machines. That old trade now united these five individuals from diverse backgrounds: the Ger Hasid, Reb Shloyme; the apikoyres, or skeptic, Ben-Ami, and the Bundist, Mr. Katz. A spritely Polish Jew, Katz served as the union representative for the typsetters, as well as for the copy editor, a Chabadnik named Yehoshua Dubrovsky, who worked in a separate room with a Satmar Hasid named Moyshe Deutsch.

As the graphic designer, Deutsch sat in a corner; he liked to demonstratively separate himself from the typesetters. Thank God he wasn’t a member of “their union,” he would say; he was his own boss. Deutsch frequently reminded anyone who would listen that his employment at this “treif” newspaper was just one way to earn a living. He also wrote articles for a Satmar Yiddish newspaper and created and sold Yiddish typesetting software.

Even before coming to New York, I thought the design of the Forverts pages was odd. In no other paper had I ever seen an article start, say, on page 18 and continue on page 9. (Yes, the Forverts really did this.) In my first week there I asked the graphic designer why this was. The composing room fell silent. Deutsch continued working as if he hadn’t heard my question. After a moment he mumbled something of which I could only make out two words: “revolution” and “Times.” I think he said: “We don’t need any revolutions here. Take a look at the New York Times and you’ll see the same.”

Despite it all, my relations with the staff went well. Years went by. Katz, the last remaining member of the Old Guard, left in 2013. The printed edition took on a new appearance, becoming a colorful broadsheet with stories authored by young writers and correspondents from close to 25 countries.

The print edition of the Forverts had a historical mission. During its 122 years, hundreds of Yiddish writers had their first works published in its pages. A number of them became part of our national cultural legacy. Four generations of Yiddish readers shared the paper with their family and friends. Can any other newspaper boast such a long tenure and such a long creative history?

I’d like to end on a happy note, by wishing our friend and fellow writer, Jacob Goldstein, mazel tov upon reaching his 100th year! His diligence and dedication to the Forverts no doubt contributed to its very long life.