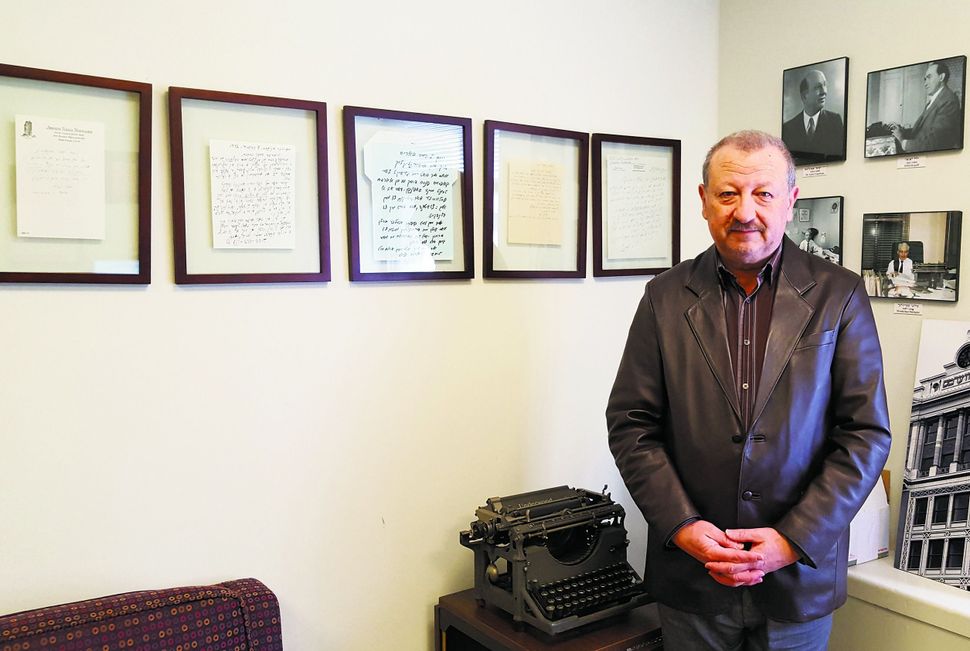 Before World War II, the town of Bălţi (in Yiddish, Belts, not to be confused with Belz in Galicia) in the Romanian, formerly Russian, province of Bessarabia, was not different from thousands of shtetls of Eastern Europe. What was exceptional, though, was that it largely retained its Jewish character during the 1950s and ’60s, when it became part of the Soviet Socialist Republic of Moldova. After World War II, Moldova, which was annexed by the Soviet Union from Romania in 1940, had the highest proportion of Yiddish speakers among all Soviet republics.

In Belts, Yiddish was a language of daily communication, used not exclusively by Jews but also by some of their Christian neighbors. The uniqueness of this situation was due to the history of this region during the war. When the Romanian army, with the help of their Nazi German allies, recaptured Bessarabia from the Soviet Union, they brutally expelled Jews across the river Dniester to the ghettoes in so-called Transnistria, a territory in the southern Ukraine that was granted to Romania by the Nazis. The subhuman living conditions, diseases, flooding, hunger and cruelty of the occupiers killed more than half of the ghetto populations, but the Romanians did not exterminate Jews in small ghettos as they did in Odessa.

After the liberation by the Red Army in the spring of 1944, Jewish survivors were able to return to their homes and rebuild their lives, but they were not allowed to emigrate, and this is how Moldova became the stronghold of Yiddish in the Soviet Union. Although it was officially recognized by the Soviet state as “the” Jewish language (as opposed to Hebrew that was effectively outlawed), Yiddish, unlike other minority languages, was not taught at any educational institutions. To maintain the appearance, the Soviet authorities supported two Yiddish periodicals and were even permitted to publish a few Yiddish books each year. This literary production was read primarily by the elderly people who received a Yiddish education before the war. In Moldova, many Jews of postwar generation were fluent in conversational Yiddish, but only a few knew how to read and write. How could one become fully literate in a language with a rich literary tradition that had been reduced to a vernacular?

Boris Sandler grew up speaking Yiddish, but the language of his education was primarily Russian. It was in Russian that he first read Sholem Aleichem as a child, and he immediately recognized literary characters among the family and neighbors. Since then, Sholem Aleichem has retained a powerful influence on Sandler’s artistic imagination, but back then a career in Yiddish was of course out of question for a Jewish boy in Soviet Moldova. An accomplished musician, Sandler became a violinist with the Moldova State Symphony Orchestra. But his love for Yiddish and his interest in literature remained strong, and he found a mentor in the person of the Kishinev Yiddish writer Yekhiel Shraybman.

Shraybman began writing in the 1930s in Romania, and for the rest of his life he was a staunch champion of two causes: Yiddish literature and communism. In his elegant prose style he seamlessly integrated the juicy Bessarabian dialect with the formal literary Yiddish, drawing inspiration from his childhood in the provincial shtetl of Rashkov. Shraybman tutored Sandler and a few other aspiring young writers in Yiddish literary crafts and promoted their writing. With Shraybman’s support, Sandler’s first Yiddish novellas appeared in the Moscow literary journal Sovetish Heymland (Soviet Homeland) in 1981. The fact that it was possible for a young author to publish his works in Yiddish in the Soviet Union at one of the lowest points of the Cold War, when the emigration of Jews was stalled and Jewish culture suppressed, may seem implausible to someone less familiar with the peculiarities of Soviet internal politics. Perhaps even stranger is the fact that in the same year, a group of five young Yiddish writers, Sandler among them, was invited to Moscow to study, on full scholarship, in an advanced creative writing program in Yiddish under the auspices of the Union of Soviet Writers. At that time, it was the only full-time program of this kind in the world.

The mastermind of this initiative was the poet Arn Vergelis, the powerful editor-in-chief of Sovetish Heymland. Unwaveringly faithful to the Communist Party line, Vergelis also believed in the future of Yiddish in the Soviet Union and was eager to promote young talents using his considerable influence with the Union of Soviet Writers. Although Sandler’s novellas did not quite meet the ideological standards, as an expert editor Vergelis could appreciate the richness of Sandler’s language and the originality of his creative imagination. With the relaxation of the party’s control during Gorbachev’s Perestroika, Sandler emerged as the leading Yiddish writer of the postwar generation. His first book, a collection of stories that is titled Treplekh Aruf tsu a Nes (“Stairs Up to a Miracle”), came out in 1986, and two years later it was translated into Russian by a prestigious Moscow press. Most of Sandler’s short fiction at that time was grounded in his home landscapes. His characters were simple Bessarabian Jews who spoke Yiddish naturally and fluently. Sandler re-created the Yiddishland of his childhood with great gusto, relishing in its every detail. The thick flow of mundane events is occasionally disrupted by bizarre and comic episodes that expose the absurdities of the Soviet regime. A piece of mamaliga (a Romanian variety of polenta), flies around like a UFO, creating a lot of commotion among the small town officials during the orderly celebration of the Soviet festival of May 1, until it finally hits the bald head of Lenin’s granite monument, breaks into tiny pieces and soils everyone in the town.

A gentle but confident narrator, Sandler is a master of ironic understatement, which betrays his indebtedness to his literary predecessors, from Shraybman to Sholem Aleichem. But he also enriches this vernacular narrative tradition with elements of magic realism, sometimes using them as a device for circumventing the censorship’s restrictions rather than confronting them.

At the turn of the 1990s, Sandler, together with Shraybman and his circle, became the pivot in the revival of Jewish life in Moldova. He edited a bilingual Russian-Yiddish newspaper, ran a Yiddish television show and taught Yiddish at the Kishinev University. He also wrote two documentary screenplays. His social engagements and literary interests have always been twofold, directed toward past and future.

He published valuable documents of the Stalinist persecution of Yiddish culture in Moldova, and in his fiction he began to explore historical experience in search of a foundation for a new revival of Yiddish. When he immigrated to Israel in 1992, he invested his energy and talent into the revival of Yiddish culture. The Soviet experience of self-reliance proved to be no less useful in Israel. Sandler initiated a new Yiddish magazine for children, Kind un Keyt, and, using his very limited personal resources, he carried out an ambitious, time-sensitive project of recording video interviews with Yiddish writers and scholars, which are now available on DVD. In Israel the magic lenses of his fiction became sharper and more focused, enabling him to see the past through the present across the geographic divide.

The collection Toyern (“Gates,” 1997) brings together the landscapes of memory and reality, Bessarabia and Israel. The historical novel Ven Der Goylem hot Farmakht di Oygn (“When Golem Closed His Eyes,” 2004; English translation: “Stones Don’t Bear Witness,” 2011) based on a collection of historical documents that Sandler discovered in Kishinev, closely examines the anatomy of anti-Semitic violence in czarist Russia. Its central event is a little-known blood libel episode in the small Bessarabian town of Dubossar, which preceded and partly provoked the Kishinev pogrom of 1903. Unlike most of the “pogrom” literature, the novel focuses not on the Jewish victims but on the perpetrators, the Russian nationalist instigators and local perpetrators. Staying close to the factual side of the events, Sandler performs a subtle psychological autopsy of the narrowly aggressive mindset.

The novel is a bold stylistic experiment whereby idiomatic Yiddish is spoken not by likable Jewish characters but by their bigoted counterparts. Sandler’s every book is a foray into a new genre and theme, as well as a stylistic innovation. The novella Royte Shikhelekh far Reytshel (“Red Shoes for Rachel,” 2008) is a tender love story about two lonely Jewish souls, an American-born woman and a Soviet immigrant man, who meet on Brooklyn’s boardwalk, whereas Keinemsdorf (“No One’s Village,” 2012) is a fantasy tale about a secluded religious community in the middle of America, a crossover between the Amish and the Hasidim.

Sandler’s playful and clever collection of poetry, In Klangenets fun Netsekh (“In the Sound Net of Eternity,” 2010), combines aphoristic wisdom with nearly childish naiveté, and Lamed-vovnikes fun Mayn Dor (“The Secret Saints of My Generation, 2010”), written in the aftermath of 9/11, is a contemporary novel based on the author’s experience as the editor of the Forverts in New York City. Like many American Yiddish novels, it explores the afterlife of the old country in the landscapes of the American metropolis.

Sandler moved to New York in 1998 and soon took over the editorship of the Forverts. He came with a vision, and with energy and determination, the qualities that he developed in the Soviet Union and honed in Israel. He revitalized the Yiddish paper, which some considered obsolete, by bringing in new creative forces and expanding the readership. He modernized both the form and the content, using new digital technology and formats.

Notwithstanding all the political upheavals and relocations that he has experienced in his life, there is a remarkable continuity in Sandler’s career. From his teacher, Yekhiel Shraybman, he inherited an unwavering faith in the future of Yiddish and a strong dedication to making it happen. And as one of many people who had the great fortune of being mentored by Boris Sandler in the art of Yiddish writing, I am forever grateful for this unique experience. Sandler’s fertile and powerful imagination grows from his close attachment to his Bessarabian YIddishland, which is alive in his soul and memory. He has no peers in contemporary literature, and this unique position perhaps makes it difficult for an outsider to appreciate the originality of his works. Sandler’s impressively diverse and rich oeuvre does not fit easily into the compartmentalized, genre-oriented American Jewish literature, which often operates within easily recognizable cliches. American Jewish culture possesses an extraordinary but largely forgotten treasury of Yiddish literature, and Boris Sandler is one of its precious gems. One can only hope that it’s a matter of time before he is discovered and appreciated by the English-speaking readership.

Mikhail Krutikov is Professor of Slavic and Judaic Studies at the University of Michigan and a columnist at the Yiddish Forward.