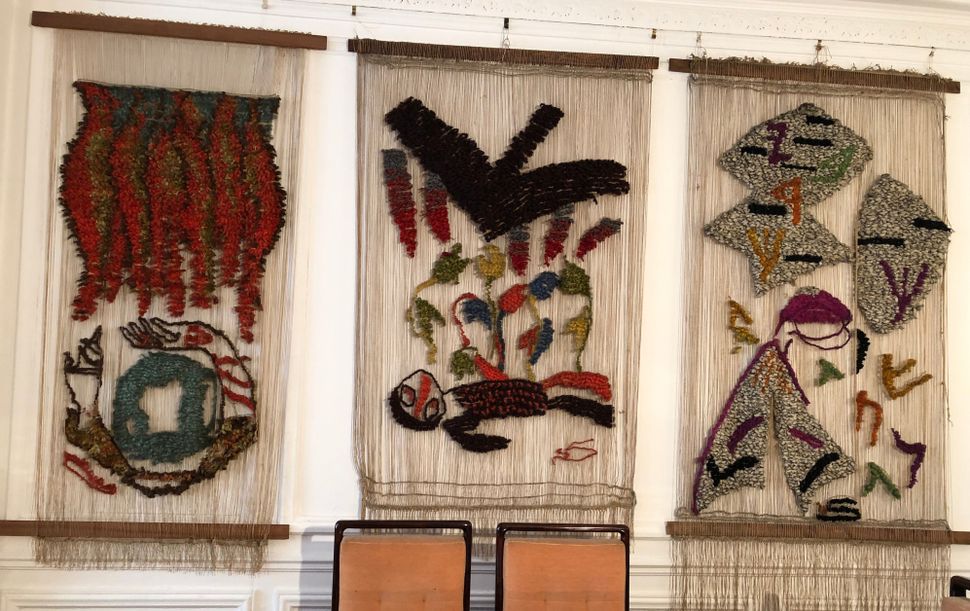 Ted Comet is an indefatigable leader and public figure who will serve as a grand marshal of the upcoming Celebrate Israel Parade, but he does one of his most important jobs in the privacy of his own Upper West Side apartment.

That’s where he gives tours to school groups, rabbinic students, psychoanalysts and historians of five larger-than-life Holocaust tapestries woven by his late wife Shoshana, a refugee whose family barely escaped the Nazis as they fled from Belgium to Portugal. They depict her experiences and the horrors she and others suffered during those years, something she kept hidden inside until she found art as an outlet to tell her story.

At the age of 40, out of the blue, she bought a loom and began weaving. “I was stunned by what she created,” he says. “I expected pillows for the sofa.”

That was many decades ago. A Cleveland native, Comet turned 95 this week. On June 2 he’ll march up Fifth Avenue in the parade, which he helped to found more than half a century ago.

Comet has not only been a witness to the major Jewish history events of the modern era, but he’s played a significant role in responding to the challenges facing Israel and world Jewry.

One of his most cherished duties, these days, is to stand in his sun-filled living room several times a month, in front of the six-foot tapestries, and describe how the red, green, orange, yellow, and black threads transformed his wife’s “trauma into creative energy and action.”

It’s a moving experience to hear Comet describe the meaning behind the largely abstract tapestries. He weaves his own tale of his beloved wife of 60 years; a survivor, accomplished artist, and psychotherapist who once spoke eight languages, but later lost her memory, voice, and light to Alzheimer’s, and passed away in 2012.

When he asked her why she chose to weave and not paint, she explained: “Paint, which derives from chemicals, is inert, and a painting, when completed, is fixed in time; whereas with wool, which comes from a living animal, there continues to be movement and change, as with life itself.’”

The two of them named the tapestries: The Beginning, An Ideal World, Dialogue with God, War, and Affirmation of Life.

“War,” one of the least abstract, hangs in the middle of a triptych over Comet’s rectangular dining room table. In it, a plane drops bombs on a field, while a dead child lies on the ground surrounded by flowers, “whose heads are bending in sorrow.” The child has a broken right arm, yet a bloom grows from his left wrist.

Only after she took the work off the loom, did Shoshana realize that she had in fact replicated an experience she lived through during the Holocaust, he explains.

A teenage Shoshana, her parents and four young sisters fled Antwerp the day the Germans entered the city and made their way through Belgium and France one step ahead of the German army.

Despite several close calls — including escaping a roundup by collaborating French police — the family managed to get on a train that took them across Spain to Portugal. After a year of frustrating attempts, they finally connected with a sympathetic American consul in Porto and came to the U.S. on one of the last boats before America entered the war. 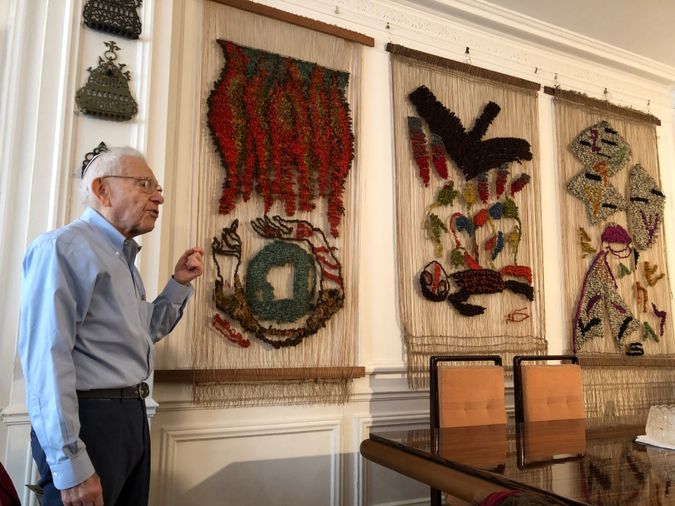 As depicted in her tapestry, during one frightening episode in their escape, Shoshana and her father jumped from a train that was being bombed by German planes. They landed in a field while machine gun bullets rained down on them. Facing certain death, “Her father told her, ‘The flowers will be our tombstones. Let us say the Shema.’” Somehow, they survived unharmed.

“Once she remembered that experience, she got hysterical. Then, her right arm became paralyzed,” Comet recalls. “We went to many doctors, but they all said nothing was wrong with her arm. It was psychological.”

Shoshana went into psychoanalysis and learned that through her weaving, she was resurfacing memories that were so painful, she had subconsciously self-paralyzed her own arm so she couldn’t continue.

She eventually worked out her repressed emotions through therapy, regained the use of her arm, and finished her final tapestry.

Upon completion of “Affirmation of Life,” she shut her loom and never wove again. Instead, she trained to become a psychotherapist, working with Holocaust survivors and their families who dealt with many of the same issues she herself had to explore.

Comet now believes he has a “mission” to share the work that “was her savior.” He hopes his visitors feel uplifted by the tapestries. “Life is a challenge. It is not smooth. It can be difficult. But the focus here is on resilience.”

He tells them: “Each one of you may have faced trauma, but the question is, what do you do with it? [If Shoshana] had the capacity to transmute her trauma into art, then she’s a role model. Each of you has the capacity to not let trauma get the better of you, but to create something from it.” Bottom line, he says, “I want them to leave feeling self-empowered.”

Comet first became involved in Jewish affairs at the end of World War II as a student volunteer in a program to rehabilitate war orphans in France. A young Elie Wiesel was one of those orphans, and became a close, lifelong friend.

For more than seven decades, he has been a leader at numerous Jewish organizations, including the Council of Jewish Federations, World Council of Jewish Communal Service, American Zionist Youth Foundation, and American Jewish Joint Distribution Committee, of which he is currently Honorary Associate Executive Vice-President. As director of the American Zionist Youth Foundation in the ‘60s, Comet wanted to plan a demonstration of American Jewish support for Israel, but had trouble getting the backing of the establishment.

The first year, the parade was only five blocks long. But things changed in 1967. At the time, it seemed certain that Arab forces were about to attack Israel. As a demonstration of solidarity with Israel, a quarter-million people showed up for a march up Riverside Drive. And the Six-Day War started days later.

Now, 55 years later, he says, “Even though there are mixed feelings about the direction the Israeli government is taking, we still support the concept of a Jewish state.” He is proud of his legacy. “It’s so nice to see something you gave birth to, grow up and mature into something so meaningful.”

As he turns 95, and prepares for the almost one-mile route up Fifth Avenue once again, he will be joined by most of his family — two children, 6 grandchildren, and 11 great-grandchildren.

Comet reflects on his life thus far, and his secret to the fountain of youth: “Never think of yourself as a finished product, but always a work in progress,” he says. “If you do that then you will retain the sense of awe and wonder that are the underpinnings of youthfulness.”