In ‘The Reports On Sarah And Saleem,’ An Affair Enters Dangerous Territory 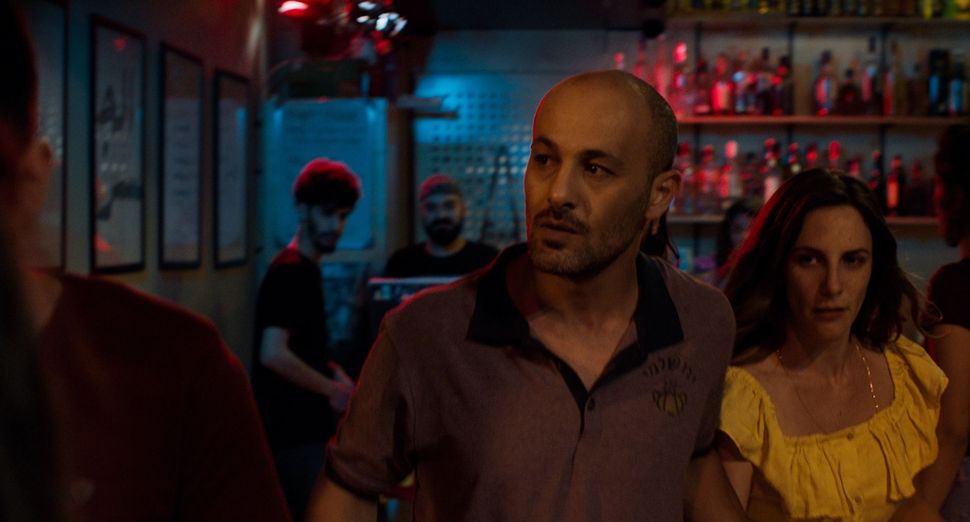 Adeeb Safadi as Saleem and Sivane Kretchner as Sarah in ‘The Reports on Sarah and Saleem.’ Image by Courtesy of Required Viewing

Saleem and Sarah have a routine. In the mornings, he delivers pastries from the bakery that employs him to Sarah’s cafe. In the evenings, she drives to him in an empty parking lot and they have sex in his van. But this simple arrangement is not so simple. Both are married (Sarah has a toddler; Saleem a pregnant wife), and Sarah is a Jew from West Jerusalem while Saleem is a Palestinian from East Jerusalem.

Palestinian director Muayad Alayan’s 2018 film, “The Reports on Sarah and Saleem,” which began a two-week run at New York’s Film Forum June 12, plumbs the complications of the ongoing Israeli occupation through an intricate tale of infidelity. The unfaithful parties break not only with marriage vows, but rigid social convention, each paying a different price in the process. When the two are spotted in public, an effort at a cover up jeopardizes both marriages and Saleem’s freedom.

The reasons for Saleem (Adeeb Safadi) and Sarah’s (Sivane Kretchner) trysts appear to lie in the superficial, and, quite possibly, in the taboo. Sarah’s husband, David (Ishai Golan), is a soft-spoken Colonel in the Army handling counterterrorism and Saleem’s wife, Bisan (Maisa Abd Elhadi), is in the late stages of her pregnancy and a student at a local university. While not exactly troubled, the marriages seem at a point of stasis. But Sarah and Saleem’s connection is not a deep or confiding one. In fact, Sarah seems committed to not “making this more than it is.” When she tells Saleem this, he answers “Life is not that complicated.”

Things do get complicated, though, over the course of an evening, when Sarah accompanies her lover past the West Bank Barrier and into Bethlehem, where he is making extra money illegally delivering goods from the east side of the city to people without the proper permits on the other end. After some resistance from Sarah (and instructions to speak in English lest she be identified as a Jewish Israeli), the two go to a bar where a young man (Riyad Sliman) spots Sarah’s necklace: her name in Hebrew. Saleem fights him and, the following day, is abducted on the West Bank and interrogated by Palestinian intelligence who, based on the man from the bar’s statements, believe him to be frequenting bars around Bethlehem with an Israeli prostitute — an offense that could disrupt his life if revealed to his wife and, it’s implied, might come with an additional penalty from the Palestinian powers that be.

With the help of his well-connected brother-in-law (Mohammad Eid) and an influential security officer named Abu Ibrahim (Kamel El Basha), Saleem pretends he was recruiting Sarah to spy for the Palestinians, and submits this false account in the form of written reports. Later, David discovers the reports in a raid of Abu Ibrahim’s base and Saleem is arrested.

In less-assured hands this material and its reliance on coincidence could seem overly melodramatic, but the script, by Alayan’s brother Rami Alayan, and the intimate and understated direction make it anything but.

Alayan’s camera is untethered, floating around the actors and locales, the long stretches of the West Bank Wall and the battlements of the Old City a constant backdrop. Many scenes are performed without dialogue, dense with room noise, the idling of cars, the mechanical churn of turn lights being activated. The film is, in many ways, about transit, as Saleem’s deliveries force him to shuttle between the divided worlds of the prosperous East and the slums of the West; all the while he switches between Arabic and Hebrew.

In the end, Saleem gets stuck in the middle, held in Israeli custody and suspected of aiding terrorists through his courier service and his “recruiting” of Sarah. It’s only when Bisan and Sarah bridge the distance of the wall and meet each other on their respective turfs that a resolution seems possible.

The triumph of Alayan’s film lies in its recognition of facts too often overlooked or fumbled in maudlin presentation. Israelis and Palestinians in the Holy City interact in all manner of mundane and fraught ways, even collaborating on the basic and time-honored project of impersonal extramarital affairs. But status for those on opposite sides of the Green Line is a current that runs through each interaction — so much so that, in the case of Saleem, the lesser crime of human attachment appears worse to those around him than an actual criminal act.

Saleem was naive to say life is not complicated. But his defenders, be they Bisan or Sarah, both of whom maintain his innocence by saying he is “not political,” are also mistaken. Due to forces beyond his control — the IDF, the occupation, the corrupt players in the West Bank — Saleem’s existence, on its most private level is politicized.

If “The Reports on Sarah and Saleem” never feels overambitious in its blend of political thrills and family drama, it’s because it reflects the reality on the ground, where people’s little lives can, in an instant, be upended by violence and intrigue. The personal is political.

In ‘The Reports On Sarah And Saleem,’ An Affair Enters Dangerous Territory