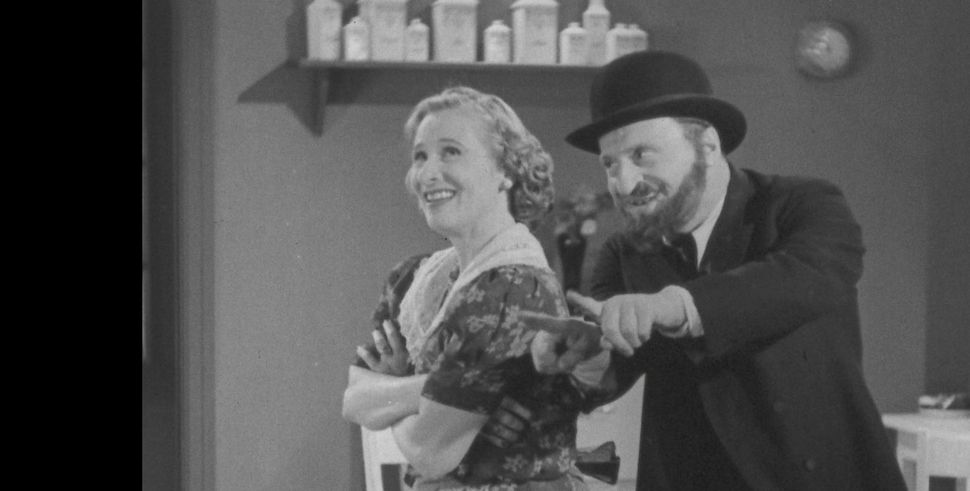 Jacob Zanger and Yetta Zwerling in “Her Second Mother” (1940). Image by Courtesy of Film Forum/Kino Lorber

New York’s Film Forum set itself a real challenge in naming its series on Yiddish Cinema something as definitive as “The Jewish Soul.”

Who could agree on what that soul looks like — and how could any lineup do justice to its ancient nature? While not comprehensive, the six films, presented by Kino Lorber from May 26 through July 3 in new restorations by Lobster Films and with new subtitles by Yiddishist and actor Allen Lewis Rickman, broach many of the concerns of mid-century Jews and Jews today.

Intermarriage? It’s covered in 1939’s “Tevya” directed by, written by and starring Yiddish Art Theater founder Maurice Schwartz in the title role. The film, the first non-English movie preserved by the National Film Registry, focuses on Sholem Aleichem’s dairyman’s daughter Chava, who marries outside the faith. This version of the story — whose production overlapped with Hitler’s invasion of Poland — is less ambiguous than Sholem Aleichem’s, having Chava return to her family and faith and renounce her Christian husband in no uncertain terms. It’s sure to stir that old conversation about Jewish continuity.

Familial duty also gets it due in Joseph Siden’s 1940 Second Avenue-style entertainment, “Her Second Mother,” about a young woman (Esta Salzman) who confesses to a crime she didn’t commit to save her adoptive family from disgrace. It gets a happy ending and some laughs courtesy of the feuding, catchphrase-loving Kupperman clan (Jacob Zanger and Yetta Zwerling) who sing tunes by “Bay Mir Bistu Sheyn” composer Sholom Seconda.

Also in the mode of musical comedy is Edgar G. Ulmer’s 1940 film “American Matchmaker,” which addresses the perennial question: “When will you settle down with a nice Jewish girl?” Nat Silver (Leo Fuchs), giving up on love, decides to try his hand at the shadchen business and ends up finding his match along the way in the form of a free-spirited client.

Max Nosseck’s 1940 film “Overture to Glory” is a darker riff on “The Jazz Singer.” A young cantor from Vilna (Moyshe Oysher) leaves his wife and young child for the secular world of the Warsaw opera, meeting fame and fortune at a great personal cost. Filmed in the thick of World War II, the film’s extensive cantorial segments read as an elegy for a disappearing world.

Taking its cue from German Expressionism, Michal Waszynski’s “The Dybbuk” from 1937 adapts S. Ansky’s popular play about a young woman (Lilli Liliana) possessed by the spirit of her dead lover. With ghoulish sequences, including a danse macabre, the film established Waszynski as a capable heir to his old mentor, F.W. Murnau.

Perhaps the most interesting film on the program is also the shortest, Aleksander Ford’s early work “Mir Kumen On (Children Must Laugh)” from 1936. With a cast of children who would grow up to be Bundists — many taking part in the Warsaw Ghetto uprising — the film shows daily life at an idyllic tuberculosis sanatorium for the children of Jewish workers. With sequences that owe a debt to the Soviet School of Montage, the hour-long feature was banned in its native Poland as communist propaganda. It’s an 83-year-old picture that presents that most timely of talking points: Socialized medicine.

Best viewed with relatives of different generations, Film Forum’s series is sure to provoke spirited debate, an essential form of nourishment for the Jewish soul.

A previous version of this article shortened Sholem Aleichem’s name to “Aleichem.” As a two word pseudonym, Sholem Aleichem is the correct attribution.