The Secret Jewish History Of ‘The Wizard Of Oz’ 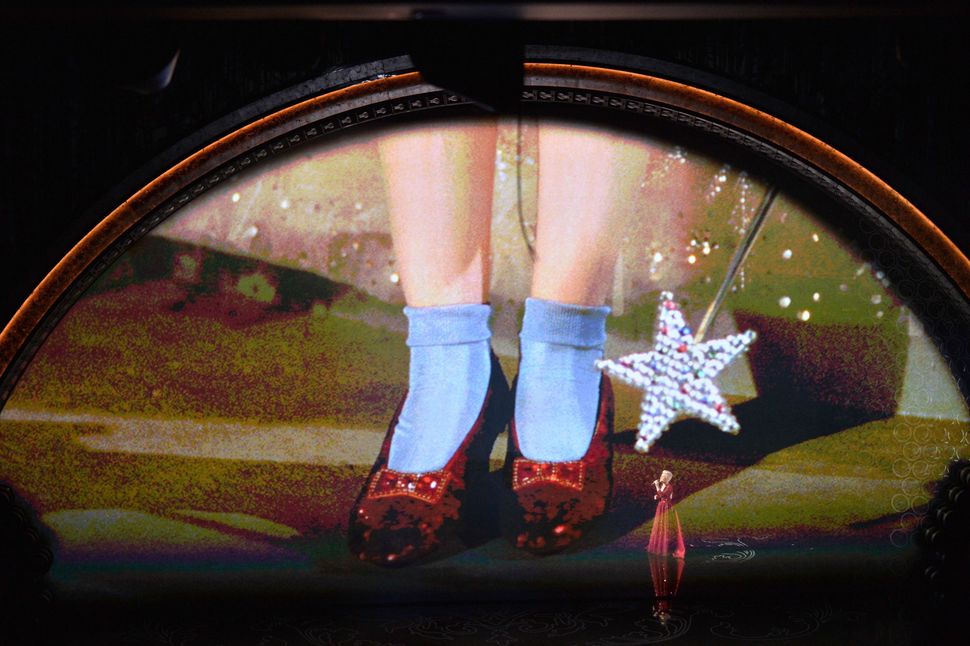 On its 80th anniversary, “The Wizard of Oz” (1939) remains one of the most influential musical films ever made in Hollywood, in part because of its Jewish inspiration. The film’s wide audience has always included Jewish spectators. The historian Adele Reinhartz has recalled the “religious” devotion with which her Canadian Jewish family binge-watched WoO, followed by Cecil B. de Mille’s “The Ten Commandments.”

The music of “Oz” doubtless plays a key role in this intense ongoing attraction. Songwriter Harold Arlen (born Hyman Arluck) the melancholy son of a cantor from Buffalo, New York, created plaintive ballads and sprightly earworms that creep into the consciousness and never depart.

This effectiveness is also due to the feisty lyricist, E. Y. Harburg (born Isidore Hochberg), a leftist political activist who grew up in a family where the Yiddish Forverts was read aloud nightly. Arlen’s biographers Walter Rimler and Edward Jablonski explain that the songwriter was profoundly influenced by the blues. The plaintive, heart-wrenching anthem “Over the Rainbow,” is so affecting that originally a brief reprise was planned to be sung by Judy Garland when Dorothy is trapped in the Witch’s castle, but this was deleted because it was deemed to be too upsetting for moviegoers.

Garland, woeful even in youth, manages to convey the innate message of veh is mir despite the overt optimism that somewhere dreams… really do come true.” In 1943, the pop singer Cliff Edwards was truer to the implicit message when he recorded “Over The Rainbow” with the lyric changed to state that dreams “never do come true.” This befitted a film in which, as Garland’s Jewish husband Sidney Luft later implied, nightmarish flying monkeys traumatized the dreams of generations of children. Luft and Garland’s own kids Joey and Lorna first saw “Oz” during one of their mother’s hospitalizations and were terrified by the witch and convinced that she had harmed Garland.

Other Arlen-Harburg tunes, especially those sung by the Munchkins, are hauntingly catchy. Tony Soprano’s therapist Jennifer Melfi confides as much to her shrink in episode 16 of “The Sopranos.” In a nightmare, Dr. Melfi hears a high-pitched song by the Munchkins, “You’re out of the woods…” Canadian cultural historian Maurice Yacowar posits that according to Freudian symbolism, the song refers in “The Sopranos” to Melfi’s liberation from danger by Tony’s supposed death.

Another tragic interpretation of Arlen and Harburg’s Munchkiniana emerged from the Chicago author S. L. Wisenberg. Struck by the little people in “Oz” presenting themselves as the Lullaby League, Wisenberg offered a rewritten version of the same lyric as introducing the Holocaust Girls epitomizing her struggle with the legacy of modern Jewish history.

In addition to ultra-communicative music, casting was part of the “Oz” aura. Film historian Aljean Harmetz established that the first choice for the title role was the Jewish vaudevillian Ed Wynn (born Isaiah Edwin Leopold).

Decades later, Wynn would star as the dentist Albert Dussel in “The Diary of Anne Frank” but in 1939, he was a giddy radio comedian; Wynn might have brightened the bland, sentimental tone created by Frank Morgan. But Wynn’s biographer Garry Berman notes that he turned down what he saw as a minor role.

Wynn might also have sensed that another Jewish vaudevillian, Bert Lahr (born Irving Lahrheim) would run away with the film as the Cowardly Lion. Lahr’s films before and after “Oz” show how closely his shtick are duplicated by Arlen and Harburg, from Lahr’s famous mock-operatic singing to other routines made popular on Broadway before reappearing in “If I Were King of the Forest.”

Tailoring the material to Lahr’s performing strengths was the role of a crowd of mostly Jewish scriptwriters who worked on the film. They ranged from Herman Mankiewicz, co-author of “Citizen Kane” to Irving Brecher, who wrote the Marx Brothers’ “At the Circus” (1939) and “Go West” (1940). There were also Herbert Fields, son of the great comedian Lew Fields (born Moses Schoenfeld), Samuel Hoffenstein, who wrote Otto Preminger’s “Laura” (1944), and others. Their contributions were reportedly corralled together by Harburg as unofficial script editor.

An ardent anti-Fascist, Harburg would have been acutely aware that the film’s wistful “no place like home” theme was especially acute in an era of Jewish exiles, whose homes often no longer existed. Liora Giubkin, an expert in philosophy and religion, observes that the TV movie “The Devil’s Arithmetic” (1999) explicitly relates Dorothy and Oz to the Holocaust in terms of a time-traveling young girl’s acceptance of her family’s experience, underlining the importance of Jewish home life and ritual. The theme is still vital, as a new Oz-and Jewish refugee-themed novel by Luiza Sauma, of Brazilian Jewish origin, suggests.

The audience in 1939 likely sensed this too. The following year, the Chicago Jewish author Ben Aronin contributed a script for “The Purim Wizard of Oz” to “The Advocate: America’s Jewish Journal.” Even today, “Oz” inspires Purimspils around America, as if the film’s terrifying elements had parallels with the tale of Haman from the Book of Esther and more recent traumas.

In 1939, Jewish retailers responded to the film’s popularity in their communities in less emotionally fraught ways as well. In the Jewish area around North Broad Street, Philadelphia, shop owners Nate and Lenore Shore went Oz-themed, with a banner inviting shoppers to The Wonderful World of Lighting and a replica of the bridge danced over by Dorothy and Toto in Munchkinland.

Such echoes suggest that Jewish screenwriters did manage to touch the hearts of landsmen among moviegoers. Yet Yiddishkeit in directorial input for “Oz” was limited to a few days of supervision by George Cukor, of Hungarian Jewish roots. Cukor’s fleeting conceptual input radically altered the film, as “Oz”mavens Jay Scarfone and William Stillman have detailed. Not least, Cukor banished the last remnants of Shirley Temple’s ghost from the film — MGM studio boss Louis B. Mayer initially wanted Shirley Temple to star — ordering Garland’s hair to be dyed from an artificial blonde to a more plausible auburn, among other subtleties.

Whatever the impact of these refinements, “Oz” retains allusive force eight decades on. Jewish subtexts are still regularly detected, as when Rabbi Shmuly Yanklowitz’s “Soul of Jewish Social Justice” compared the theme of the ruby slippers — Dorothy must click her heels to return home — to the ritual known as Halizah. To avoid a marriage otherwise required by tradition, a Beth Din supervises proceedings in which a childless Jewish widow makes a declaration, removes one of her brother-in-law’s shoes, and spits in his face. As Rabbi Yanklowitz puts it, whether in “Oz”or in Jewish observance, “shoes represent power, and to remove another’s shoe is to humble him.”

Dorothy’s celebrated shoes designed by Adrian (born Adrian Adolph Greenburg) may be powerful, but they contain not an iota of Yiddishkeit. Yet given its radiance at 80, nothing seems likely to ever dim the captivating allure of the “Wizard of Oz” for Jews and other viewers.

The Secret Jewish History Of ‘The Wizard Of Oz’