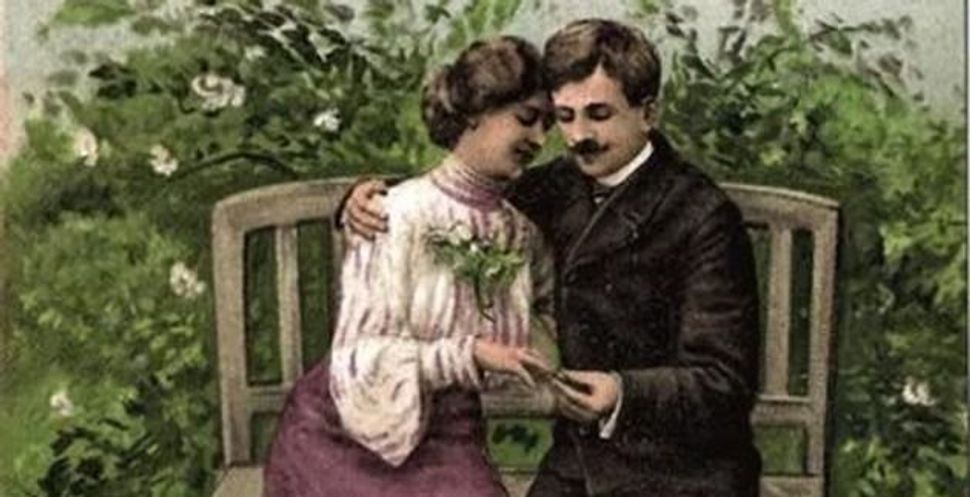 Baltimore’s Moses Montefiore Congregation was the site of a most unusual wedding on October 12, 1902. The festivities began in ordinary fashion as guests gathered to attend the nuptials of Marie Roypen and Samuel Oren, two young Jewish immigrants. However, the wedding quickly took a shocking turn. As Marie and Samuel walked down the aisle toward the chuppah, one Joseph Goldberg stepped forward and placed a ring on Marie’s finger while reciting the traditional formula for Jewish marriage. The proceedings came to a screeching halt as everyone tried to figure out what had happened. Did Marie even know Joseph Goldberg? Was she now Jewishly married to him? Upon Marie’s parents’ insistence, the rabbi was convinced to go ahead with Marie and Samuel’s wedding, and promised to consult with fellow rabbis to determine that Joseph Goldberg’s actions were irrelevant under Jewish law.

The Roypen-Oren-Goldberg saga was far from over though. The following day, Marie disappeared with Joseph Goldberg. It turned out that the match between Marie and Samuel had been arranged by their parents, and Marie, in love with Joseph, cooked up this unorthodox plan to escape her fate. Ultimately, Samuel divorced Marie in late 1903. The Jewish legal tangle was resolved by a group of sixteen rabbis who, after much deliberation, decided that Marie should be Jewishly divorced from both men. While Samuel likely gave Marie a gett, a writ of Jewish divorce, Joseph did not heed the rabbis’ instructions. He and Marie settled in Chicago where they married civilly in 1904.

Certainly, this story was scandalous, and it received an inordinate amount of attention. Newspapers across America published dozens of articles about it. And, in a fascinating twist, Henry Adler, the son of one of the sixteen rabbis who issued the Jewish legal opinion on the case, penned a musical about it, which he planned to have performed in Yiddish and German in Philadelphia and Baltimore. Adler said that he hoped to book a theater, and if not, rent a hall, “but give the performance he will.” The story of Marie Roypen and her two husbands became larger than life.

Why did this story about a young immigrant woman, her jilted husband, and her secret lover attain such mythic status in early twentieth century America? While surely some of the notoriety came from the dramatic tactics Marie and Joseph chose, this does not fully explain the continued focus on the story for over a year. The fascination with the Roypen-Oren-Goldberg saga stemmed from the fact that it homed in on a central theme of turn-of-the-century Jewish immigrant marriage stories – the triumph of American love in its battle with Old-World marriage – and it did so in a most sensational fashion.

America had long been a place where young people chose their own spouses and married for love. Beginning in the Revolutionary era, American thinkers consistently linked spousal choice to the political project of democracy, arguing that democratic government was like a companionate marriage because the people freely choose their government out of true affection. In this equation, arranged marriage was equivalent to an autocratic, despotic government, something utterly un-American, to be avoided at all costs. Thus, early on, choosing one’s spouse became central to proving one’s American identity.

At the turn of the twentieth century, as millions of Eastern European Jewish immigrants flooded American shores, they quickly understood the importance of marriage for love in American society. They realized that arranged marriage, still fairly common among Jews in Europe, would show them to be un-American. As one pundit noted, such behavior “seems very strange in this land of freedom and Sunday evening courting.” Immigrants’ adoption of American marriage practices was key to proving themselves worthy of inclusion in American society.

It is no surprise, then, that young Eastern European immigrants so publicly trumpeted their partiality for love matches. Jewish immigrant Anzia Yezierska’s semi-autobiographical 1925 novel, Bread Givers told the story of heroine Sara Smolinsky’s refusal to submit to her fiercely traditional father’s control over her life. Although her father arranged the marriages of Sara’s three older sisters, Sara insists that he cannot do the same with her. “Thank God I’m not living in olden times. Thank God I’m living in America!” she yells, “You made the lives of the other children! I’m going to make my own life!”

Tales of intergenerational strife over marital choice during the Eastern European migration became stand-ins for larger tales about Americanization. Old World parents and matchmakers were easy targets in stories about affinity for America, the land in which love and freedom won the day. Young Jewish immigrants understood the power of marriage to define them as American, and they made sure to win a place in their new country by publicly fighting to marry for love.