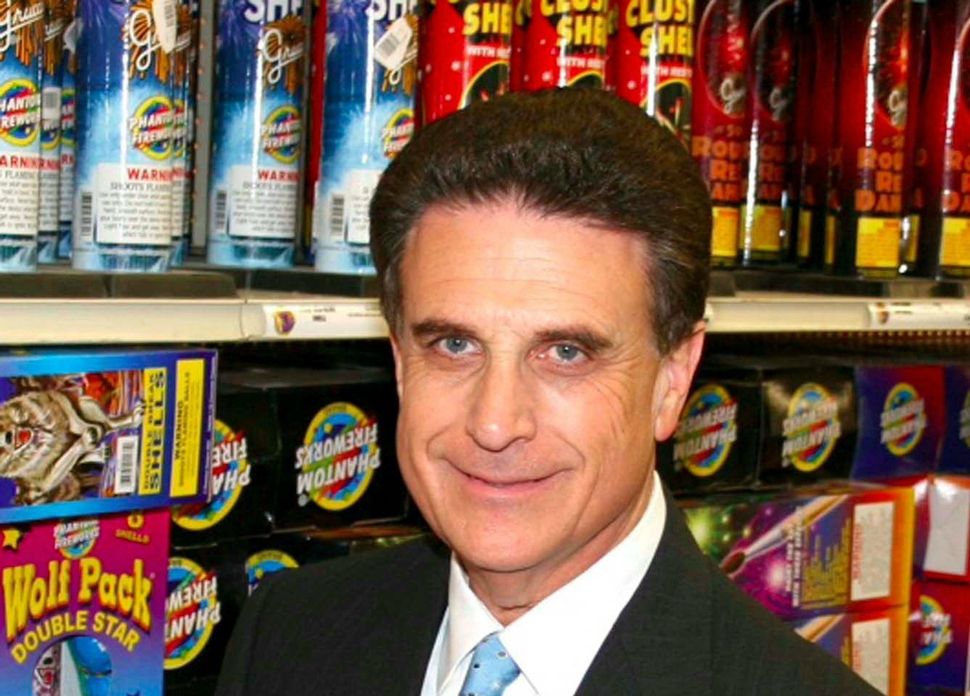 The fireworks industry in America is dominated almost entirely by big-name, old-time Italian families whose grandfathers and great-grandfathers mastered the craft in Italy and brought that knowledge to the United States. There are the Zambellis of New Castle, Pennsylvania; the Rozzis of Cincinnati, and the Cartolanos of Chicago. The Grucci family, based in New York and operating since 1850, is perhaps best known for its firework shows at the Olympics and at a number of presidential inaugurations.

Then there is Bruce Zoldan.

In the 1960s, Zoldan was just a 15-year-old Jewish kid trying to make a couple of bucks selling fireworks from the trunk of his mom’s tan Chevy Impala. His dad was a salesman at the time, always traveling around a 100-mile radius from where the family lived in dreary Youngstown, Ohio. One day, just before the Fourth of July, he returned home from a stint on the road with some fireworks for his son purchased across the border in Pennsylvania for about $100.

Fireworks were outlawed in Ohio at the time. But Zoldan sold them to some of his friends for $200. And so began his makeshift fireworks business, which would eventually grow into B.J. Alan Co. also called Phantom Fireworks, one of the largest, most lucrative fireworks retailers in the country.

“Year after year the sales went higher and higher, and I saw the numbers as astronomical compared to the business that my dad and my uncle were doing,” said Zoldan, now 66. His elders supplied grocery stores and drug stores with nonfood items, like school and pet supplies. “It wasn’t more than five years that I was doing fireworks that I was doing almost 25% of what they were doing in one month, and by the mid-70s, sales skyrocketed — pun intended — and it was off to the races.”

Zoldan hit the headlines for all the wrong reasons in 2013 when it was revealed that Boston Marathon bombers Tamerlane and Dzokhar Tsarnaev once bought fireworks from his company. Dzokhar Tsarnaev was sentenced to death last week for his role in the terror attack.

But that was all in the future and a half century ago. The young Zoldan was making a few hundred thousand dollars a year, and he used his fireworks money to pay his own way through Youngstown State University and to help his sister buy a car. In 1974 he indulged himself a little, too, purchasing his first, brand-new, fresh-out-the-showroom Corvette — shiny white with a rich black interior.

Fireworks haven’t always been such a hot business. When Zoldan first started out five decades ago, only 12 states actually allowed residents to use sparklers or any other kind of consumer fireworks. His family wasn’t keen on getting involved — they worried too much about crossing borders and the legality of it all — so the teen started out as a one-man band.

Roughly 50 years later, 47 states allow some type of consumer fireworks to be used.

“The success is attributed to having good people working with you, expanding little by little, and lobbying in many states to get the states to allow the citizens to use them,” Zoldan said. “It was a few companies that worked hard independently or together in opening up the states, and those few companies are the leaders in the firework business today.”

Lifting these bans hasn’t been the only obstacle; Youngstown, historically, hasn’t been the easiest place to live or work in. “Youngstown is not as booming a city as it used to be, by far not, and the Jewish population here is very small in comparison to what it was,” said Zoldan’s wife, Rori Zoldan, a daughter of Holocaust survivors whom he met 35 years ago in Tel Aviv. She was a psychologist in Israel, working with mentally ill children, but she joined her husband’s business once she moved to the United States. Today, she oversees retail and customer service for the company.

“When I came here our temple was full on the High Holidays, but now when you come here it’s half-empty,” she said. “A lot of Jews have left town. There are roughly 3,500 Jews still here, including the Western part of Pennsylvania, so it’s very small.”

“Youngstown was a steel town in my young days,” Zoldan added. “Steel mills were very active, and most of the businesses in my community revolved around the steel industry.” But once steel production was outsourced overseas in China, Youngstown’s steel industry and its factories were forced to shut down, transforming the once-bustling place into a grim, depressed city with high unemployment and blight.

“People were looking to either move out of town or for a small, little business to open up,” Zoldan said. “Not every community would be supportive of fireworks, just by the unknown nature of the business or people thinking it’s dangerous, but Youngstown welcomed the business more and more, because we were providing jobs in the community and bringing in national dollars. I was in the right city at the right time.”

B.J. Alan Co. now employs roughly 400 people year round, with nearly 2,700 working there during high season in the weeks leading up to the Fourth of July. “On the Fourth we light up backyards from coast to coast, because every nationality and every religion in America wants to celebrate America’s birthday,” Zoldan said. The week between Christmas and New Year’s Day is the second busiest time of the year. 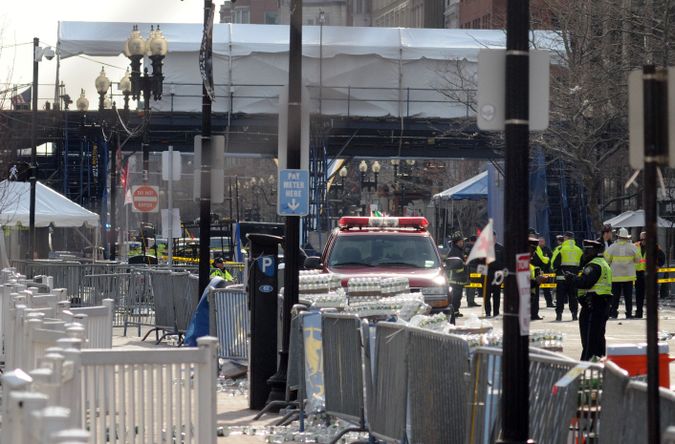 It’s pretty easy to purchase fireworks. So easy that in 2013, shortly before the Boston Marathon bombing, the Tsarnaev brothers bought some consumer fireworks from one of Zoldan’s Phantom Fireworks stores in New Hampshire. (“Class B” public display fireworks are used in big shows such as the Macy’s Independence Day celebration, while “Class C” consumer fireworks, available to everyday Americans for backyard picnics and the like, are heavily regulated by the Bureau of Alcohol Tobacco and Firearms.)

The Tsarnaev brothers were allegedly guided by an Al-Qaeda handbook that said the way to make bombs in America was to buy consumer fireworks and dissect the devices.

“They took the pyrotechnic compound — the powder — out of hundreds of fireworks and were guided to add metal and buy a pressure cooker to create a bomb,” Zoldan said. “Unfortunately for the PR of our industry, it wasn’t good, but there are easier ways they could’ve done it.” In 1995, the Oklahoma City bomber used fertilizer, he noted.

Tamerlane Tsarnaev was killed during the massive manhunt that shut down the Boston area after the attack. Dzokhar Tsarnaev was convicted of carrying out the attacks and apologized for his role during a sentencing hearing this week, at which he was sentenced to death.

The Boston Marathon bombers were not the first terrorists to patronize Zoldan’s fireworks. In 2010, Faisal Shahzad, known as the Times Square bomber, purchased consumer fireworks at another one of Zoldan’s stores, with the intent of mass-detonating them to ignite other explosives hidden in his car.

“Shahzad didn’t realize that consumer fireworks don’t mass-detonate, so when he ignited them and they didn’t go up, we were able to trace back the items left over in the car to one of our stores,” Zoldan said. “We saw him pulling up in the parking lot, walking into the store and looking up at the cameras. We provided that to the FBI, and now he’s serving time.”

Zoldan’s company initially came under fire for selling fireworks to the Tsarnaev brothers, but it quickly became clear that camera footage from Zoldan’s store was paramount in helping authorities track down and verify the bombers’ identities. And the head of national security for B.J. Alan Co. is now Robert Kroner, a former FBI agent well known for cracking down on the Youngstown mafia.

Zoldan’s business suffered in New England in the wake of the marathon attack, he says. But sales are back up to speed two years later, and Phantom Fireworks continues to be a strong Jewish-owned, Jewish-managed family business with 75 stores across the country. The shops are stocked with fireworks manufactured in factories in Hunan, China, the largest fireworks production region in the world, and in the Jiangxi and Guangxi provinces.

The business is still family run. Besides Zoldan’s wife, top executives include Zoldan’s brother, Alan Zoldan, the Zoldans’ cousin Jerry Bostocky, and their colleague William Weimer as vice presidents. Zoldan’s sons, both recent graduates of Ohio State University, are also actively involved and are being groomed to join the business.

During the off-season, the Zoldan clan visits the factories in China to hone the product for the following year. “We’ll see people sitting on the floor of the factory, rolling the powder because it’s all handmade,” Rori Zoldan said. “We sit at night, they shoot fireworks and we tell them what we like about it, what we don’t like about it, and that’s how the items are created.”

“I usually have a nice drink and sit back to watch all the Phantom fireworks being shot from backyards all around the city,” Zoldan said of his 4th of July plans. “I’d love to tell you I’ll be drinking Manischewitz, but it’ll probably be Macallan Scotch.”

This article was originally published in the Forward on July 2, 2015.