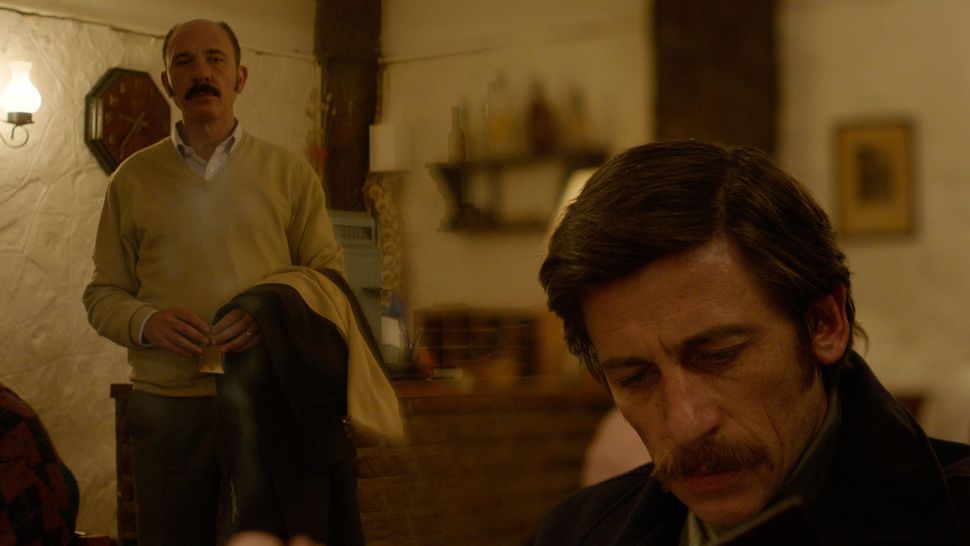 Dario Grandinetti and Diego Ciemonesi in ‘Rojo.’ Image by Rojo

Benjamín Naishtat’s “Rojo” begins with what seems like a wish-fulfillment fantasy of a very specific sort. Claudio (Argentine actor Dario Grandinetti, of such films as Almodóvar’s “Talk to Her”), a lawyer in a provincial Argentine town in the mid-1970s, is waiting for his wife at a nice, if modest, local restaurant. He’s approached by an aggressive, mustachioed younger man, who in short order demands his seat; somewhat surprisingly, the attorney obliges. At this point, though, the tables visibly turn. Claudio assumes a position behind the man and affixes him with a burning stare, the tension heightened by Naishtat’s use of a split diopter to keep both men unnaturally in focus. Finally, the man’s resolve breaks and he again confronts Claudio, who dissects his adversary’s character with legalistic precision and supreme middle-class composure. “I feel sorry for you, I really do, because I’m sure this kind of thing happens to you all the time,” he calmly, clearly intones. “Your life will always be a mess, a pile of awkward moments like this one.” His antagonist simmers in humiliation before breaking down in rage and being summarily ejected from the restaurant. Claudio reassumes his seat.

In the contemporary parlance, Claudio has “destroyed” the ill-tempered fellow — and perhaps to a greater degree than intended. The infuriated younger man attacks our protagonist on his way home, turning Claudio’s moment of triumph nightmarish. The man pulls a gun and the situation escalates to the point that Claudio drives him out into the desert to die. Among Argentina’s supply of talented Jewish filmmakers, Naishtat carries the conflict with impressive command, and opening scenes could stand on their own as an elegant concise short, so effectively do they establish the film’s attitude towards Argentina’s middle class and atmosphere of casual amorality.

But as “Rojo,” which is currently playing at the newly rechristened Film at Lincoln Center and the Quad, is not a short film, and it assumes a slightly different form as it expands. The masculine conflict of the introductory section gives way to a sort of mystery-in-reverse, the suspense coming not from the matter of the guilty party’s identity but from the question of if and when he’ll receive his comeuppance, as in the great ur-text of the detective novel, “Crime and Punishment.” This set-up, however, is complicated by the context of the film’s action. American viewers can be forgiven for not being able to keep track of all the repressive regimes their government has helped to prop up to their South — there’s a bunch — so here’s a quick refresher: In 1976, a military coup brought a right-wing military junta to power in Argentina, ushering in a period known as the dirty war, in which the government systematically hunted down and “disappeared” those suspected of opposing its authoritarian political system and neoliberal economic one. While the nature of the crime makes it impossible to determine the exact number of victims, estimates run up to around 30,000.

From here, the allegory in “Rojo” is hard to miss, and Naishtat has no interest in being coyly ambiguous about his attitudes regarding the subject at hand. According to the director, his grandmother, a union lawyer, was illegally jailed in 1975 before being exiled until 1984. The echoes are omnipresent and ominous, though they rarely distract from the film’s action. One character speaks discreetly of “bodies” in the desert; and in one of the film’s more directly allegorical moments, a magician’s trick of making a woman disappear goes briefly awry.

Despite the grim subject matter, “Rojo” maintains a wry, even playful sensibility. Known for more experimental fare, Naishtat is clearly having a great deal of fun working within the film’s thriller framework. The conceit allows him to go deep into the genre filmmaker’s bag of tricks, from the split diopter in the opening scene to various fades, zooms, and other more overt camera maneuvers that recur throughout the film. It’s on the whole a noticeably anachronistic style — Naishtat has cited as touchstones Francis Ford Coppola, Sidney Lumet, and other giants of the seventies New Hollywood — though these often referential techniques notably aren’t deployed in tribute to any particular group of movies. Rather, “Rojo” plays like an artifact from an alternate reality in which ‘70s Argentine cinema experienced something like the explosion of jaded, stylish cinema going on up north, a scenario of course rendered impossible by the nation’s political system — in an interview with Filmmaker Magazine, Naishtat identified the era’s most important filmmaker as radical documentarian Raymundo Gleyzer, who was disappeared by the regime in 1976.

The moral landscape of “Rojo” matches its sun-sick color palette. Naishtat paints the early days of the dictatorship as a world of pervasive corruption, which proceeds slowly but inexorably apace. A key episode involves Claudio getting drawn into a speculation plot involving a gutted house that once belonged to a dissident family. The upright, sensitive attorney sifts through what’s left of their home — including some photos that Naishtat took from among his own family heirlooms — before deciding to conspire with his friend to flip it for a big profit. Most horribly, even the kids may be prone to disappearing each other.

The film’s grotesquerie finds its apotheosis in the figure of the detective hired to get to the bottom of Claudio’s crime. The victim’s upper-class relatives (including Claudio’s partner in the shady real estate deal) contract a famous Chilean detective named Sinclair who plies his trade on television like a real-life Columbo, a character who, it should be said, was inspired by Porfiriy Petrovich, the wise inspector of Dostoevsky’s novel. Though, while Columbo and Porfiriy both serve as something of a moral center in their own ways, this import from Pinochet’s Santiago further underscores the absence of one in Naishtat’s film. Played by Chilean actor Alfredo Castro and looking something like a Latin American Al Pacino, Sinclair has the kind of mawkish, hypochondriac religiosity that can’t but tilt into hypocrisy, beseeching God to deliver him from “perversity” and stubbornly tormenting Claudio along the path to their inevitable confrontation.

Somewhat unexpectedly, Claudio ends the film in a wig. It’s an odd turn, but in line with the film’s offbeat approach to social critique. The community certainly notices that the bald lawyer is now sporting an unconvincing head of hair, but as in most things, they choose to keep their mouths shut. The same populace is shown at the beginning of the film ransacking the home of the repressed family, already finding ways to reconcile themselves to the new order — and, where possible, purpose it for personal gain. It’s a comprehensively withering portrait of Naishtat’s homeland that might scan as cynical were it not for the streak of astringent moralism, one that’s been prevalent of late. And for all the film’s resonances with current day events in Latin America and elsewhere, it’s this sense of rot-all-the-way-down that ultimately makes Naishtat’s nauseous seventies fever dream feel very much of the moment.