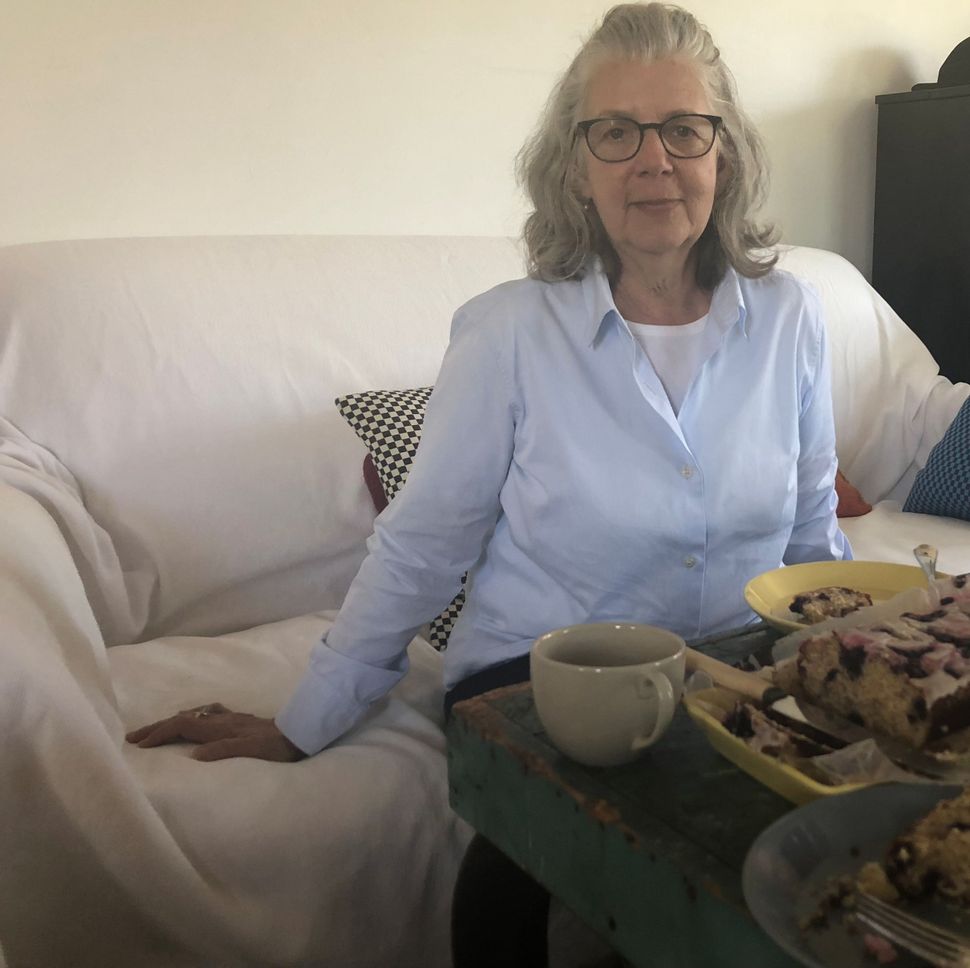 When I met Maira Kalman at her apartment a year ago, I was in some upheaval.

My boyfriend had ended our relationship. My apartment was becoming comically unlivable. (If you’ve never woken up to the sounds of a large rodent trapped in your ceiling, I don’t recommend it.) I’d spent months lying awake most nights until two or three in the morning.

Which is why it was tempting to bake a cake for Kalman, an artist and writer whom I’ve admired since I read her 2009 book “The Principles of Uncertainty,” an illustrated guide to her mind that originated as a column for The New York Times.

I was going to speak with Kalman about her book “Cake,” with recipes by Barbara Scott-Goodman. It was the nicest thing I’d read all year. Like a good cake, the book is light but substantial, sweet but not cloying. It’s a reflection on memory, loaded with hopefully earnest recipes. (“It’s a real treat to have a homemade coffee cake on hand for your family and friends, and anyone else who might drop in.”) In one spread, a white and red cloud of sugar sits on a pink table covered in cherry blossoms, set against a pale purple wall. “The Pavlova dazzled them all,” Kalman writes in the corner. “The air was pale pink and all cares melted away.” What pavlova? When? With whom? It didn’t matter. When I was finished with the book I didn’t want more, but I did think that at some point in the future, I might want it again. 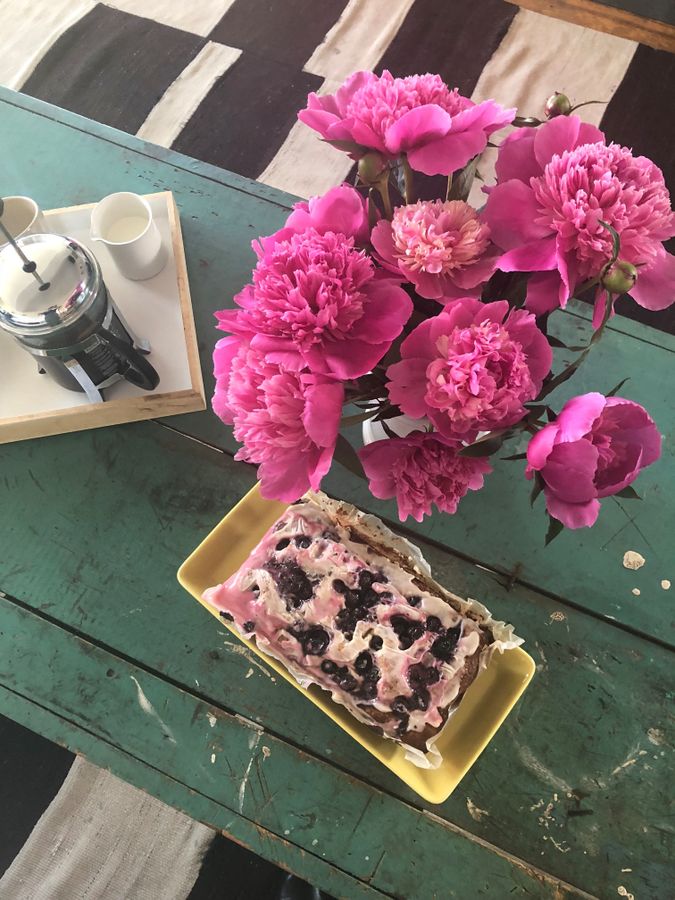 I baked Kalman the cake — Yotam Ottolenghi’s lemon, blueberry and almond loaf (delicious!) — because it only seemed fair to speak about cake over cake. Lemon cake is the first recipe in “Cake,” accompanied by a peaceful painting of a couple at a table: “Every Sunday they ate a lemon pound cake and made plans for the week.” I thought an homage would be appropriate, and it was a cake I’d long wanted to try but would, realistically, never make just for myself; it wanted a special occasion.

Kalman brewed coffee in a French press, and we spoke in her living room, across a turquoise-painted table topped with a vase of nearly-perfect peonies. Kalman’s way of speaking is both brisk and gentle. Her home, full of books and artwork yet sweetly uncluttered, is an artist’s home.

It was a peaceful morning. But when I left Kalman’s West Village apartment I found myself in what felt like a trap of sadness; it closed over my head and encased me entirely. On the train back to work, a midday crowd forced me into a corner of the car, where an older man penned me in and spent several minutes breathing directly onto my face, very intentionally and very hard. It’s hard to convey the extreme creepiness of the situation; everyone breathes on everyone on the subway. But there’s breathing, and there’s breathing. By the time we reached my stop, my body was so tight with anger and humiliation that I could hardly walk to my office.

All of which is to say that, while I’d had a genuinely lovely time with Kalman, between my sadness and subway harasser I found myself unable to revisit it. Kalman would have understood. One of the many cakes she writes of in “Cake” is “The Broken Heart Cake,” made by Kalman’s aunt Shoshana to soothe her in the wake of her first romantic rejection. In the accompanying image, Kalman draws her 16-year-old self as improbably small, her body curled in on itself in anguish. I don’t know what she would have prescribed for the adult miasma of unhappiness that loomed when I thought about our conversation, which meandered from the pleasures of babka to her thoughts on that first heartbreak, now several decades removed. But I’m sure she would have been firm that I ought to get over myself, yet compassionate enough that I’d have no choice but to admit she was right. 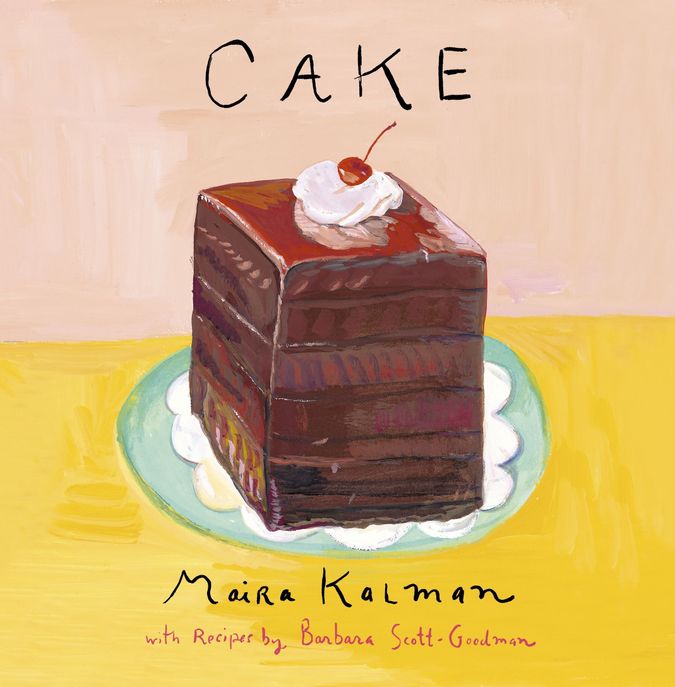 “Cake” by Maira Kalman and Barbara Scott-Goodman. Image by Courtesy of Penguin Press

What brought me back to my conversation with Kalman was my roommate, Tashween. We moved to a nicer (and so-far rodent-free) apartment in October, where Tashween has spent the past six months furiously baking pies. There was salted maple pie for my birthday, and coffee custard pie when her siblings visited, and grapefruit custard pie when my mother came to town, and plum and apple and tahini squash and honey and rhubarb pies just because. There have, as of last count, been 24 pies in all. It has been extremely good for my mental health, if less good for my teeth. Kalman spoke quite emphatically about the emotional benefit of homemade sweets, and as I ate a slice of coffee pie for a recent breakfast, I knew it was months past the point when I should have shared her thoughts on the matter.

“I am not sure we ever said thank you,” Kalman writes in “Cake,” recalling another cake made by her aunt Shoshana. “But isn’t that how it is.”

Talya Zax: How did the idea for the book come up?

Maira Kalman: Barbara and I have known each other for many years. We were at a party together and she said, “Let’s do a book together! What about cake?” And I thought: perfect. I decided that I wouldn’t write anything happy, because that would be too obvious. I would only write really sad stories connected to cake. And then when I looked at the compilation, it was so sad! So I started writing, just stories about memories of life, and that’s how the book started getting formed. The paintings, some of them are unconnected to stories and are just moments that I’ve seen, or from books, photographs of other people that just felt like the moment where you feel really good.

What are your favorite cakes?

Either lemon pound cake or honey cake, the honey cake being the family favorite. My grandmother, when she came to Israel, every Friday she made little jam buns and a yeast cake, it had kind of leaves in it, like a cinnamon babka, and then a cheese babka. Can I cut you a slice of your cake?

There were trays of [the buns], warm and fragrant and beautiful, and you’d eat as many as you possibly could. All the women did that. All the women were baking. That sense of the warmth, and the home, and preparing for a special day — that has never left. So Friday is our favorite day, everybody in the family. We always say Shabbat Shalom. It’s a beautiful time. I am quietly happy in myself on a Friday. This is delicious!

I try not to eat too many cakes, which is funny.

Tell me about the cakes in the book. Did you work with Barbara to decide which ones would go in?

The wonderful, serious research that it requires to decide on a list of cakes is really fantastic. We went back and forth trying to find the cakes that represent the most familial, easy, iconic cakes that you would need to know. Not anything extravagant or esoteric.

I was interested by the idea, in the book, that cakes are more about the memory and the emotion attached to them than the flavor itself. Why do you think cake is so evocative?

Because cake is very connected to very special moments in life. You celebrate with cake. It reflects moments of love, and sometimes moments of sorrow. Your connection to those moments is very intense.

What are some of your most memorable cakes, aside from the ones that are in the book?

The mocha cream cake that my parents bought at Mother’s Bakeshop in Riverdale, and how they would have that at their parties. I used to buy strawberry shortcake for my son from Jon Vie, which was a bakery that was here for nine years. Now that you ask me I think oh, wait a minute, I don’t remember anything.

Were you surprised by any of the memories that came up for you when you were looking through your cake history?

I was surprised at how vivid and powerful the memory of getting my heart broken [was]. I mention [Michael Goldenthal] in radio interviews. I’m surprised that he hasn’t gotten in touch.

Did you ever see him again?

We had a few brief encounters a few years later.

When you saw him again did you feel that it had been worth the heartbreak?

He was worth the heartbreak. I decided. I don’t know what I would decide now.

In “Cake,” you write briefly about your ancestors making cake in Belarus. What did it mean to you to think back to that?

I went there with a group of cousins, we took a family trip through the villages that the various relatives had come from. We called it “The Trip of What Was No Longer There,” or I called it [that], because, obviously, nobody was left. The sprinkling of shacks. We were able to stand in places of what once was. This was where they lived, more or less. It’s some kind of mythical, magical time beset with troubles and persecution, hand in hand with the most lovely, heartwarming stories of picking blueberries, and having this lovely life in the village. Like a lyrical Chagall painting next to a pogrom.

What would you say is the worst Jewish cake?

The one that you call angel torte. It’s like sponge. We’d have to drink a gallon of tea with each bite. I ate it, but I never understood it.

What are your go-to cakes?

Lemon pound cake is the go-to for everything. Lemon, and pound, and cake are three beautiful words together. And then olive oil cake, with raspberries thrown in. And pavlova is more festive and dinner party-ish.

Do you feel that the conversations you have with loved ones over cake are meaningfully different from the ones you have without cake?

There’s more of a sense of contentment and wellbeing when somebody sits down with you and says here’s a cup of tea, here’s a cake, let’s just take this moment together. I always think that all sorrows evaporate when you’re having a slice of cake. You really are in the moment. You stop for something in a way that’s different.

The last line of the book is “We really want to live.” I love that. How did you come to that lesson from cake?

Because we want to be happy. Who knows where those sentences come from. They just pop out.