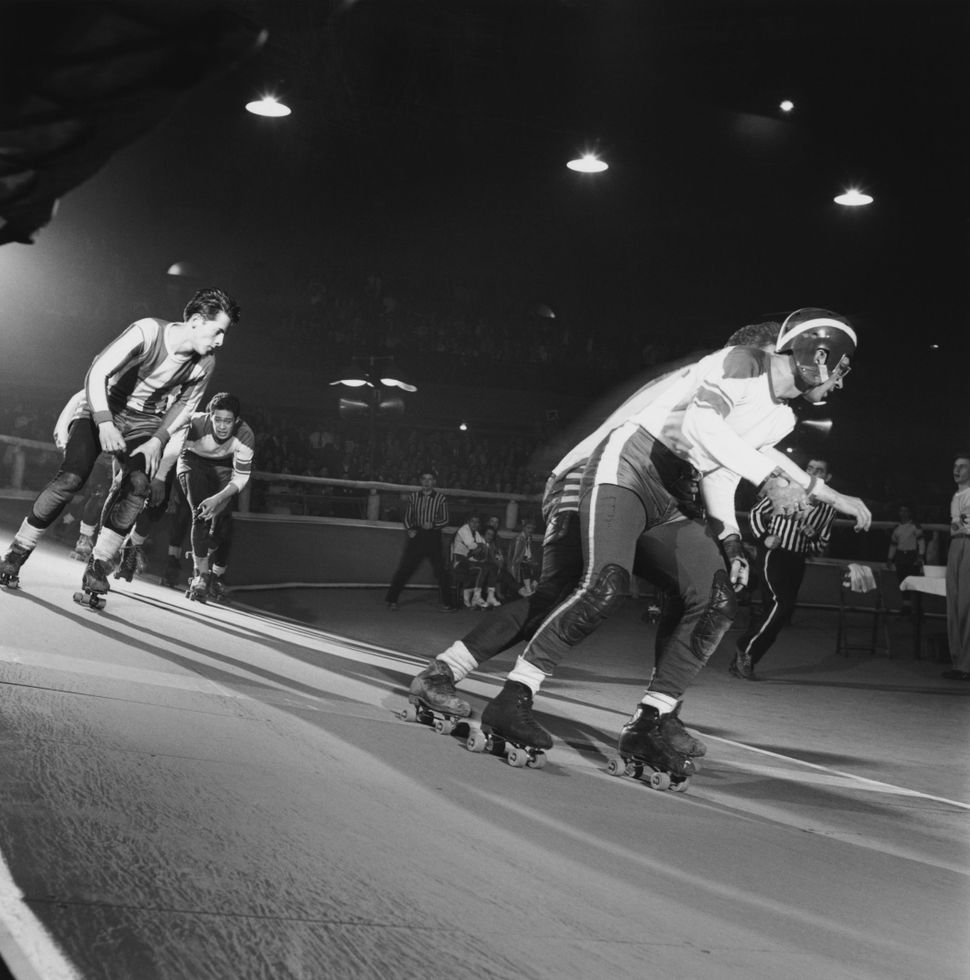 Who would have thought that the roller derby, a roughhouse spectacle where skaters elbow and knee each other relentlessly, was really a Peaceable Kingdom of friendly violence and Yiddishkeit? The death in early July at age 87 of the American Jewish entrepreneur Jerry Seltzer, owner and manager of the last touring professional roller derby league, turns a page on an activity with a surprising amount of Jewish inspiration.

A product of Jewish Chicago, roller derby was championed there in 1935 by Leo Seltzer, a businessman who had cashed in on Depression-era heartbreak endurance spectacles such as dance marathons, which devolved into days-long ordeals where exhausted contestants desperate for cash prizes slouched around trying not to collapse, as evoked in the novel “They Shoot Horses, Don’t They?”

Seltzer was the son of a Romanian Jewish craftsman trained to build horse-drawn carriages, according to Frank Deford, historian of the roller derby, which from its beginnings was a working class survival epic. Endless turns around the banked curve of a rink demanded stamina and survival, with Jewish spectators, among others, drawn to the heartache and shtarkayt expected of participants.

Roller derby changed from test of stamina to humorous drama with contributions in 1937 by Leo Seltzer’s friend Damon Runyon, the sportswriter and author whose Broadway characters inspired the musical “Guys and Dolls”

Runyon grasped the narrative requirements for compelling sports activity, outsized dramatic rivalries that drew spectator loyalty, as well as characterizations for performers to attract loyal followings. These elements went into his advice to Seltzer, including adding confrontations, score-settling, and expectation of pain, amounting to an overall sense of community. Although not Jewish himself, Runyon was likened to the Russian Jewish writer Isaac Babel for his empathetic tales of New York lowlifes. Daniel Schwarz’s “Broadway Boogie Woogie” reminds us that Runyon’s characters include the endearingly portrayed baddies “Jew Louie,” “Sam the Gonoph,” and “Izzy Cheesecake.”

The schlemiels and schlimazels of Runyonland are everywhere visible in roller derby, with the added factor of nobility, inspired by mettle and tenacity. Unlike slapstick comedians, derby protagonists hurt when they are elbowed, kneed, or knocked to the ground. They painstakingly communicate the suffering involved, sometimes as if recalling long-ago lessons in method acting, before shrugging off the aches and continuing around the track, seeking reparations. Jewish audiences especially would kvell at their stick-to-it-iveness.

Jeffrey Gurock’s “Jews in Gotham: New York Jews in a Changing City, 1920-2010” notes that on typical Saturday nights in Jamaica, Queens in the 1930s, young Jewish men “might find entertainment at the Jamaica Arena, where for sixty-five cents they could enjoy a boxing or wrestling card, roller skating, or the roller derby.”

Also common to the Runyon and Seltzer sensibility was the communal acceptance of roller derby, open to all participants regardless of race, religion, or even disability. According to one pioneering skater, starting in the 1930s, women, African Americans, and anyone else who wanted to join was welcomed. The Jewish skater Jay Levy’s deafness prevented him from hearing the referee’s whistle, so officials flashed strobe lights at key moments to alert him to changes in play. Another derby star, Slamming Sammy Skobel, was legally blind, but skated nonetheless for two decades. The maven David Block quotes still another participant:

“Roller Derby embraced African-Americans. That was a whole new thing for me. We were one big happy family because we were all together. There was no Black, no White. We were all one.”

Jerry Seltzer consolidated these exemplary achievements in mutual tolerance by shortening the length of the skating track, intensifying the action and making tours easier to set up and dismantle. Yet by 1973, the league was no longer economically viable, so it was disbanded. Before closing it down, Seltzer produced a gritty documentary, “Derby,” revealing some of the backstage camaraderie of the events, which would later inspire the Hollywood film “Whip It” focusing on women’s roller derby.

Somehow, roller derby had always been a Jewish women’s sport waiting to happen. In recent decades, Seltzer has maintained a blog applauding the unsuspected revival of amateur roller derby teams worldwide. There are over 2,000 amateur leagues in nations from Israel to Egypt. Skaters follow the tradition of concocting stage names to identify themselves, in the way that other minorities, including drag queens, have done.

Whereas in past generations, American Jews changed their names to better assimilate into a White Anglo-Saxon Protestant society, today roller derby stars change their names to blazon their identity to the crowd. So an athlete who calls herself Pnina Rosendoom who has skated for the Tel Aviv Thunder Girls, likened the activity to “friendly violence,” which is certainly superior to the unfriendly kind. The derby is so well established as an activity for women that a coffee table book has been published featuring “thirty hip knitting patterns” created by “sassy roller derby girls.”

Leading these trends, American Jewish celebrants have skated under the sobriquets of Mazel Tov Cocktail, Gefilte Fists, and Matza Brawl, with matches refereed by someone called Jew’d Law. A former participant named Sara Cohen accepted her husband Gabriel’s suggestion that she should skate under the moniker of Fatal Dreidel Recently, the TV actress Mayim Bialik tweeted to express her delight that a Jewish roller derby competitor had dubbed herself Mayhem Bialik.

While such food and pop culture-imbued epithets may inspire a chuckle, the tradition is taken farther by other skaters who opt for raucous and obscene allusions in their own self-labelings. The libertarian freedom of expression displayed may stymie Seltzer’s long-held hope that roller derby would someday be accepted as an Olympic sport, since major networks would not appreciate their sportscasters calling out raunchy pseudonyms of female athletes. Even so, American synagogues, such as B’nai Israel Congregation in Olean, New York, schedule field trips to cheer roller derby matches, while Rabbi Dana A. Benson of Temple Beth Am in Seattle lists online among her avocations, watching “her partner, Gina, play roller derby for Rat City Roller Derby.” And the Jewish Roller Derby team unites others among the faithful.

So roller derby is at once more, and less, than an Olympic sport. Social and cultural historians Adele Pavlidis and Simone Fullagar argue that the “lifestyle sport” offers a place for women to “experience their emotions differently, embrace pain and overcome limits,” while Colleen Arendt, a specialist in communication studies, states that the derby “has come to serve as a site of gender rebellion and emancipation that empowers participants.” And, of course, to appreciate, and experience solidarity for, their Judaism.