Tarantino’s “Hollywood” Has A Polanski Problem 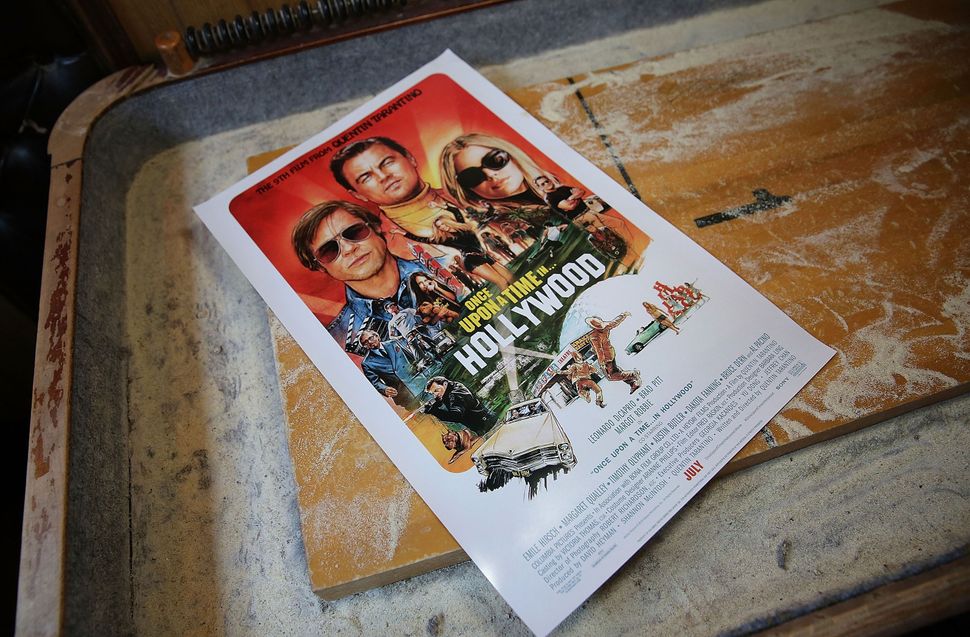 A poster for “Once Upon a Time in… Hollywood.” Image by Getty/Rachel Murray/Stringer

This post contains major plot spoilers for “Once Upon a Time… in Hollywood.”

In “The White Album,” Joan Didion famously described the atmosphere of California in the aftermath of the Tate murders. “I remember all of the day’s misinformation very clearly,” Didion wrote, “and I also remember this, and wish I did not: I remember that no one was surprised.”

Quentin Tarantino’s ninth film, “One Upon a Time… in Hollywood,” does surprise. But that surprise – a nervy subversion of historical expectation – assumes you think you know what’s coming. In fact, a third of the film and all of its tension only scans if you come in with prior knowledge. It demands you know that, on the evening of August 8, and into the early morning of August 9, 1969, Tex Watson, Susan Atkins and Patricia Krenwinkle brutally murdered an eight-and-a-half-month pregnant Sharon Tate and her three houseguests at 10050 Cielo Drive while her husband, director Roman Polanski, was in Europe for work.

That doesn’t happen here – rather, the would-be murderers are viciously killed at the home of Tate’s neighbor, a faded TV western star named Rick Dalton (Leonardo DiCaprio) whose career slump is the true subject of the film.

Students of Tarantino have noticed his attempts to build a universe through his filmography. His characters smoke a fictional cigarette brand, Red Apple. Devotees have hoped for a filmed family reunion of the brothers, Vincent and Vic Vega, who have never appeared on screen – or even in the same movie – together, but nonetheless suggest a spirit of oeuvre-wide continuity. But on a larger theme, Tarantino’s work has been known to present alternate histories colored by effective vengeance. In “Django Unchained” and “Inglorious Basterds,” for instance, slave owners and Hitler and the rest of the Reich regulars are, respectively, immolated in a bloody denouement. These gory motifs, a history steeped in deserved blood, animate the ethics of all of his films.

The moral arc of Tarantino’s universe bends towards righteous violence. In this film, a series of LSD-inspired brainings executed by stuntman Cliff Booth (Brad Pitt) spares Tate, her onetime lover Jay Sebring (Emile Hirsch), Abigail Folger and Wojciech Frykowski. More troublingly, though, is this fable’s unspoken wish, present if only in implication: A desire not just to rescue Tate, but her husband.

Roman Polanski (played by Rafal Zawierucha) is in this film only briefly. It’s hard to make out his lines of dialogue – limited to directing staff at an airport to his luggage, speaking to his dog as he prepares his French press breakfast, greeting Steve McQueen in an Austin Powers-type getup at the Playboy Mansion. McQueen (Damian Lewis) explains to a partygoer that the moment “the little Polish prick f*cks things up” Sebring will be there to win Sharon back. But even if Polanski screws up, Tarantino is giving him a second chance: To not screw up in the unforgivable way we all remember.

Tarantino said he did not approach the Oscar-winning director before shooting the film, but he recently told Deadline Polanski reached out to him. To assuage any of Polanski’s concerns, Tarantino allowed a mutual acquaintance to read the screenplay and report back to Polanski, who lives in Europe as a fugitive from the American justice system. Polanski, Tarantino said, was ok with it, and it’s no wonder. In the film, his second wife, played by Margot Robbie, walks away. We don’t see her murder. Less a character than a sprite of the times, all we really see of Tate is her trip to watch a film she’s featured in, her dinner at El Coyote Cafe and her dance break to a Paul Revere and the Raiders record. Sharon Tate in no way affects the plot, as much as her survival would change our history.

Nowhere is it hinted at that Polanski would one day plead guilty to unlawful sex with a 13-year-old girl and flee the United States on the eve of his sentencing. In fact, by keeping Tate alive, Tarantino opens the door to a timeline in which Polanski never committed the offense he’s been running from since 1977. He posits a world where Polanski may have become a committed family man or, at the very least, had a very different life. In so doing, Tarantino echoes the defense used by many: Had Tate not died so tragically, Polanski would never have pursued his own crime. (That Polanski may also have escaped his formative childhood trauma of the Holocaust is not broached – in “Inglorious Basterds” Tarantino torches Hitler in 1944, too late to save young Roman’s parents.)

Tarantino was among Polanski’s defenders. In a 2003 interview with Howard Stern, Tarantino insisted that Samantha Geimer was not raped by Polanski, and that, even though she was being plied with drugs and alcohol, she “wanted to have it.”

“She was down with this,” Tarantino told Stern. (He later apologized to Geimer, following public backlash, saying he “incorrectly played devil’s advocate in the debate for the sake of being provocative.”)

At its core, “Once Upon a Time… in Hollywood,” is wish fulfillment and nostalgia tourism. It fondly recalls a time in the industry where campy programming proliferated on TV and car culture, good music and technicolor left its pixie dust on everything. The tumult of the times is only teased by radio news about Vietnam and Bobby Kennedy’s assassination. That this summer of love masks something darker is explored mainly in an excursion to Spahn Ranch, where the Manson Family have taken over and, the viewer assumes, from where they will one day make good on their menace.

Of course, they don’t. The murders that marked the end of the 1960s for many never happen, and so, the fever never breaks. A has-been like Rick Dalton – a washed-up matinee idol of the type Tarantino casts in regular rotation – gets another chance at relevance when he’s invited up the gated drive of 10050 Cielo as the film ends. From there he’ll probably be in a Polanski picture. And since this is a fairy tale, Polanski will likely continue to make pictures in Hollywood untouched by scandal. (Manson may go on to get a record deal.)

This is the true wish – that no infamy, and no shade of #MeToo reckoning, will ever visit the Hollywood Hills. It’s a wish that reeks of privilege. As revisionism, it is unethical, letting Polanski off the hook. Innocent victims survive this world’s course of events, but a guilty party is likely exonerated. Is that a proper trade off? And does Tarantino get a pass just because the credits roll before we see this all play out?

The real world diverges. This weekend in Los Angeles, a billboard for “Once Upon a Time…” was vandalized. Investor and convicted sex offender Jeffrey Epstein’s face was posted over Leonardo DiCaprio’s while Polanski’s was imposed onto Brad Pitt’s. The title of the film was also altered to “Once Upon a Time in Pedowood.” The fantasy is not blithely accepted in a reality where real damage was done. Not everyone deserves a Hollywood ending.

Tarantino’s “Hollywood” Has A Polanski Problem