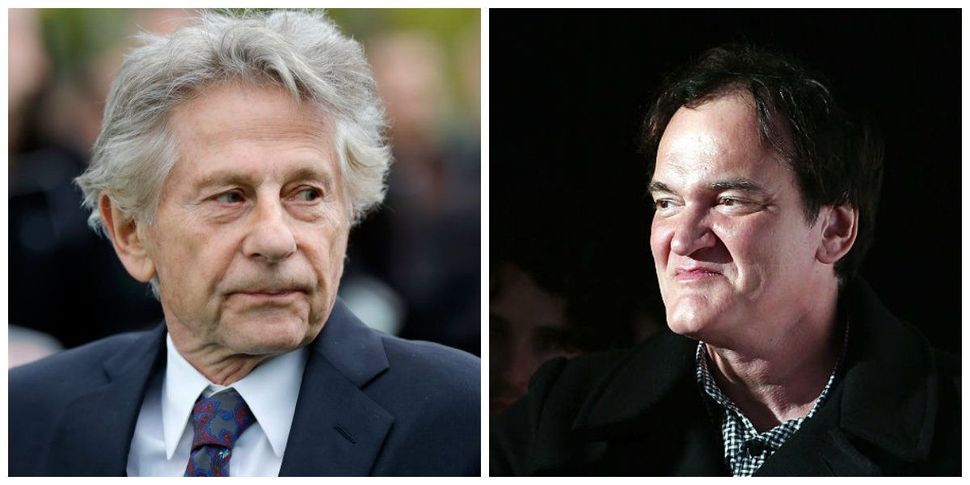 One consequence of brilliance is that your words may ring so true that their repetition renders them cliche.

Still, Maya Angelou’s words bare repeating: when a person shows you who they are, believe them.

In recently resurfaced comments by Quentin Tarantino on Howard Stern’s radio show in 2003, in which Tarantino described director Roman Polanski’s drugging and rape of a 13 year-old girl as “not rape” and claimed that the child “wanted to have it,” Quentin Tarantino showed us who he really is. Tarantino apologized on Thursday, after Polanski’s victim Samantha Geimer said that Tarantino is wrong. “I’m not upset,” she told the Daily News, “but I would probably feel better if he realizes now that he was wrong, after 15 years, after hearing the facts.”

Quentin Tarantino in his words, his movies, and most recently in the Stern interview, has shown us who he is. Howard Stern, whose recently rehabilitated radio show should not be forgiven for its decades as a platform for live sexual harassment, has shown us who he is. Roman Polanski, who spent 42 days in jail after pleading guilty to raping a minor, spoke recently about how he can’t believe people won’t forget about his crimes, showing us for the umpteenth time who he is. So many men right now, on scales from defense of child rape to actual child rape, are showing us who they are: let’s believe them.

What is it about Howard Stern’s talk show that makes men feel so free to show their true selves?

Perhaps it’s the culture created by host Stern, who took to the airways mere hours after the shootings at Columbine to joke about how the shooters should have raped as many teen girls at gunpoint as possible.

In perhaps the most famous example, Stern’s decades of radio time provided over a dozen hours for now-President Donald Trump to brag about groping his wife in public and his dreams of giving Princess Diana an HIV test before having sex with her.

So it’s not surprising that male guests of Howard Stern, who currently boasts 30 million subscribers and is considered by otherwise conscientious audiences “one of the most deft interviewers in the business” (that, according to the New York Times) feel they have a wide berth to be themselves.

Quentin Tarantino, the filmmaker known for such movies as “Pulp Fiction” and “Inglorious Bastards” has been in the news recently. These days, to trend means to be haunted by quotes made in years past on Howard Stern’s talkshow. Stern serves as a kind of asbestos-covered blacklight, exposing the decay on the men around him.

Tarantino has been making headlines for his association with Harvey Weinstein, the accused assaulter and harasser of over 80 women. Every single one of Tarantino’s studio films have been produced by Harvey Weinstein’s Miramax Company or the Weinstein Company, except one. That one was produced by Weinstein’s brother, Bob Weinstein. Tarantino, who after the Weinstein allegations became public in October told the New York Times “I knew enough to do more than I did” has once again been implicated in a Weinstein assault story, this time by Uma Thurman, star of Tarantino and Weinstein’s films “Pulp Fiction” and “Kill Bill.” She told Times columnist Maureen Dowd that Tarantino was slow to respond to her fear of Weinstein, took it upon himself to spit in her face and choke her for a movie effect, and coerced her to ride in an unsafe vehicle to get a shot with her “hair blow[ing] the right way” (she ended up with a permanent injury.)

But forget the fruitless speculation that mining those events can uncover. Consider this quote, from a 2003 interview Tarantino did with Howard Stern. In a recording resurfaced by Jezebel earlier this week, Tarantino told Stern of the Polanski rape:

He didn’t rape a 13-year-old. It was statutory rape…he had sex with a minor. That’s not rape. To me, when you use the word rape, you’re talking about violent, throwing them down—it’s like one of the most violent crimes in the world. You can’t throw the word rape around.

When Stern’s co-host, Robin Quivers, pointed out that, as per court evidence, Polanski drugged his 13 year-old victim with quaaludes and fed her alcohol before the rape, Tarantino responded:

No, that was not the case AT ALL. She wanted to have it and dated the guy and—

Tarantino, in his apology to Samantha Geimer, said, “fifteen years later, I realize how wrong I was. Ms. Geimer WAS raped by Roman Polanski. When Howard brought up Polanski, I incorrectly played devil’s advocate in the debate for the sake of being provocative.”

Here’s the thing about “playing devil’s advocate” — not only is it unnecessary when discussing real cases of child rape on the radio, but also it’s not what Tarantino was doing in this interview. In fact, if you listen to the full clip, Tarantino is actually defending a separate interview in which he corrected a reporter who called Polanski a rapist. It was a point he made twice, publicly. “Look, she was down with this,” Tarantino tells Stern. Tarantino spends the segment of the interview carefully building an argument, which he never represents as anything other than his true opinion. He becomes heated and emotional about the “truth” about Polanski and Geimer. And here’s the thing about him pointing out that the event was “fifteen years ago” — fifteen years ago Mr. Tarantino was about to turn 40. Cell phones had cameras. The age of consent in America had been 16 or higher for over eighty years.

At 39 years-old, Quentin Tarantino alleged that a drugged 13 year-old can consent to sex, that her age doesn’t matter as long as she is willing. Fifteen years later, and the passage of time suddenly matters to him very much.