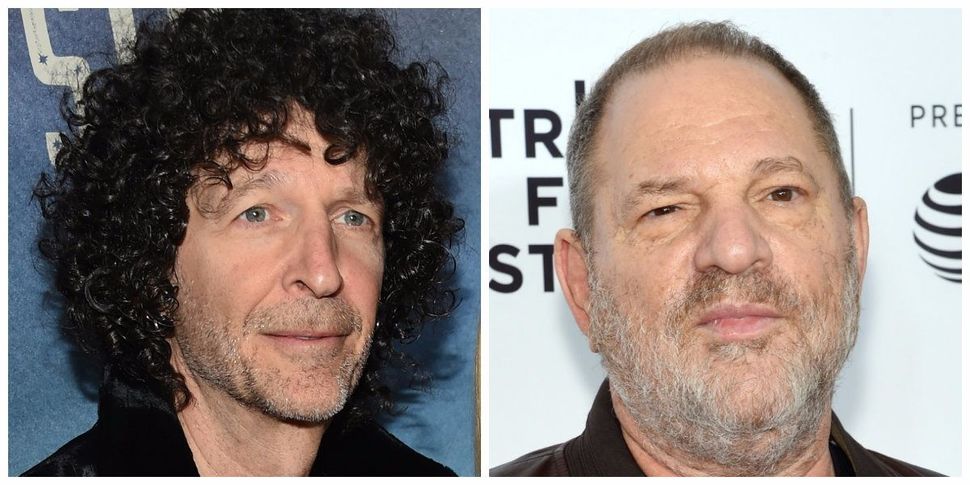 Howard Stern, who once suggested that the Columbine killers should have raped as many teenage girls as possible before murdering them, said on Wednesday that men who engage in sexual harassment are “freaks.”

Howard Stern’s fame, fortune, and even respect are built on decades of sexually harassing women.

At his first paid radio job in 1979, Stern began asking guests ultra-personal questions about their love lives. At his next DJ job, he gleefully writes in his memoir, Stern set up Penthouse “Pets” (women) on dates with convicted sex offenders. “I did anything to get noticed,” Stern writes.

On New York City’s WNBC in 1982, Stern pioneered a sketch show called “Virgin Mary Kong,” in which the Virgin Mary runs from a group of men who are trying to rape her so she won’t be able to call herself “Virgin” anymore. “At the end of the bit the Virgin Mother was impregnated by some dude who pushed her up against the wall of a singles bar. Anyway, I thought it was a great skit,” recalls Stern in his book.

In the following decades Stern devoted his show to what a New York Times article called “boob jobs, prostitutes, lesbians, and flatulence.” His 20-year run on WXRX eventually reached 20 million listeners. Stern suffered a minor setback in 1995 by joking about beloved Hispanic singer Selena’s murder and commenting, “Spanish people have the worst taste in music. They have no depth.” But after theorizing about whether the Columbine shooter “tried to have sex with any of the good looking girls” the day after the massacre, the station got a relatively small number of calls.

What about inviting young women who are trying to forward their careers to interview, picking apart their bodies, demanding information about their sex lives, and using sexual language to make them uncomfortable?

In a recently resurfaced interview with former Spice Girl Emma Bunton from 2005, Stern remarks, “You’ve got a hot little body.” Bunton says, “Thank you.” Stern muses, “I can see you girl-on-girl action, I can see you with two guys. I could see you doing a lot of things. Milkman’s daughter — 14 years old.” Burton giggles uncomfortably.

STERN I bet when you were young you started in with boys, right? You were very developed.

BUNTON I’m not going to talk to you about this.

STERN (Talking over her) 14? When did you get your period?

STERN: You like showing your body off. I see these pictures. You’re wearing sexy little outfits. You’re practically naked in some of them.

BUNTON: No, I think it’s cause — the older you get obviously — well, I’ve become more confident —

STERN:You want attention through your body and your face. You’re asking for it, and you’re going to get it. Cause Robin(Stern’s co-host)’s not here today so I can do you.

Howard Stern reached 20 million viewers on terrestrial radio by 2005 (when the Emma Bunton clip aired) and currently enjoys 30 million subscribers. The New York Times recently crowned Stern a “feminist” and, like Kimmel, “one of the most deft interviewers in the business.” In what world are the adults who enjoyed popular culture in the 2000s now casting around to understand what is creating a culture where over 50% of people are regularly sexually harassed?

Howard Stern has made a career of inviting women on his show in order to sexually humiliate them. If they don’t laugh along it hurts their careers. Stern uses his platform to invite other men onto his show to sexualize and rank women. It was on Stern’s show that President Trump confessed to barging in on naked beauty contestants unexpectedly, and encouraged Stern to call his daughter Ivanka “A piece of ass.” When Stern was pressed to release over a dozen hours of tape of interviews with Trump before the election, Stern said it was important for him to protect Trump. “It would be a betrayal,” he said.

Something that makes the Harvey Weinstein scandal so sinister is the way Weinstein allegedly silenced over 60 women for so many years. They kept their experiences secret even as they became massive stars or changed careers. Howard Stern has never been publicly accused of sexual assault or rape. His sexual harassment is public and accepted as a form of art.

On Wednesday Kimmel praised Stern’s Sirius FM talkshow. “The interviews, I think, are better than any interviews you see anywhere on television or radio or whatever,” Kimmel said, to applause. “But I also think that it’s not just the medium,” he added, “you seem to have changed a lot … really a totally different guy.”

Like Weinstein, Howard Stern “came of age in the 60s and 70s, when all the rules about behavior and culture in the workplace were different.” And maybe Stern is just an “old dinosaur learning new ways,” as Lisa Bloom would have it.

But if we want to look into why so many men rape, assault, and harass people, instead of just ringing our hands and wondering why when survivors bravely come forward, we have to look at the culture. So much of sexual harassment and assault allegations are he said-she said situations with no witnesses. With Howard Stern, the situation is four decades of carefully recorded he said, he said, he said, he said.

Howard Stern has harassed women for entertainment for forty years, shielded accused perpetrators, and with a fellow male comic’s help, is now a voice of truth in the Weinstein scandal. To complete the circle, Stern once had Weinstein on his show. Stern pressed Weinstein to admit that he could get sex from women in exchange for making them famous. “I wish, I wish,” Weinstein said. “You can’t walk into the room, pull your pants off, and say ‘okay honey let’s talk business?” Stern asked.

“We were born too late,” said Weinstein.