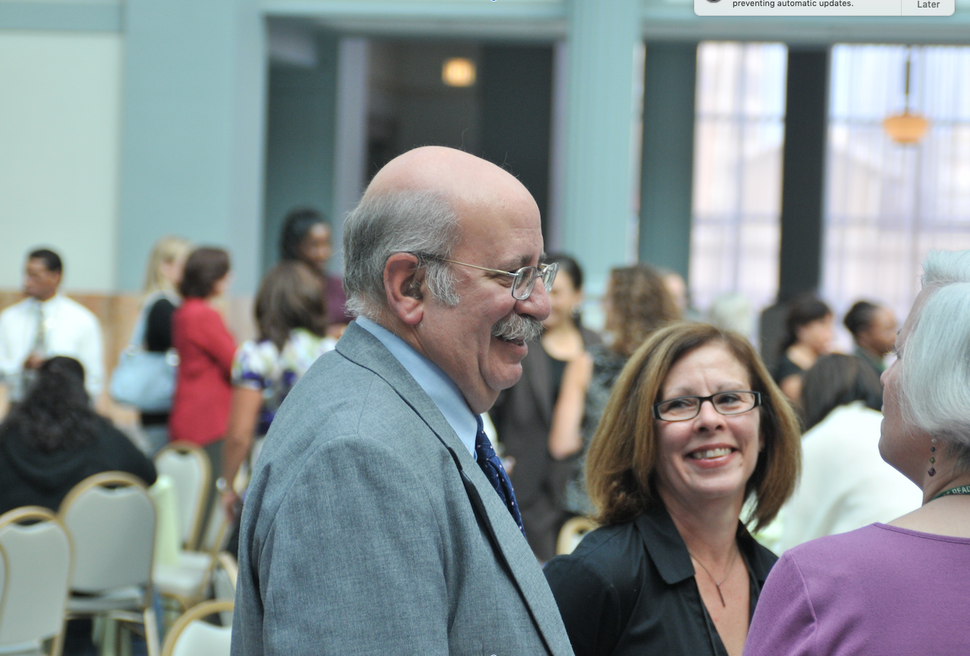 Flug’s life was one committed to service. As a student at Columbia University, Flug was active in CORE – the Congress of Racial Equality, a leading civil rights group that helped spearhead the Freedom Rides and Freedom Summer – throughout the 1960s, organizing demonstrations both in his native New York and into the deep south. In 1990, he began work at the Vivian G. Harsh Research Collection of Afro-American History and Literature at the Chicago Public Library’s Carter G. Woodson Regional Library, where he served not only as the senior archivist, but as shop steward, winning cases for the union.

“When I hired Michael I didn’t realize I was getting three people in one,” Robert Miller, the Harsh Collection’s curator, told the Forward. “He was a super archivist and he had an explicit understanding of the subject matter – which was African American history – and that’s due to his activism in CORE. He was also a marketing expert. His press releases were so good no one would touch a word of them when he sent a copy to the newspaper. (When he was at CORE he wrote for the newsletter.) Thirdly, he was also a community activist, he knew how to organize people to achieve goals, and he was a natural leader. In essence, he was exceptionally good.”

Miller says that Flug was also a remarkable editor, and that writers like Darlene Clark Hine, a leading expert on African American women’s history and Adam Green, a history professor at the University of Chicago, sought him out to read their manuscripts.

Flug was born in Brooklyn to Jewish parents involved in liberal politics. His father, Benjamin, died when he was nine and his mother, Shirley (nee Levine) was a public school teacher. Miller said that Flug’s mother was involved in the New York City teacher’s strike in 1968.

“He joked that he grew up in a family in which he always thought the two-party system was the Communists and the socialists,” Flug’s wife, Suzanne French, told Ben Joravsky of the Chicago Reader.

Flug moved out of Brooklyn when he was young, French said, moving to Long Island where “he faced terrible anti-Semitism from some of the kids.”

He made found company with other Jews and with black children.

“He learned at an early age that so much about what white society wants you to believe about black society is not true,” French said.

Flug was accepted to Columbia University on a scholarship. During that time, he was heavily involved in CORE, and travelled to Mississippi and North Carolina. He knew and marched with the late congressman Major Owens and Atlanta mayor Maynard Jackson in his time with the civil rights group, Miller said.

“He told me ‘I would have been a juvenile delinquent if it wasn’t for CORE,’” Miller said.

At an anti-segregation protest, in Durham, North Carolina, he was arrested immediately after proclaiming, “I’m happy to be here, brothers and sisters,” French told the Chicago Sun Times. He was held in jail three weeks and was convicted for inciting a riot. French estimated that Flug was arrested 26 or 27 times while working with CORE in the South.

Flug sat out the Vietnam War as a conscientious objector, the Sun Times reported, becoming a union organizer in Baltimore and traveling to Detroit as a compliance enforcer, visiting workplaces to ensure they had minority workers on staff.

Flug earned a Masters of archival administration at Wayne State University in Detroit and, while in Michigan, helped organize papers for Leon Trotsky’s secretary, Raya Dunayevskaya.

As archivist at the Harsh collection, he helped guide visitors and scholars through the library’s huge wealth of materials. Miller says his finding aids – a source indexing specific records in an archive – were legendary.

Flug left a lasting impression on many whom he helped scour the Harsh’s vast collection. The mystery writer Sara Paretsky, who came to the Woodson Library to research the FDR-era Work’s Progress Administration’s Negro Theatre Project, was so smitten, she based an archivist character on him in her 2013 novel “Critical Mass,” the Sun Times reported.

Miller also knew him to stick up for clerks when he felt they were mistreated. “His whole life was dedicated to serving the downtrodden,” Miller said.

Even after Flug retired, in 2010, after 30 years at the collection, he kept on coming back to help.

“He had an aura about him,” Miller said. “He believed so much in the cause, and this is all because of his background.”

On the occasion of Flug’s retirement, Chicago poet Haki Madhubuti wrote “A Poem for Michael Flug,” in his honor.

“Keeping papers alive/books altered the culture of his life,/a DNA effect that transported him southwest of/wherever he was meant to be,” the poem begins, going on to detail all the media Flug handled from “books, journals, magazines and newspapers,” to “undeciphered african languages, scholar’s codes and/playwriter’s words, nuances and stage props/all spoke to him in rooms never destined to be his.” It ends, “you leave prodigious fingerprints.”

Michael Flug is survived by French, her sons Michael and Kevin French, his brother Jon and two grandchildren. A memorial is scheduled from 10 a.m. to 2 p.m. on August 3 in the lower-level reception hall of the Harold Washington Library Center in Chicago.