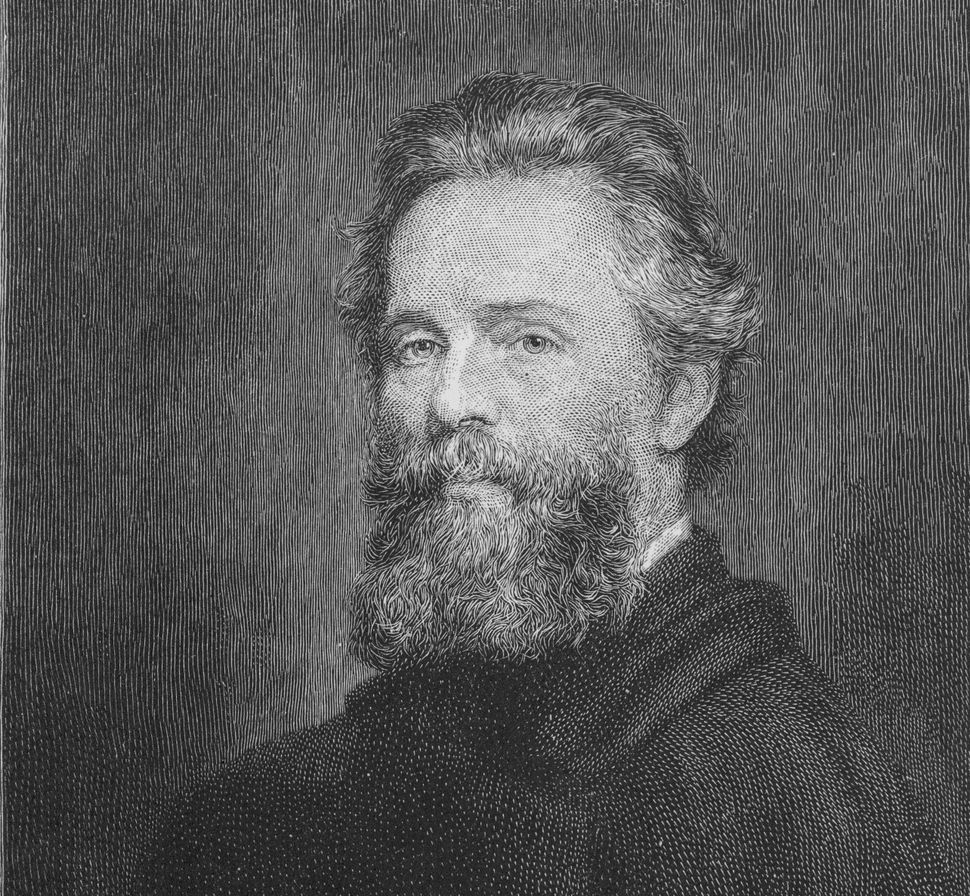 In 1857, at a personal and professional low, Herman Melville made a pilgrimage to the Holy Land. Since Melville was short of funds, his father-in-law financed the trip.

Melville, whose 200th birthday is August 1, was reeling from a string of literary flops, beginning in 1851, with the release of his then-maligned and misunderstood “Moby-Dick.” His farm was failing and so, by some accounts, was his marriage. He had sunk into a deep depression and travel was proposed as a kind of cure. Arriving in Jerusalem, the author’s spirits did anything but lift.

In his journal, Melville first described the city as looking “exactly like arid rocks.” The rocks became a theme: “Judea is one accumulation of stone,” he wrote in a later entry, “stony torrents & stony roads; stony walls & stony fields, stony houses & stony tombs; stony eyes & stony hearts. Before you and behind you are stones.”

Melville spent some of his 19 days in Palestine at Mount Hope, a Christian-owned agricultural settlement outside of Jaffa, whose mission was to make farmers out of local Jews to accelerate the Second Coming. The project, to Melville’s mind, was a dubious one.

“The idea of making farmers of the Jews is in vain,” Melville wrote. “In the first place Judea is a desert with few exceptions. In the second place, the Jews hate farming. All who cultivate the soil in Palestine are Arabs. The Jews dare not live outside walled towns of villages for fear of the malicious persecution of Arabs and Turks. Besides, the number of Jews in Palestine is comparatively small. And how are the hosts of them scattered in other lands to be brought here? Only by a miracle.”

While by his own account Melville found the Holy Land and its profusion of flies, rocks, poverty and Christian street preachers miserable, his trip’s worst effects would follow him home. 19 years after his journey, Melville published, likely at his own expense, his last major work and the longest poem in American letters: “Clarel: A Poem and Pilgrimage to the Holy Land,” an epic that, according to his wife, Elizabeth Shaw, “undermined all our happiness.” The nearly 18,000 line poem was yet another failure upon its release in 1876. The New York Times said it “should have been written in prose,” and the Independent called it “destitute of interest or metrical skill.”

The poem’s rhymed verse is often clumsy, and, to a modern reader, the diction and dense biblical references prove a barrier to entry, but “Clarel” is also a fascinating and forgotten artifact of an American master, and one of considerable interest to Jewish readers.

“Clarel,” which follows the pilgrimage of an eponymous American theology student, is singular not just for its length – longer than the “Iliad,” “Aeneid” or “Paradise Lost” – but for its interest in Judaism and Jews.

As scholars Louise Mayo and Brendan Katzir have both noted, the diversity of Jewish life in the Holy Land present in “Clarel” eschews the 19th Century default for Jewish characters as stubborn or alien adherents to an exotic faith. As in the Israel of today, Clarel’s Palestine is host to all kinds of Jews, whose faith, politics, origins and reasons for being there diverge greatly.

The first Jew encountered by Clarel is Abdon, a “Black Jew” from “far Cochin” where his family, “never from true allegiance torn, kept Moses’ law.” Abdon runs the boarding house in Jerusalem where Clarel is staying and came “From Ind to Zion… less to live, than end at home.” By including an Indian Jew, “descended from those dubious men, the unreturning tribes,” Melville shows an understanding of the reach of diasporic Jewry. In Abdon, Melville is aware of the effects of pious Jews, making reference to his mezuzah, tallit and scroll – an “Indian Pentateuch.”

While a minor player, Abdon is an entree to the poem’s break from stock characters represented most vividly in the larger figures of a family of American Zionists.

At the Western Wall – which Melville depicts with great care – Clarel runs into a man “scarcely Hebrew in his dress” but “rural, and hard cheek’s swarthiness/With nothing of an Eastern air.” He learns that this man is Nathan, “sprung from worthy stock.” The stock is not Jewish, rather, Nathan is descended from Puritans who settled rural Illinois as farmers. As a young man, Nathan has a crisis of faith and, after a time as a deist, converts to Judaism to marry an American Jewess named Agar. Years later, still wracked by doubt and searching for meaning, Nathan becomes a Zionist, aspiring to join “Some zealous Jews on alien soil” who “maintain the dream” of the Pesach salute, “Next year in Jerusalem.” Agar, Nathan and their two young children relocate to the Sharon plain, but are under constant threat from Arab raiders. Nathan has his wife and children – one of whom later dies in infancy – move to Jerusalem while he remains on their tract of farmland.

Clarel takes an interest in Nathan because he is smitten with the man’s daughter, Ruth, described in virginal terms and with “features finely Hagarene.” Ruth is seen delivering bread to a proselytizing pamphleteer named Nehemiah and, childlike, in the lap of her mother. As a poetic obsession, Mayo argues in her 1976 paper “Herman Melville, the Jew and Judaism,” Ruth is underdeveloped like the other literary Jewesses of the 19th Century (e.g. Rebecca from “Ivanhoe”). Likewise, Agar is a maternal figure of the kind Clarel, who grew up without a mother, comes to love for her “frank demeanor kind,” which is likened to the Madonna.

Soon after the beginning of Ruth and Clarel’s courtship, Nathan dies. He’s killed by Arab raiders for what Melville frames as a foolhardy project of “seed and tillage” in Palestine. (The savage razing of Nathan’s farm may in fact have been inspired by the fate of Melville’s hosts at Mount Hope, the Groβsteinbecks – ancestors of John Steinbeck – who were attacked by Arabs, who killed one of the family’s men, Friedrich, and raped two of the women.)

Clarel is forbidden from sitting shiva with the family because he is a Christian – a ban which appears to be a bit of poetic license to propel the plot – and goes on a journey to Bethlehem and Mar Saba instead. On his way, he and his party of diverse, Chaucerian characters come across Margoth, a hammer-toting Jewish geologist who has a great time mocking the pious.

Pegged as an apostate, Margoth blasphemes for fun, crowing to one believer “Earthquakes lay flat your crucifix: All’s, all’s geology, I trowe” and saying of Jerusalem, “Stale is she! Lay flat the walls, let in the air/That folk no more may sicken there!” and calls for technical improvements over hallowed ground: “Rails, wires, from Olivet [the Mount of Olives] to the sea.”

Margoth is an annoying character (but not an anti-Semitic caricature) who delivers a central tension: That between scientific reason and faith. Melville was writing in the shade of Darwin’s theories, which cracked something in his own ambivalent beliefs. But Margoth’s apostasy also prompts one of 19th century literature’s most nuanced and literate understandings of Jews’ place in history.

In Canto 22, “Concerning Hebrews,” a priest and biblical literalist named Derwent and a religious skeptic named Rolfe – who is the poem’s most direct Melvillian mouthpiece – discuss the faith of Jews and whether or not Margoth is an outlier, or representative of the faithlessness of the contemporary Chosen. In their dialogue, they make mention of a long history of great Jewish doubters from Hillel and the Essene sect to Spinoza, Moses Mendehlsson and Uriel Acosta.

As Katzir said in a 2018 lecture, “Figures of the Jew in Melville’s ‘Clarel,’” while Derwent is inclined to read these men and their movements as tainting a truer faith, Rolfe argues that they are in fact a sign of Judaism’s unparalleled resilience in adaptability in, as Katzir noted, its “ability to absorb its own freethinkers.”

“Aaron’s gemmed vest Will long outlive Genevan cloth, Nothing in time’s old camphor chest So little subject of the moth. But Rabbis have their troublers too. Nay, if through dusty stalls we look, Happly we disinter to view More than one freethinking Jew That in his day with vigor shook Faith’s leaning tower.”

So says Rolfe of Judaism’s unique capacity for survival.

Melville’s “Clarel” tackles cosmic ideas of doubt, belief, science and the interplay of a gilded biblical past with the foundering present of the late Ottoman outpost of 19th century Palestine. With his treatment of Jews, the author touches on some particulars that still resonate today and show a profound empathy and understanding for their time.

The last Jew Clarel meets is a young lothario from Lyon who, over a night where the two share a room in Bethlehem, jokes with the young divinity student about the legendary appeal of Jewish women, falsely identifying them as the consorts of everyone from Nero to the Christian emperors to the woman who posed for Titian’s Venus.

The unnamed character doesn’t ever announce himself as a Jew, but rather, when Clarel asks him why he is so preoccupied with them, answers that he doesn’t think Jews are that special at all, saying, “they share the oddity of the Gypsies heir: about them why not make ado? The Parsees are an odd tribe too; Dispersed, no country and yet hold by immemorial rights, we’re told.”

Later, Clarel meets a Russian traveler who tells him the truth about his former roommate. When Clarel wonders why the man from Lyon wouldn’t identify himself as Jewish, the Russian responds by saying “Society is not quite catholic, you know, retains some prejudices yet,” adding that a Jew must either “melt or be separate,” which Mayo identifies as a canny encapsulation of diasporic Jews predicament of assimilation or integration.

When Clarel returns from his journey to the sites of Christ’s ministry and passion, he learns that both Ruth and Agar died of grief and he curses the mourners at their graves, railing that the tribe “denied me access to this virgin’s side.” This trauma, a melodramatic convention, leads Clarel to renounce Judaism, but also his own Christian faith.

Even forgetting Melville’s trip to Palestine, “Clarel” can be read as a deeply autobiographical confession – a gospel of a man struck by doubt. One thing Melville never doubts, in all of his works, is an essential humanity common to all mankind.

The author’s empathy extends to a stoic, depressive scrivener; a sea captain driven to madness and doom in the pursuit of revenge; a stammering English foundling subjected to a kangaroo court. In “Clarel,” Melville, ahead of his time in so many ways, proved to be for the ages, treating Jews with humanity at a time when nearly no other Christian writers cared to.

One need only look to Melville’s life to understand why. Poor, underappreciated and misunderstood in his time on earth, how could he not find common cause with a people kept from a seat at the world’s table – even in their own homeland?