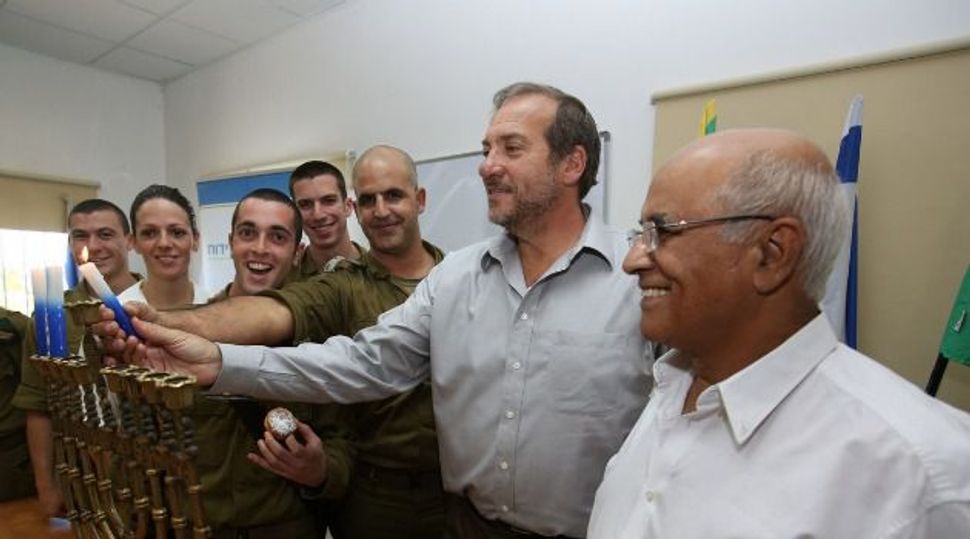 It was the early Jewish nationalist Nathan Birnbaum who coined the term “Zionism” in 1890 to describe the movement to establish a secular Jewish state in Palestine. The idea’s essence was defined in the very name of the journal he published to advance the cause: “Self-Emancipation!”

But now, the largest evangelical Christian group supporting Israel financially is set to independently take on a mission long seen as central to this self-conception: promoting, funding and implementing mass aliyah, or immigration, of large numbers of Jews to Israel from their native countries.

On October 6, the International Fellowship of Christians and Jews announced it plans to launch its own separate aliyah operation, headed by Israel’s former top official dealing with the issue, and backed by millions of dollars collected from American evangelical Christians.

The group’s plan has set off a furious controversy on multiple levels. The pushback ranges from turf-oriented objections by the Jewish Agency for Israel, the Zionist movement’s longtime vehicle for promoting and implementing aliyah, to broader concerns about the ideological and even theological implications of the Christian group’s move.

“There’s a certain irony here when you see Christian evangelicals working to move Jews out of their countries, which is very different from the ideology that says Jews should live everywhere,” said Jonathan Sarna, a professor of American history at Brandeis University. He noted that by moving full force into the field of aliyah, the Fellowship and its Christian backers are, in fact, taking the side of “traditional Zionists” who believe in promoting immigration of Jews to Israel, as opposed to the ideology of many American Jewish groups that believe in helping Jews live full and safe lives in their countries of residence. “But, in any case, we’re lucky to have money on both sides of this debate,” Sarna added.

IFCJ, commonly referred to as the Fellowship, and its leader, the American Israeli rabbi Yechiel Eckstein, see the move into mass aliyah as a natural expansion. The group, which Eckstein founded in 1983 to cultivate evangelical Christian support for Israel and for Jews seen as imperiled in the Soviet Union, is today an organizational giant with an annual budget of $111 million in 2012. In addition to its own initiatives to aid needy Jews around the world and to facilitate their immigration to Israel, the Fellowship gives millions each year to JAFI.

In 2007, that support led JAFI to offer Eckstein a seat on its board, including membership on the committee overseeing the agency’s budget, and chairmanship of the agency’s aliyah and rescue committee.

Notwithstanding the Orthodox cleric’s own religious and ethnic background, critics voiced concern then about the precedent of giving a group representing the interests of Christian evangelicals, however friendly, a voice in Zionism’s most important world vehicle. Eckstein did little to assuage their concern when he summed up what the move meant.

“For the first time,” he said then, “Christians, who are mainly my constituency, will have a seat at the table.”

The Fellowship’s new move to set up its own aliyah operation will confront once again the sense of discomfort some Jews feel about the direct involvement of evangelicals in an operation that aims not just to help Jews in need, but also to fulfill the conditions many evangelicals see as a prerequisite for the second coming of Christ.

“It is for their own salvation, not for Jewish salvation, it’s so they will see the second coming of the messiah,” said Abraham Foxman, national director of the Anti-Defamation League and a longtime critic of Eckstein. “A campaign of Christians to send Jews to Israel is morally offensive.”

Eckstein argued that these concerns have long ago been answered and forgotten. “We’ve gone through that whole thing here in Israel,” he said in a phone interview with the Forward from his base in Jerusalem. “That concern is so far beyond us.”

In fact, IFCJ has been involved indirectly with immigration to Israel for the past 15 years. But its role was behind the scenes and channeled, for the most part, through JAFI, to which it provided funds. Most recently, the Fellowship picked up the tab for airlifts of Jews from Ukraine to Israel following Russia’s invasion of Ukraine and fighting between the government in Kiev and pro-Russian separatists. The group estimates that over the years, it has provided $150 million to support the immigration of Jews to Israel.

This is not even IFCJ’s first foray into the aliyah field independent of JAFI. In 2001, at the request of Benjamin Netanyahu, who was not in politics at the time, the Fellowship provided $2 million to start Nefesh B’Nefesh, an organization helping North American Jews immigrate to Israel, making it the first organization to challenge JAFI’s monopoly on aliyah.

But this partnership was short lived.

At the behest of the immigrants, many of whom came from Orthodox backgrounds, Nefesh B’Nefesh downplayed the role of Christians in funding their immigration. Within a year, this led to IFCJ pulling out its funding.

Nefesh B’Nefesh declined to comment on its relationship with the Fellowship.

The Fellowship’s decision to fund its own aliyah operation rather than to support JAFI’s work has already had a big impact on the latter group. In early October Eckstein hired Eli Cohen, JAFI’s top aliyah official, to head IFCJ’s new operation.

The Fellowship will begin its work in Ukraine in the coming months and plans to expand later into Russia and other countries of the Former Soviet Union. By the end of December, the Fellowship hopes to send its first charter flight of immigrants from Ukraine to Israel.

Lurking in the background of the Fellowship’s new move is its fall-out with JAFI over the latter’s strategic plan adopted in 2010, which gives priority to strengthening Jewish identity. Under the plan, aliyah will still enjoy the agency’s support, especially when it relates to Jews fleeing anti-Semitism and hardship, but resources and attention will be directed to helping Jewish communities thrive, instead of only advocating aliyah.

“I realized that the Jewish Agency… doesn’t have aliyah at the apex of their goal, and meanwhile aliyah still is at the top of our agenda,” Eckstein said, adding that “with anti-Semitism growing, there’s a need for aliyah to be central in coming years.”

Eckstein rejected the suggestion that Jewish mistrust of possible missionary activity and a reluctance to see Christians publicly funding a Jewish endeavor could re-emerge. The environment in the Former Soviet Union, he said, is considerably more favorable than it was in the United States and Canada in the Nefesh B’Nefesh case.

In the FSU, he noted, the Fellowship has already devoted years of work to helping Jews, including covering security costs in Jewish institutions, helping Jews struggling with poverty and backing Jewish education. This relationship, which is estimated at $25 million a year, has been largely delivered through the Hasidic group Chabad, through the ORT education system and via local Orthodox rabbis. Eckstein expects that all these players will now vouch for their Christian evangelical supporters as they work to assist Jews in realizing the Zionist dream.

But Eckstein has no intention of stopping with Ukraine and Russia. After these aliyah projects are in full swing, the group intends to expand to Europe — with a special emphasis on France — and to Latin America. France has already seen a significant hike in immigration to Israel following a recent surge in anti-Semitism, but Israeli officials have said they believe the potential for French Jewish aliyah is much higher.

Entering Europe, however, could prove to be more of a challenge for Eckstein and his organization.

“As most of the olim [emigres to Israel] from France who decide to make aliyah are Sephardi traditional Jews, I think they will be reluctant to be assisted by an organization that is funded by evangelical Christians,” said Michael Jankelowitz, a former spokesman for JAFI and a longtime observer of Jewish organizational life.

Without France, the Fellowship would have little room to operate in Europe. Britain is already covered by Nefesh B’Nefesh, and Germany, the other European country with a large Jewish population, is made up primarily of Jews who came there from the FSU and their children. Having already chosen immigration to Germany rather than to Israel, they are seen as unlikely to take an interest in aliyah now.

Meanwhile, JAFI has responded to IFCJ’s announcement by emphasizing its primacy in the field of aliyah.

“The Jewish Agency for Israel is the body tasked with bringing new immigrants to Israel,” JAFI spokesman Avi Mayer stressed in a terse official response to the Fellowship’s move. “As part of its activities, The Jewish Agency works with various government ministries and other organizations interested in aiding its efforts to bring immigrants to the Jewish state.”

Both JAFI and the Fellowship promised to cooperate in their work with potential immigrants, but sources involved in the aliyah process said the new competition could drag the Israeli government into the debate and force it to take sides.

Currently, potential immigrants in the Former Soviet Union must go to the Israeli Embassy, where Nativ, a government agency, determines their eligibility based on each individual’s ability to prove his or her Jewish ancestry. Now, Nativ representatives will also have to decide where to refer the potential immigrants once their eligibility is approved: to JAFI, as they’ve done for all comers in the past, or to the new operation, funded by pro-Israel Christians.