On Alfred Hitchcock’s 120th Birthday — His Most Secretly Jewish Film 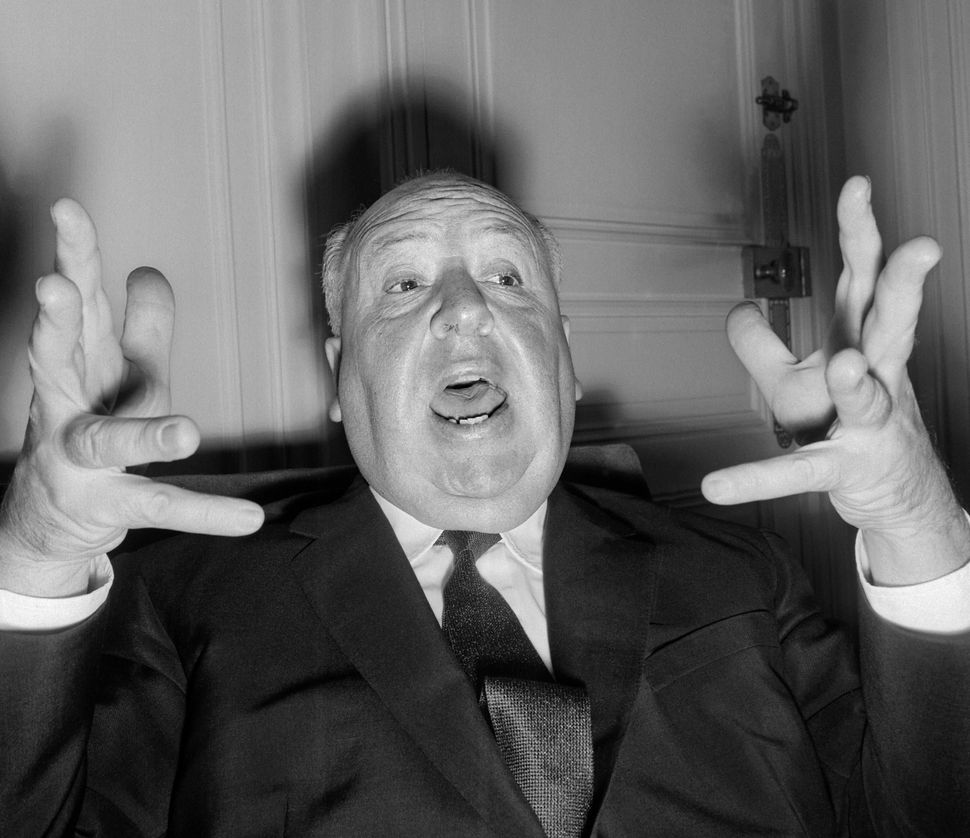 The character Cary Grant plays in “North by Northwest” is a familiar one in Alfred Hitchcock’s films: An innocent everyman tangled in a web of intrigue that may wind up costing him his life.

But the name of this character is different than the typical ones in Hitchcock’s work. He’s not L.B. Jeffries or John Jones or Benjamin McKenna or John Ballantyne. This time, his name is Kaplan.

And, unlike those other names in Hitchcock films where handsome WASPy actors play generically WASPy heroes, the name Kaplan clearly identifies its bearer as Jewish. Kaplan as in a descendant of the Kohanim. Kaplan as in Ira Kaplan of Yo La Tengo. “K as in Knife, A as in Aardvark, P as in Pneumonia, L as in Luscious, A as in Aardvark again, and N as in Newel Post,” as Elaine May famously said.

Could Cary Grant, né Archibald Leach, have been playing the only identifiably Jewish character in Hitchcock’s oeuvre?

Well, no, not exactly.

No, because George Kaplan is just the man Roger O. Thornhill is mistaken for. And Kaplan doesn’t actually exist. He’s as much of a cipher as the middle initial O in Roger Thornhill’s name, which “stands for nothing,” we are told.

Kaplan is an invention of U.S. intelligence designed to thwart a cabal of international criminals led by Philip Vandamm (James Mason), whose surname seems a little too close to Van Daan to have been chosen entirely at random.

Van Daan as in the Van Daans who hid with the Frank family in the dramatized version of “The Diary of Anne Frank,” the film of which was released in 1959 just four months before “North by Northwest.”

And then there’s that crop duster scene. You know the one. Maybe you’ve even seen the scene in “Arizona Dream,” where Vincent Gallo acts it out as part of a talent show.

“George Kaplan” is standing at the side of the road when a plane comes seemingly out of nowhere, chases him into the cornfields, and ultimately crashes into a Magnum Oil truck. And what’s the headline of the Chicago Sun-Times that describes the event?

Though in 1959 the term “Holocaust” was perhaps not used as frequently to describe the Nazi genocide, it was already a part of common parlance. And Hitchcock himself had already made a film about the Holocaust — a 1945 documentary that followed Allied soldiers as they entered Nazi death camps. The footage that was shot remained largely unseen until the 2015 HBO documentary “Night Must Fall.”

The answer may lie in the contributions of Ernest Lehman, Hitchcock’s screenwriter on “North by Northwest.”

Lehman, who would go on to write the screenplays for “West Side Story” and “The Sound of Music” and would adapt and direct the film of Philip Roth’s “Portnoy’s Complaint,” has been frequently quoted as saying in reference to “North by Northwest,” “I wanted to make the Hitchcock picture to end all Hitchcock pictures.” So, he wrote a screenplay about a New York ad executive who is confused with a CIA-creation with the very Jewish name of George Rosen — the name was later changed to “Kaplan.”

Rosen/Kaplan is plied with alcohol at a posh estate; put behind the wheel of an automobile and left to die; questioned by a police officer with the noticeably German sounding name Emil Klinger; he is framed for a murder at the United Nations; escapes on a train via the assistance of the very non-Jewish double-or-maybe-triple agent Eve Kendall (Eva Marie Saint); all of which culminates in the final chase scene atop Mt. Rushmore where the stony visages of four presidents look on.

None of this is overtly Jewish, except maybe it all is. For, the Kafkaesque world Hitchcock and Lehman created, one in which an innocent man is mistaken for some sort of operative or criminal and subjected to all manner of byzantine tortures only because his name is Rosen or Kaplan, would have seemed all too familiar to Jewish audiences. (Remember, this was 1959, and in the same month that “North by Northwest” was released, Leon Uris’s “Exodus” was the bestselling novel in America.) As careful observers of history, Lehman and Hitchcock were both well aware of what happened to people with names like Kaplan.

And back to that final sequence — the one where Kaplan and Eve Kendall are saved in Rapid City, South Dakota, then embrace on a train before that train penetrates a tunnel. Did Hitchcock end the film there just because, as he said, he had always wanted to shoot a chase scene on Mt. Rushmore? Or was something deeper going on?

Our hero survives his trials and persecution, wins the approval of George Washington, Thomas Jefferson, Theodore Roosevelt and Abraham Lincoln and the heart of a blonde-haired, blue-eyed, All-American woman. And, in the end, it no longer matters whether his name is Thornhill or Rosen or Kaplan. Because, ultimately, “North by Northwest” is the greatest film ever made about Jewish assimilation into America.

Saul Allerton is a New York-based journalist and critic.

On Alfred Hitchcock’s 120th Birthday — His Most Secretly Jewish Film