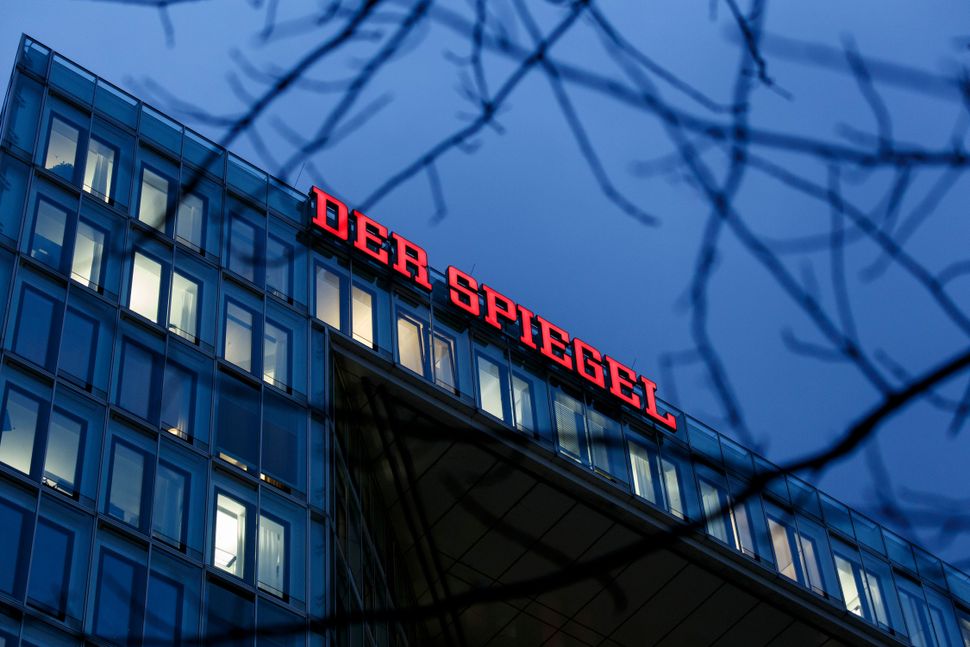 Critics ranging from the U.S. ambassador to Germany to the Central Council of Jews in Germany have accused the German news magazine Der Spiegel of printing an anti-Semitic cover for an issue about the country’s Jewish community.

The cover for the August historical issue, titled “Jewish Life in Germany: The unknown World next door,” shows two eastern European Hasidic Jews in conversation. Many noted that the bulk of German Jews – both now and in the past – did not fit this depiction, and that the title suggested an alien quality of the country’s Jewry.

“With the title picture, The Spiegel unfortunately uses stereotypes of Jews,” the Central Council wrote on Twitter on August 2 per The Jerusalem Post’s translation. “Therefore, the question arises as to what The Spiegel intends with this photo selection and title. To portray Jews as foreign or exotic promotes antisemitic [sic] stereotypes.”

“So that is how we Jews look in Germany?” Schneider wrote in a Tweet translated by The Jerusalem Post. “Jews in Germany did not look that way in the last 200 years… this is probably the classic ‘genre photo’ in editorial departments when it comes to articles about Jews.”

Schneider added that “if one were to show us as ‘completely normal,’ then the majority of society would probably have a problem… ‘They are like us!’”

Richard Grenell, the U.S. ambassador to Germany, condemned the cover as well, telling The Jerusalem Post on August 4 he was “not surprised that [Der Spiegel] are continuing to be antisemitic [sic] and anti-American.”

The “anti-American” bias that Grenell alleged, as The Jerusalem Post reported, appears to refer to a recent scandal surrounding Der Spiegel’s former reporter Claas Relotius, who allegedly fabricated several anti-American news stories and admitted to journalistic fraud. Grenell complained to Der Spiegel about Relotius’s purported slant in a letter to the editors last December, before Der Spiegel admitted to the fraudulent reporting and fired Relotius.

Der Spiegel defended its choice of cover in a statement to the Jerusalem Post. “The cover of issue [sic] of Jewish Life in Germany shows a historical street scene from 1928 in front of a lending library in Berlin’s Grenadierstraße,” Der Spiegel spokesperson Anja zum Hingst wrote in an email. “We chose the picture because it is an authentic scene from the Berlin Scheunenviertel; the picture shows public, visible Jewish life, as existed in Germany before the Holocaust.”

Zum Hingst added that “[Berlin] was considered at that time the center of Jewish culture in Europe. Threads from East and West wove together, and here developed a Jewish everyday culture with bookstores, theaters and clubs, which was unique in Europe, and contributed a significant part to making Berlin the Roaring City of the [20th century].”

In July, Josef Schuster, head of the Central Council for Jews in Germany, derided Der Spiegel for an article about a resolution presented in German parliament that declared the Boycott, Divestment and Sanctions movement as anti-Semitic. As The Times of Israel reported, Schuster said the story, which suggested that two small, pro-Israel organizations, WereInitiative and Naffo, lobbied aggressively to pass the resolution, “clearly use[d] anti-Semitic cliches.”

Der Spiegel defended the story, writing in an editor’s note that it did not “paint the image of a ‘Jewish lobby.’”