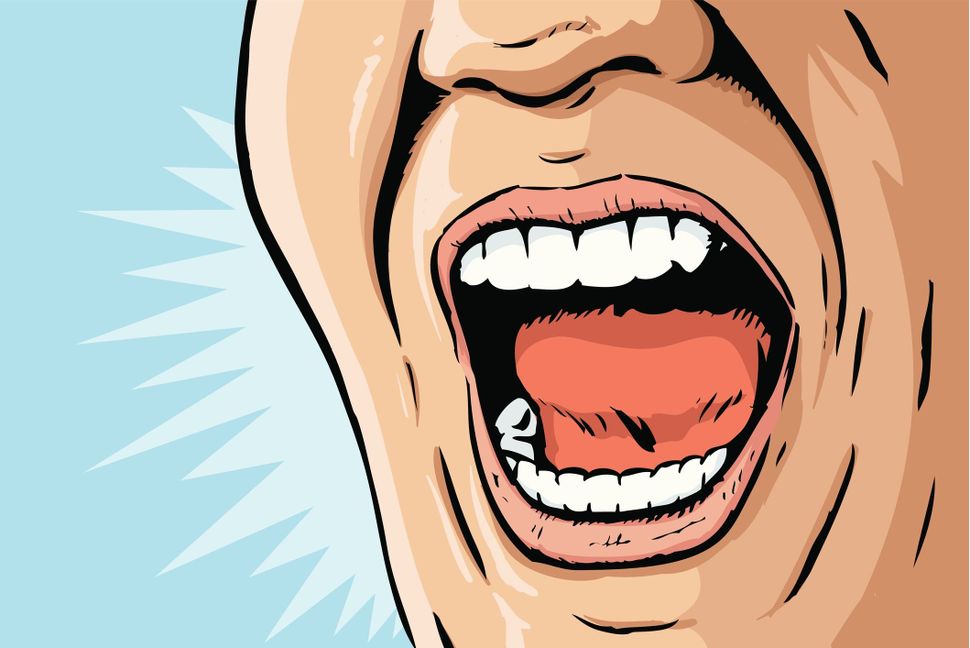 Threaten a nice man, and he may attempt to revoke part of your identity Image by iStock

“F—k you, c—t,” a man emailed me in response to an article I wrote about dating. “I hope you get over 30 very soon, lose your mediocre looks, and end up a childless feminist cat lady cause you don’t deserve to replicate and Am Yisrael and all humanity will be better off without your kind.”

I had a happy childhood with attentive parents, so I can’t explain why I enjoy receiving even this kind of email. I imagine the man’s breath catching as he searches my name on Google images, scrolling halfway down the page to my picture, and pumping his fist, shouting, “Mediocre!!!”

The message didn’t reveal the writer’s name or workplace. “And there’s nothing you can do to me,” he concluded his email. “You can’t get me fired, you can’t boycott me, you can’t hurt me, you can’t shame me. So f—k you.”

Around the same time, another man wrote to me, a powerful man in the progressive Jewish community. He, too, contacted me about writing of mine concerning beauty and sexuality. His article-length email was well reasoned and used enough 50-cent words to fill a JNF blue box.

“We do have a collective dignity,” he wrote, detailing how my writing had “compromised” that dignity.

“I don’t think it’s becoming of you,” he concluded.

“What do you think would become me?” I wondered. How may I beautify myself for you? How would you have me be?

The answer? Well behaved. This answer is identical for Bad Men who hide behind pseudonyms and call you a c—t, and Nice Men who have email signatures longer than Keats odes and want to help you be more becoming.

As a non-famous Jewish woman writer in the digital space, I have the odd privilege of shouting my opinions out of earshot of most internet trolls. But because of the intimacy of the Jewish community, trolls can surface close at hand, like drops of condensation that bud under cling wrap at a potluck, turning everything unpleasantly moist.

Men who seek to engage writers pen thoughtful messages. Men who feel that a (usually female) writer is challenging the status quo issue threats. I see famous female writers, especially writers of color, whose lives online involve ceaseless personal insults, punctuated by death threats. My trolls are rarer and comparatively pleasant. The three types of threats I receive from men are — “You aren’t really a Jew,” “You will never be loved,” and an odd one that sounds something like “You malignant slut! I want to spank you, throw you in a garbage disposal, press ‘on,’ and never think about it again!”

I say men because 95% of correspondence I receive from readers, loving or lacerating, comes from men.

I interviewed a man at a Jewish singles event but didn’t use his quote. “I was hoping to get a shout-out in the article,” he wrote, finding me on social media. “I guess I wasn’t as interesting as I thought I was.” He went on, seemingly unable to help himself, like a condiment oozing over the edge of a bottle that’s been squeezed too hard. “You, like everyone else, went to the event in search of a connection that’ll ease that sense of existential loneliness you think will be filled by finding a partner,” he wrote. “And bc u didn’t find it, you lashed out.” There was something funny in the transparency of the writer’s personal despair. Same with his assertion that his grandparents hadn’t “sacrificed everything” just for a Jewish publication to run an article like this!! It was also creepy — I bruised his ego, he went straight for my selfhood.

So did a powerful Reform rabbi, who contacted me concerning one of my articles about dating to inform me that if I did not apologize directly to him for the sexual nature of my piece, I would risk being ostracized from “the Covenant.”

“What covenant?” I asked, surprised to be having this conversation with a human man instead of, for example, a pillar of smoke.

“The holy covenant,” he said, urging me to think over his offer carefully.

It’s quite a presumption to imagine yourself the gatekeeper between a smalltime dating columnist and the covenant at Sinai. But what can you do when a woman troubles you, except marshal what power you have to bring her to heel? If you’re a young man, you can curse her with loneliness. If you’re a rabbi, you can tell her that if she doesn’t please you, you will revoke her identity. Or, go deeper.

One rainy day last year, I published a list of the “Sexiest Jewish Intellectuals Alive.”

“What a time to be in journalism!” I thought, inserting a GIF beneath a rabbi’s headshot. That afternoon, several people contacted me to share that a Jewish leader was mocking the article on his Facebook page. I read the public conversation, where a group of interesting Jews evaluated my writing.

“This list is the journalistic equivalent of a fart joke,” one powerful, older Jewish male leader wrote. “You can make one without being a horrible person, and sometimes they are funny, but mostly they are gross and you feel some shame after having allowed that to go from your brain straight into the public discourse.” He added, “And if you do it too often, it can start to affect your reputation.” The original poster agreed. “I think it affects your reputation in your own mind as well, and your own sense of whether you have good judgment.”

A mere eleven hours later, I had finally composed a response. I knew I should ignore it, but I felt moved to correct the perception that while not a horrible person, I (writing genre: farts) had shamed the public discourse and bid farewell to my reputation.

“I deeply believe in this list!” I wrote. It successfully riffed on a popular medium, celebrating cerebral Jewish figures while acknowledging the draw of the corporeal! Plus, why are you saying such mean things about me publicly? Don’t you know my mom can read this?

“I” — gasp — “do respect myself!” I heaved, guzzling snot as my sister read over my email draft. “I jus — I jus like writing lists!”

She stared at me.

“Jenny,” she said. “These men are pissed because you didn’t call them sexy.”

Men who feel threatened by ideas issue threats. The thought of not just moving over to make room at the table but actually stepping back entirely to give someone else a turn angers some men to the point that it unmasks them.

Watching it happen, I feel a sense of exhilaration, like in a movie when you discover that the good guy is working for the bad guys. What a relief to see that behind the firm handshakes and RBG fandom and loud support for #MeToo is pure petulance. Petulance that insists: I must have the status quo. I must retain control.

Like the refreshing sweep of air that precedes a slap to the face, it’s briefly gratifying to make a connection between powerful men who promise to lead us someplace better and the place where we perpetually find ourselves.

It’s a privilege and a freaky joy to make nice men angry. It’s luxurious to be the hero in this strange, blind-item story I’m telling about myself — the dainty Jewess who stirs genteel men into a violent frenzy, then faces down their bitty screaming mob through her Mac screen. Aside from her white skin, privileged background and eponymous column, she’s a real underdog!

Some time ago, a friend of mine submitted an article to a Jewish publication that is not the Forward; she received a lengthy rejection letter from an editor and showed it to me, asking if this was typical. Her piece, the older male editor wrote to her, was not a real article. It was full of emotions and empty of facts. It was self-promotional, illogical and breathless. Her reference to refugees was emotionally manipulative. Her very thesis was undermining to the possibility of a holy Jewish community. It was disrespectful and anecdotal, and she ought to read more history books.

The letter was so familiar, like a Bingo board of the favorite themes of my male detractors. Something in her writing had clearly triggered the editor’s insecurities such that he felt moved to make her feel just as bad.

Also, his letter almost could have been written by me. I don’t write to young Jews volunteering their time, and call them overly emotional nitwits. But I felt a kinship with the editor, because I know exactly the feelings of nobility that rose in him as he deployed his words on a less powerful enemy. He probably still saw himself as a young columnist, slicing through haters with the sharp prow of his prose, instead of what he really was: a raving old man shouting down new ideas.

No matter how tiny your morsel of power is, it’s so delicious. That feeling is so much more eroding to the soul than writing a sexy list could ever be.

This article was published in the final print issue of the Forward, the last in 121 years. The move to digital represents a powerful opportunity to use words without limit, and an equal possibility of over stretching them. An infinite expanse, to fill as we see fit. I’ll try to use my piece of it wisely.

The internet allows each person a tiny shred of what powerful men have. In pre-internet days, Carly Simon used her power to sing about male vanity. When I write, I think, often, of one of her most famous inheritors, who sang, I’ve got a blank space, baby. And — one day — I’ll write your name.