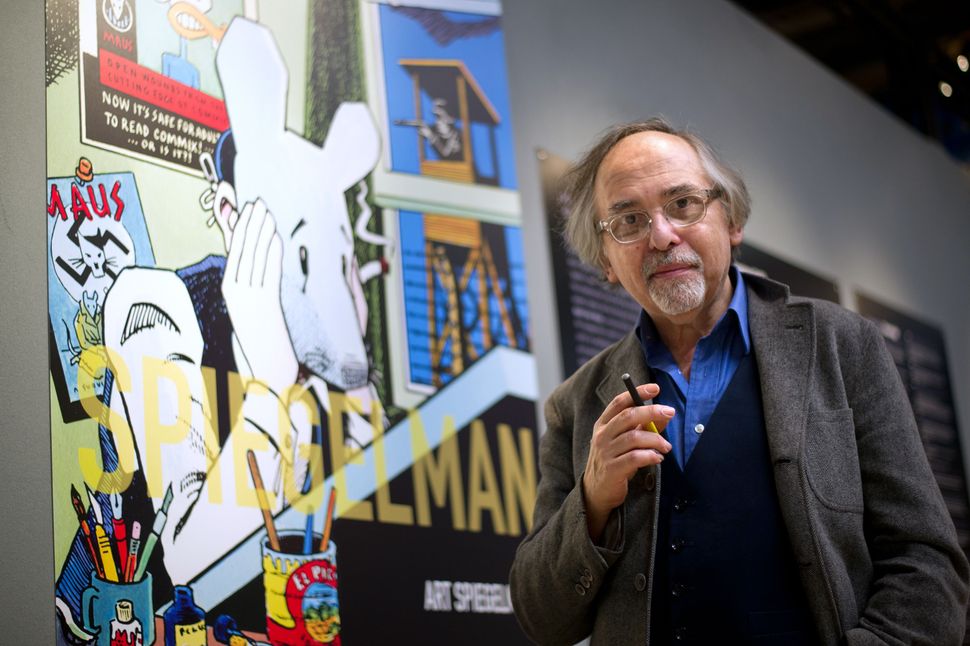 For the Pulitzer Prize-winning cartoonist Art Spiegelman, comics — for all their pulpy origins — are a political art form.

Spiegelman, author of the serialized graphic novel “Maus,” is something of an elder statesman of the form. He’s also a scholar of its history. So when the Folio Society, a London publisher of glossy illustrated tomes, approached him to write the introduction for its collection of archival Marvel comics “Marvel: The Golden Age 1939-1949,” co-published with Marvel, he agreed — despite noting that he’s never been particularly enamored of the superhero genre.

The Golden Age of Marvel was defined in part by a consistent ideology, one that championed and clarified American values in the beings of modern gods, crafted by science or augmented by myth and real enough to respond to current events. Marvel never lost that spirit of engagement. But when Spiegelman attempted to draw on that history, he was met with resistance. Marvel, he was informed, no longer wanted to play politics. What happened next is the subject of an August 17 essay Spiegelman published in The Guardian.

In Spiegelman’s essay, which contains much of the material he originally wrote for his introduction, the comic book writer, whose “Maus” recounted his father’s tale of survival during the Holocaust, observes a clear connection between Marvel’s early years and his own interests. As he notes, the overwhelmingly Jewish creators at Marvel shaped the politics of comic books around their concerns over the rise of fascism in Europe. Spiegelman ran into trouble, however, when he indicated a parallel between the atmosphere in which Marvel’s early innovators worked and today’s political environment. According to his Guardian essay, Folio insisted that he remove or alter the following sentence: “In today’s all too real world, Captain America’s most nefarious villain, the Red Skull, is alive on screen and an Orange Skull haunts America.”

Spiegelman says his editor reluctantly told him the passage, which compares Donald Trump to Cap’s Nazi nemesis the Red Skull, had to be changed, as Marvel Comics was striving to remain “apolitical.”

“I didn’t think of myself as especially political compared with some of my fellow travelers,” Spiegelman wrote in the Guardian. “[B]ut when asked to kill a relatively anodyne reference to an Orange Skull I realised that perhaps it had been irresponsible to be playful about the dire existential threat we now live with, and I withdrew my introduction.”

Given his essay’s content (and that of the collection itself), the editor’s note is particularly ironic. Marvel and DC Comics’ ethos emerged from a collective of recent immigrants “who were especially attuned to the rise of virulent antisemitism in Germany,” Spiegelman writes, and who “created the American Übermenschen who fought for a nation that would at least nominally welcome ‘your tired, your poor, your huddled masses yearning to breathe free.’” There was perhaps no greater American symbol than Marvel’s flagship hero, Captain America, who was revealed to the world in an explicitly political fashion.

While much of the country was divided on whether to enter World War II, Spiegelman contends, writer-cartoonists Joe Simon and Jack Kirby debuted the genetically-altered Brooklyn-born warrior Steve Rogers, “a hero dressed like an American flag with giant biceps and abs of steel [who]… burst into Nazi headquarters and knocked Hitler over with a haymaker to the jaw.” That March 1941 cover depicting Cap decking Hitler led, as Spiegelman recounts, to death threats from members of the German American Bund and American isolationists to Marvel’s then-publisher, Martin Goodman.

The Golden Age and its preoccupation with fascism eventually ended, giving way to comic books’ Silver Age in the 1950s. While the book Spiegelman was to introduce only covers Marvel’s output through 1949, the publisher’s progressive politics remained prominent, evolving with the times and, eventually, moving on to other Jewish issues with a more ambitious agenda of inclusion and political examination.

Under Stan Lee’s editorship, Marvel ran regular “Stan’s Soapbox” editorials, in which Lee voiced support for civil rights and attacked bigotry. Under Lee, Marvel also introduced a coterie of heroes of color, including Luke Cage and Black Panther. The early X-Men comics have been read as a direct allegory for the philosophy of Martin Luther King, as presented in the figure of Professor Charles Xavier, and of Malcolm X, through Xavier’s foil and frenemy Magneto. Recent years have seen queer characters introduced to the Marvel universe, and the film treatments of “Black Panther” and “Captain Marvel” have been feted for pushing for more diverse representation.

But Spiegelman’s conflict with Folio calls to mind another political controversy touching Marvel: the May 2016 publication of the first issue of “Captain America: Steve Rogers,” in which the title character was unmasked a sleeper agent for Hydra, the fictional evil organization affiliated with the Nazis (and led by Red Skull) that, for years, had been the star-spangled shield-thrower’s main antagonist. Many condemned this decision as it, effectively, turned the beloved American icon into his own antithesis; the issue was particularly jarring for presenting this reveal in a final, full-page panel of the hero saying “Hail Hydra.”

The comic, which was part of a larger run, previewed a Captain America who uncomfortably reflected traits of a modern, disaffected America: A Cap who sees no dissonance between serving as an emblem of the United States and its values while holding close to a white nationalist dogma. That dogma is outlined early in the issue by none other than Red Skull. “Your entire culture is under siege,” the crimson-pated baddie tells a group of followers. “The principles your country was founded upon lost in the name of ‘Tolerance.’ Your religion, your beliefs, your sense of community — all tossed aside like trash. And you cannot even speak out against it, lest you be called a bigot!”

Spiegelman is not the first to draw a comparison between Trump and Red Skull. Those talking points, printed in Red Skull’s speech bubbles in the late stages of Donald Trump’s campaign for the 2016 Republican presidential nomination, were not dusted-off relics of the past, but rather slogans spouted at campaign stops. The biggest difference between then and now, it would seem, is that Trump is now president and Spiegelman was a bit more direct than Marvel itself.

“I learned that the billionaire chairman and former CEO of Marvel Entertainment, Isaac ‘Ike’ Perlmutter, is a longtime friend of Donald Trump’s, an unofficial and influential adviser and a member of the president’s elite Mar-a-Lago club in Palm Beach, Florida,” Spiegelman writes at the end of his essay. Perlmutter and his wife, Laura, Spiegelman adds, each donated the maximum allowed campaign contribution to “‘the Orange Skull’s ‘Trump Victory Joint Fundraising Committee.’”

Whatever one makes of that publicly-available information — and its potential effect on the company’s internal philosophy — it’s certainly too late in Marvel’s history to start dodging politics. It never did before.