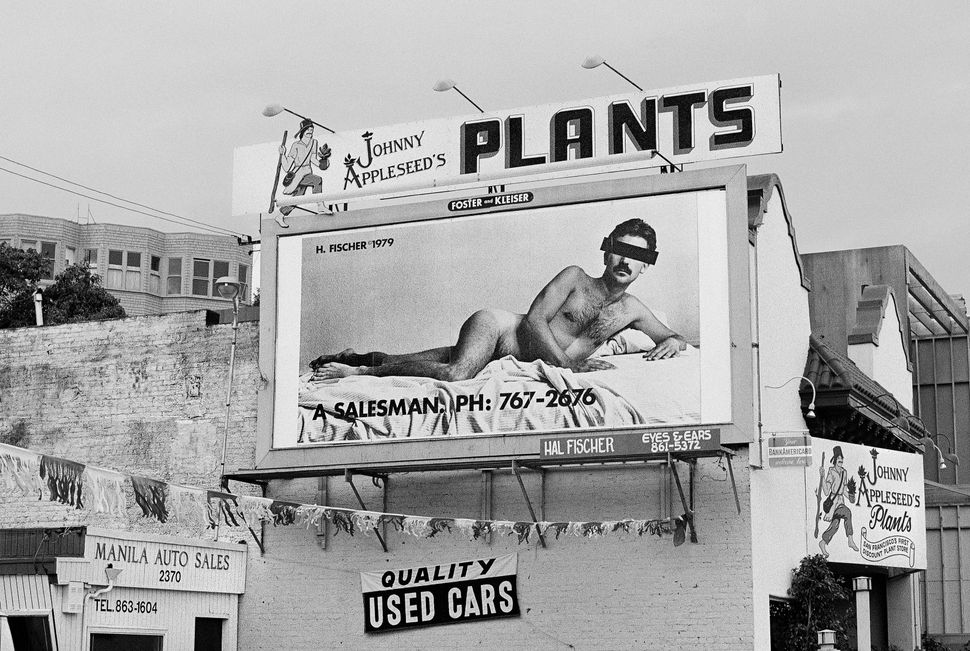 The photographer and critic Hal Fischer worked on the front lines of history, recording gay life in San Francisco in the 1970s in the period between the Stonewall riots and the AIDS crisis. He captured the era’s vibrancy, pleasures and hazards through images of his ex-boyfriends, street scenes and idiosyncratic menswear. Now, over 40 years after Fischer arrived in San Francisco after earning a degree at the University of Illinois at Urbana-Champaign, his three portfolios of radical conceptual photographs — the entirety of his artistic output — are making a homecoming.

The effort to return Fischer’s work to his alma mater’s Krannert Art Museum was funded by his former professor Robert Carringer, who taught English. The link between Carringer and Fischer, despite their different fields, makes sense; examining Fischer’s photos — or reading his criticism — reveals an interdisciplinary-minded artist. 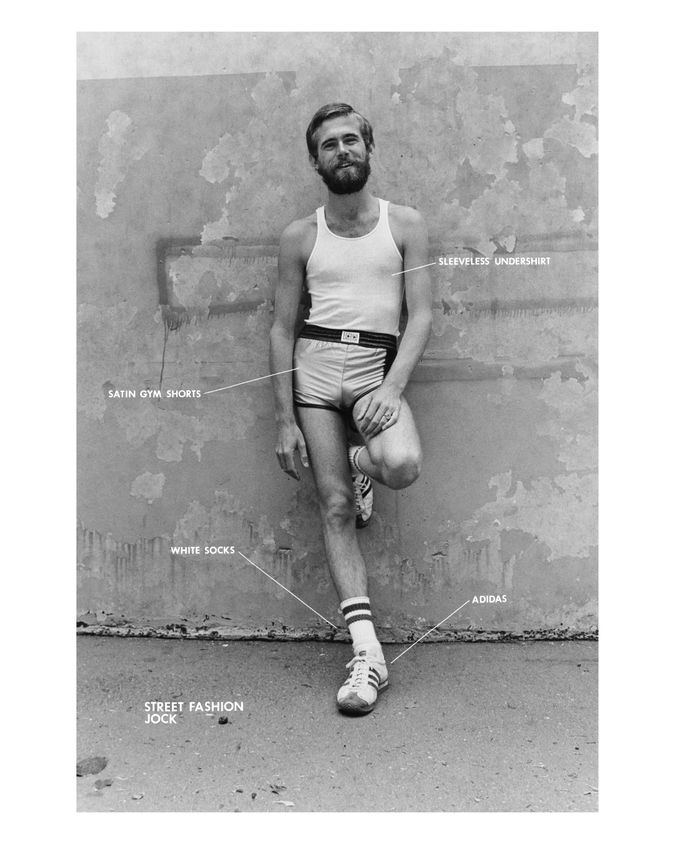 Fischer engaged repeatedly, and often playfully, with thinkers like Roland Barthes and Claude Lévi-Strauss in his art. His interest in their writings may be most apparent in his 1977 portfolio, “Gay Semiotics: A Photographic Study of Visual Coding Among Homosexual Men.” In that portfolio, Fischer accompanied his images with text explaining, diagram-style, the significance of accessories for the cruising gay community. “He is taking up all of these conceptual explorations among his own community as a kind of auto-ethnography,” Amy Powell, the curator of modern and contemporary art at KAM, told the Forward over the phone. “It was important to read codes: of a certain color of handkerchief in a certain pocket or an earring in a certain place or certain devices — especially among the leather community.” 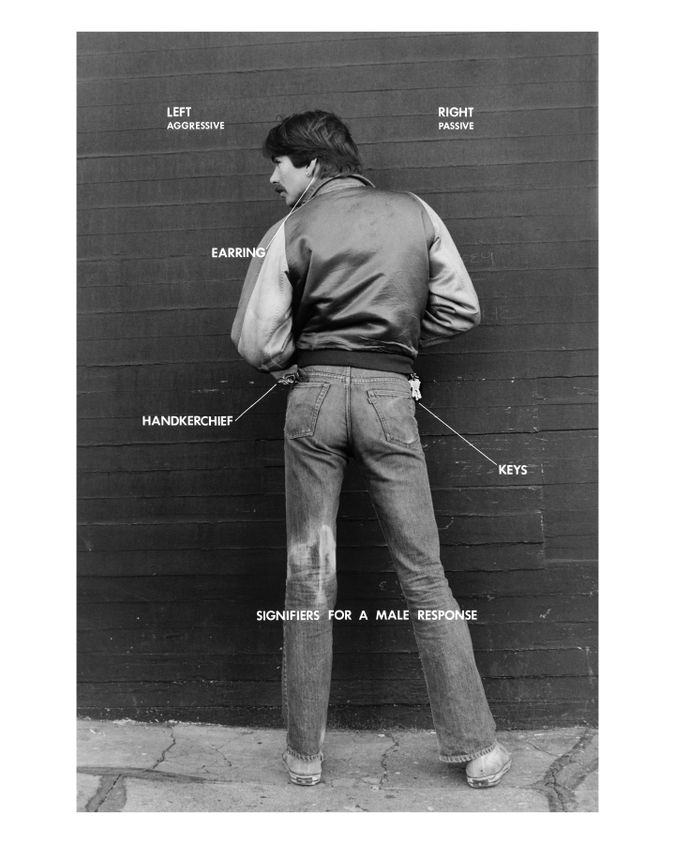 Hal Fischer, “Signifiers for a Male Response” from “Gay Semiotics: A Photographic Study of Visual Coding Among Homosexual Men,” 1977. Image by Courtesy of Krannert Art Museum

Powell said that in San Francisco, Fischer was involved in a community of conceptual photographers called the Photography and Language Group, committed to exploring new ways for the medium to communicate meaning. Fischer elected to extract different messages from still photos by marrying image and text.

Fischer only practiced photography in the 1970s, transitioning into museum consulting in the 1980s. But his work has recently received renewed attention thanks to a number of high-profile exhibitions, beginning with his inclusion in “Pacific Standard Time: Art in L.A. 1945-1980,” a collaborative exhibit between 60 southern California institutions that ran from 2011 to 2012. In 2018, “Gay Semiotics” received a solo show at the Museum of Modern Art. This year, for the 50th anniversary of the Stonewall riots, Fischer’s work was featured as part of “Art After Stonewall: 1969-1989” at the Leslie-Lohman Museum at New York University.

Powell said that her favorite Fischer acquisition is the portfolio “18th St. Near Castro,” which was displayed at Art Basel in Switzerland in June, marking a strong summer for the artist. The 24 photos in the collection, taken over 24 hours from a fixed point at a bus stop on 18th and Castro Street, reveal San Francisco’s urban life in all its diversity.

“You can see who was there to catch the bus, when the cruising starts, who is sunbathing,” Powell said. “There are all these resonances of class when certain workers come through. It is a document of 24 hours, but it’s also an indication of all these bigger issues happening at the time.” 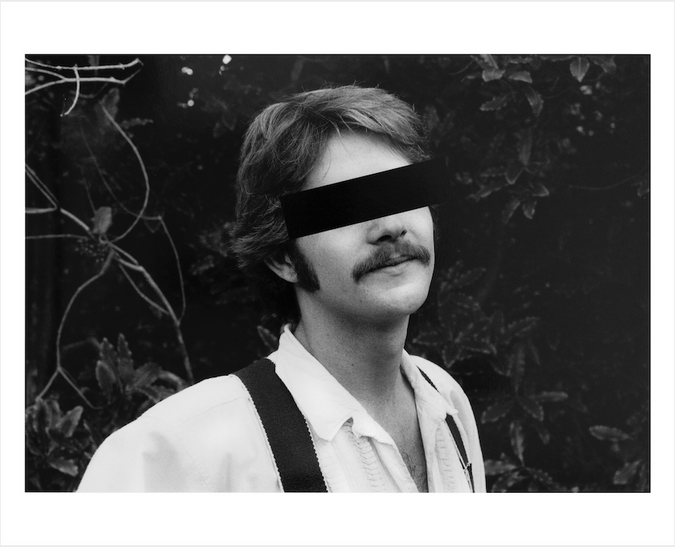 KAM will be showing Fischer’s portfolio, “Boy-Friends,” in which he created a taxonomy of the men he dated, as part of “Art Since 1948,” a long-term collection of the museum’s modern and contemporary holdings set to open August 29. On September 12, Fischer will be visiting to speak and receive a distinguished alumni award. An exhibition of his entire oeuvre is forthcoming.