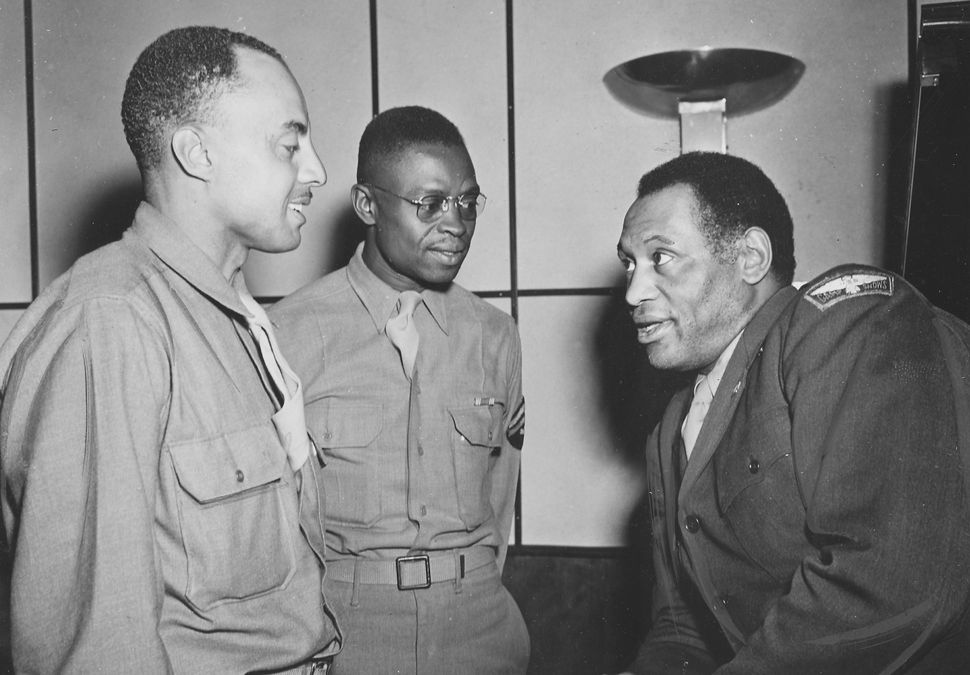 Paul Robeson with members of the Armed Forces in 1945. Image by Afro Newspaper/Gado/Getty Images

Editor’s Note: During the Peekskill riots, in late August, 1949, a violent KKK and fascist mob attacked attendees of a planned concert by Paul Robeson in Westchester County, New York. The violence spread outward, and a number of black and Jewish residents of New York City and Westchester were injured. The following is a translation of the Forverts’ coverage of the riots, lightly edited; it was originally published on August 29, 1949, with the headline “7 WOUNDED IN RIOT AT PAUL ROBESON CONCERT.”

At least seven people were wounded Saturday evening in a riot in Peekskill that took place on the occasion of a planned concert with the acclaimed black singer Paul Robeson. The concert was organized by the Harlem branch of the Civil Rights Congress.

The riot took place at the entrance to Lakeland Acres, a picnic locale where the concert was supposed to take place. The rioters set the stage and seats on fire, and the wounded were taken to Peekskill Hospital. According to the police, the wounded included a stabbing victim and an individual seriously beaten with a black-jack.

The riot took place after a war-veterans parade. The veteran’s parade was called upon to protest against the Paul Robeson performance. They were joined by another group, which set the fire. The veterans’ commander, Dan Zimmer ordered them to disperse, but they remained. Friends stopped Paul Robeson en route to Peekskill, and he never performed.

Robeson recently returned from a visit to Soviet Russia, after which he made a statement that members of the black American community should not go to war against Russia.

A total of 150 people attended the picnic; outside, where the riot took place, there were between 400 to 500 people. The picketers refused to let anyone enter or leave and when any attempt was made to enter they screamed: Communist!

Women were permitted to pass through; it was only men that the rioters handled rudely. Stones were thrown at cars, two cars were turned over and one driver was wounded. The state police arrived at 10 pm. Three of the protesters had mounted the stage and were demanded the orchestra musicians play “Yankee Doodle” and “The Star Spangled Banner.” The riot lasted until 11 pm.

Michael Simbolo, Labor Party candidate for Attorney General, and other locals had appealed to the police, saying they knew a riot was pending.

On August 28, a meeting on a Westchester estate took place to protest the riot. Paul Robeson wanted to sing at that meeting, but he instead called a press conference. He Robeson that the riot in Peekskill was part of a ‘campaign of terror’ across the country against progressive forces.

At the time of Robeson’s press conference, approximately 1,500 people had gathered in New York to protest the riot and demonstrate on the estate of Dr. Samuel Rozen, not far from Peekskill.