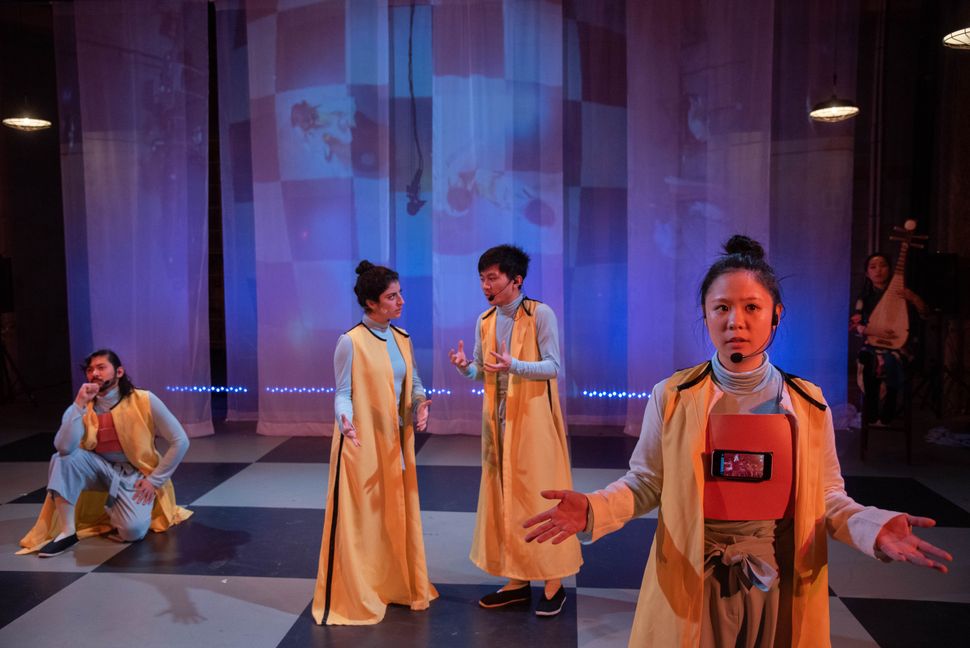 A scene from the workshop production of Meta-Phys Ed.’s “The Talmud.” Image by Jenny Sharp

In a dramatic episode in the Gemara, the part of the Talmud containing rabbinical commentary on the Mishnah, Rabbi Yohanan ben Zakkai is smuggled out of the walls of besieged Jerusalem in a coffin.

Once free of the city, the rabbi encounters the general Vespasian in a Roman camp and misidentifies him as “king.” Providence would have it that this gaffe would prove correct: As the rabbi and the general are speaking, a messenger arrives from Rome to inform Vespasian that the emperor has died, making him the presumptive ruler of Rome. This bit of “Macbeth”-like legend is, naturally, preceded by dense legal tractates on property law.

Over a millennia after this anecdote was first committed to parchment, Jesse Freedman, the artistic director of Meta-Phys Ed., a theater company that has produced everything from a Karaoke-inspired take on Euripides’s “Bacchae” to an “Awake & Sing” riff featuring zombies, was watching the South Korean martial arts film “Canton Viper” (1983) at the 2014 Old School Kung Fu Festival at Anthology Film Archives. Freedman saw a scene where a character hid in a coffin from would-be murderers and was reminded of the Talmud. The thought stayed with him.

Often through the years, Freedman would read the Talmud and be reminded of kung fu films, then, on returning to kung fu films, he would be reminded of the Talmud. In January, this “circular spiral” of intertextual research produced a workshop of an original kung fu-inspired play, “The Talmud,” which draws its text from a small section of the rabbinic text concerning a time of war and strife in Judea and its effects on – among other legal matters – the sale of land. A new production of the show will premiere September 12 at Target Margin’s Doxsee Theater in Sunset Park, Brooklyn.

“We’re not editing out the boring stuff,” Freedman told the Forward. “There is an approach to staging the Talmud where you just take the stories. I think that’s a great idea, but I was interested in very specifically the stories and the not-stories: The laws.”

The project, which bridges the cultural traditions of 20th century Chinese fighting flicks and fifth century Jewish biblical commentary, seems ill-matched. But on further reflection, it doesn’t take a Talmudic level of concentration to see how the two forms relate to one another.

“The Talmud and Chinese martial arts films are documents of oral traditions that have been redacted and retold over many centuries, passed down from master to disciple, teacher to student.” Freedman said. “Sometimes those traditions have opposing traditions that are challenging them – the schools of Hillel and Shammai. There are also lineages within martial arts traditions that challenge each other.”

Kung fu films, though clearly newer than the Babylonian Talmud, often depict a period of the ancient past, complete with legendary heroes who maintain their traditions in the face of invading powers wishing to assimilate or destroy their culture.

While “Canton Viper” may have featured a scene where a character hides in a coffin, the cast of “The Talmud” has been studying another film, “Shaolin Abbot” (1979), during rehearsals for ben Zakkai’s escape sequence. In that film, a Shaolin monk named Chi San is carried out of the city gates in a coffin as his monastery is being destroyed. Like his fellow coffin stowaway, Rabbi ben Zakkai, who would transfer the rabbinic community from Jerusalem to Yavne, Chi San rebuilds his temple elsewhere. For both men, and for both traditions, the role of the academy – be it a Yeshiva or a Shaolin temple – are central to the narrative. It is these backdrops that serve as a place of battle, either verbal or physical.

In a skylight- and fluorescent-lit rehearsal space in an industrial stretch of Sunset Park, a landowner and the man who bought her field lock eyes as a judgment is declared.

“The Gemara returns to the Mishnah,” reads Eli M. Schoenfeld, a cast member who studied at a yeshiva near Israel’s Mt. Gilboa, “Which states: If one first purchased land from a Sicarius, and afterward returned and purchased the same field from the prior landowner, so that he will be considered the legal owner of the field, his purchase is void.”

Off to the side, the previous landowner – played by Abrielle Kuo – holds her ground, as her challenger, Jae Woo, circles her. Upon hearing the judgment, he flees to stage left, having lost the round. These bouts will repeat with different variables, each yielding different winners. When the set is constructed and the production moves downstairs to the Doxsee, the gray tile of the rehearsal room floor will give way to a checkered stage that resembles a chess board.

These legal battles may all be a bit confusing to lay people, and for this reason, the cast and Freedman, in between fits of movement – leaping, pirouetting, popping and locking and pantomiming punches and kicks — engage in a kind of exegetical table read of the script. In performance, the dizzying legalese attains a kind of hypnotic quality when paired with choreography. Declaimed in fourth-wall-busting speeches, the text also, by a kind of alchemy, starts to sound like the stilted English dubbing of a kung fu film right down to a portentous prologue: “The law of Sicaraii did not apply in Judea in the time that people were being killed in the war.”

But “The Talmud,” despite its advertised connection to kung fu films, does not employ traditional martial arts, even in the handful of battle scenes featuring invading Roman armies. This was a political and logistical choice for Freedman, who was leery of appropriating another culture and skeptical he could do justice to a practice that fighters spend many years perfecting. Instead, the play involves sequences akin to modern dance and hip hop, all being choreographed anew for a mostly-new four member cast (actor Lucie Allouche is returning, bringing with her some dervish-like spins.)

The “fights” are referred to as duets and trios and includes can-can leaps and jabs of an index finger deployed at some distance from an opponent. That finger-pointing, Freedman says, is a nod to the atmosphere of Yeshivot, in which Torah scholars might raise their hands to interject. Freedman observed a variation of this type of body language in a YouTube clip of Tibetan monks debating with formalized gestures.

Neither a Buddhist monastery or a Yeshiva have much in the way of break dancing, but two of the cast members have hip hop dance training and put it to good use. Thanks to the Wu-Tang Clan, hip hop is yet another window into the world of kung fu. Freedman thinks there’s some Talmud there too.

“The structure of hip hop is about these rap battles, it’s about shakla vetarya, give and take, call and response and so is the structure of the Talmud,” Freedman said.

“The Talmud” doesn’t always leave an audience member feeling like they crammed for the Tanakhic equivalent of the LSAT’s. As in a kung fu film, the balletics and the dense mythology are peppered with just enough of a story to keep momentum and interest going. The legends you may remember from Jewish day school —Nero firing his arrows and having them land near Jerusalem, Titus profaning the Temple, Bar Kamtza being slighted at a banquet — all figure into the company’s telling. Most of the proceedings will be underscored by live pipa music from musician Lu Liu.

The music, by Liu and composer Avi Amon lend a filmic quality to the presentation, but what really draws out the project’s kung fu movie pedigree is a live feed of the cast projected onto the set from iPhones affixed to an actor’s breastplate – a visual reference to the high priests of Israel, the Kohen Gadol, and their bejeweled chest pieces. The clever costume design reflects a happy happenstance that reveals yet another resonance between the world of Talmud and that of kung fu.

Freedman and his regular collaborator, costume designer Karen Boyer, were wary not to play into orientalism in their costuming. They settled, ultimately, on the traditional dress of the Sasanians, the people of the last pre-Islamic Persian empire, which reflects the time and place when the Babylonian Talmud was redacted.

“What we found out was in that period of history, most people wore the same thing,” Freedman notes, meaning that, while the robes and flowing pants might suggest the uniforms of Chinese kung fu period films, they are period accurate for the Talmud’s editors. They also move and sway well during some of the cast’s larger flourishes.

What feeds these feats of movement? The answers paper the rehearsal room walls on large flip board sheets: Donnie Yang, Bruce Lee, Jet Li. Also, “Kung Fu Hustle” and “Crouching Tiger Hidden Dragon.” Genre, tradition, the schools of Shaolin and Wing Chun. The old and the new convene in conversation, just as rabbis reference and critique the judgments of their wise forebears.

The play ends, naturally, with a debate surrounding this wisdom, as the company challenge the assertion that between the time of Moses and the days of Rabbi Judah the Prince, who compiled the Mishnah, there was no single person living who matched their greatness in Torah and secular matters. What about Joshua, Elazar or Pinehas?

One can imagine, or has perhaps been a party to, the same conversation about kung fu. Who was greatest in both martial arts and star power: Bruce Lee, Jet Li, Jackie Chan, Donnie Yang? Only the names have changed.