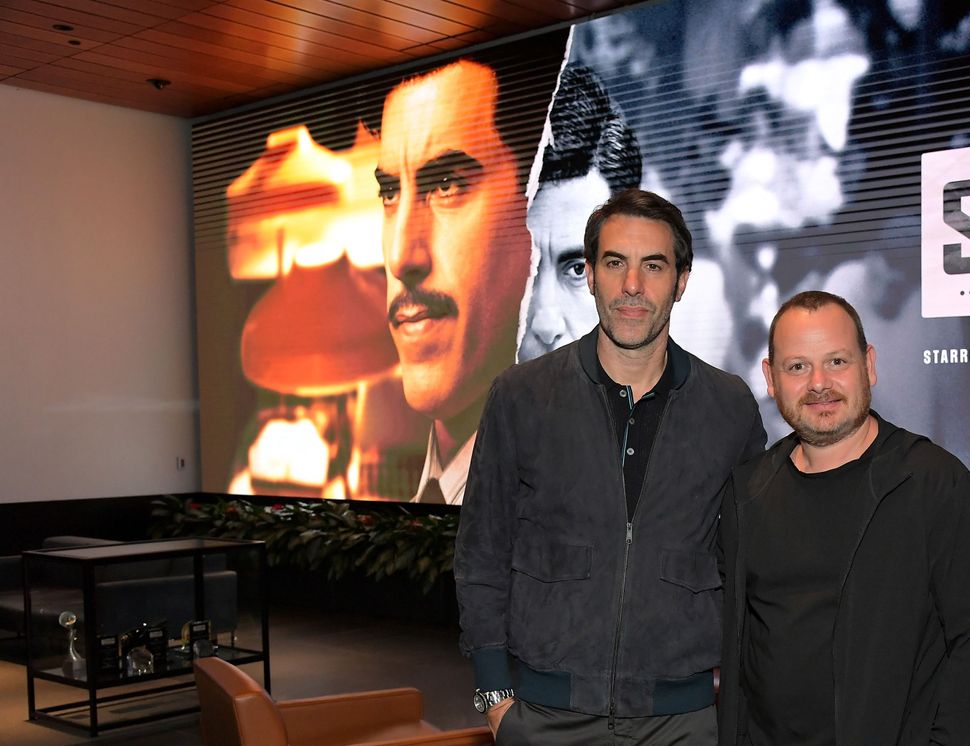 Sacha Baron Cohen and Gideon Raff at the premiere of “The Spy.” Image by Getty/Charley Gallay/Stringer

In July of 2018, the Mossad recovered a battered Eterna-Matic Centenaire 61 wristwatch from Syria. The timepiece belonged to Eli Cohen, an Israeli spy who, over several years in the 1960s, gained the confidence of Syrian generals and politicos before they publicly hanged him for conspiracy in 1965. The watch was returned to his widow. His body, moved several times, has yet to be found. Syria refuses to reveal its whereabouts.

Cohen’s survivors have recently received a new memento of the late operative: A limited series Netflix drama “The Spy,” by “Prisoners of War” creator Gideon Raff based on Uri Dan and Yeshayahu Ben Porat’s book “The Spy Who Came From Israel.” Like the watch, the show is durable, handsome, expertly engineered, but predictable in its movements.

In the show, when we first meet Cohen, he is a broken man. His fingernails have been plucked from his hands, he stares distractedly at a moth slamming into a streetlamp above his cell in a Syrian prison. A rabbi enters, urging him to sign his name to a letter addressed to his wife, Nadia (Hadar Ratzon-Rotem). Cohen (played by Sacha Baron Cohen, who, despite a mustache, never recalls Borat), hesitates, and the rabbi muses on the series’ familiar theme of deep cover forgotten identity: “My poor boy, you don’t remember your name. You don’t know who you are.”

Cutting to Cohen six years earlier, we have a man who is painfully aware of his own background. A number-cruncher in a department store, Cohen is a recent immigrant from Egypt and looks it. Israeli society doesn’t accept him. At a posh party at Nadia’s employer’s home he’s mistaken for a waiter. When his fellow Jews look at him, “They see an Arab. That’s it,” he confides to Nadia.

Cohen’s swarthy complexion and fluency in Arab become assets when the Mossad recruit him to go undercover in Syria, following a string of attacks by the country on Israeli territories near the Golan Heights. The irony that Cohen’s outsider appearance helped him serve his country is an interesting angle that could have used more play. Instead, this racial aspect is soon sidelined for a more rote examination of aliases taking on a life of their own.

Still, Cohen’s second class status in Israel proves to be what drives him to perform well in his job: Posing as an Argentine-born Syrian patriot Kamel Amin Thaabet. Cohen has something to prove, and his handler, Dan Peleg (Noah Emmerich), fears that he is too eager and may well blow his cover in his attempt to impress. This hunch proves correct, as Cohen’s capture comes about when he defies orders to provide additional intel via the Morse code transmitter in his Damascus apartment.

That’s not to say Cohen doesn’t seem to enjoy the work. He relishes getting information, establishing a furniture exporting business, with which he smuggles both microfilm and Syrian newspapers to his contacts in Switzerland. When a Syrian official offers him a piece of delicate intelligence, his eyes glint. Mostly, though, his path is agonized. He’s separated from Nadia and his two young children (he missed the births of both). Unable to call or write, Cohen can only commune with her in a ritual they conduct separately, and without the other’s knowing, enjoying a meal of bread and butter, which they eat alone at their respective tables in Israel and Syria, seeming to sense each other’s presence.

But Nadia appears to suffer the most from her husband’s absence, and the toll it takes on her – including the unwanted advances of Peleg – form the emotional core of the show. Occasionally her interludes of anger and grief feel like they belong to a different production, one that accepts the more mundane cover story that Cohen took a job as a furniture procurer for the Ministry of Defense. Part of this mismatched tone results from a bizarre choice in color correction. While Cohen’s Damascus pops with greens and golds, Nadia’s Israel is victim to a muted spectrum so wan and washed out as to render a clutch of oranges dropping down her apartment stairs an unappetizing shade of beige.

More vivid are the sequences in which Cohen makes history, running through the woods to alert an Israeli farmer of Syrian maneuvers; gifting Syrian troops eucalyptus trees by their underground bunkers near the Sea of Galilee — making them visible to Israeli forces; and aiding the 1963 Ba’athist coup. That last event would prove a boon to his operation, elevating him to chief advisor to Syrian President Amin al-Hafiz (Waleed Zuaiter.)

Along the way, Cohen loses himself in his cover (“I can’t put him away,” he tells Peleg of Thaabet, “I’m pretending to be me,”) but we only register this transformation when he returns home, and then all at once. Back in Israel he is treated not as a wealthy man, but an ethnic minority and a stranger to his own family. The scenes that broach this discord come too late to land their full impact. When this trauma does surface for Cohen, as explosions of anger and furniture-throwing, the show tips into melodrama that is beneath it.

Despite the dramatics, “The Spy” is more accomplished than most shows of its stripe – including later seasons of “Homeland,” adapted from Raff’s “Prisoners of War” – in juggling a human story and a well-crafted tale of international intrigue. While largely free of twists, the series builds to something bigger. It’s tense where it needs to be, and sprinkles its episodes with the proper breadcrumbs leading to its ultimate resolution: a showdown with a suspicious Syrian military man who we first meet in episode two.

The performances from top Israeli, American and British talent aid a respectable period sheen that occasionally fumbles its presentation with historical cameos (you will see a toddler Osama Bin Laden — you will groan). With a prestige-TV vibe, “The Spy,” sets the new standard for Mossad period dramas — less cartoonish than “Operation Finale” and less propagandistic than “7 Days at Entebbe.”

It’s a fitting tribute to the life of Cohen, whose true story was the stuff of spy thrillers. Even Cohen’s daughter Sophie Ben-Dor, who objected to her mother being portrayed as “a maid” — she appears to be a seamstress in the show – has said that Baron Cohen’s performance reminded her of her father.

For all its heavy-handed and familiar themes, the show never falters in that mission. It will remind the world that Eli Cohen lived.