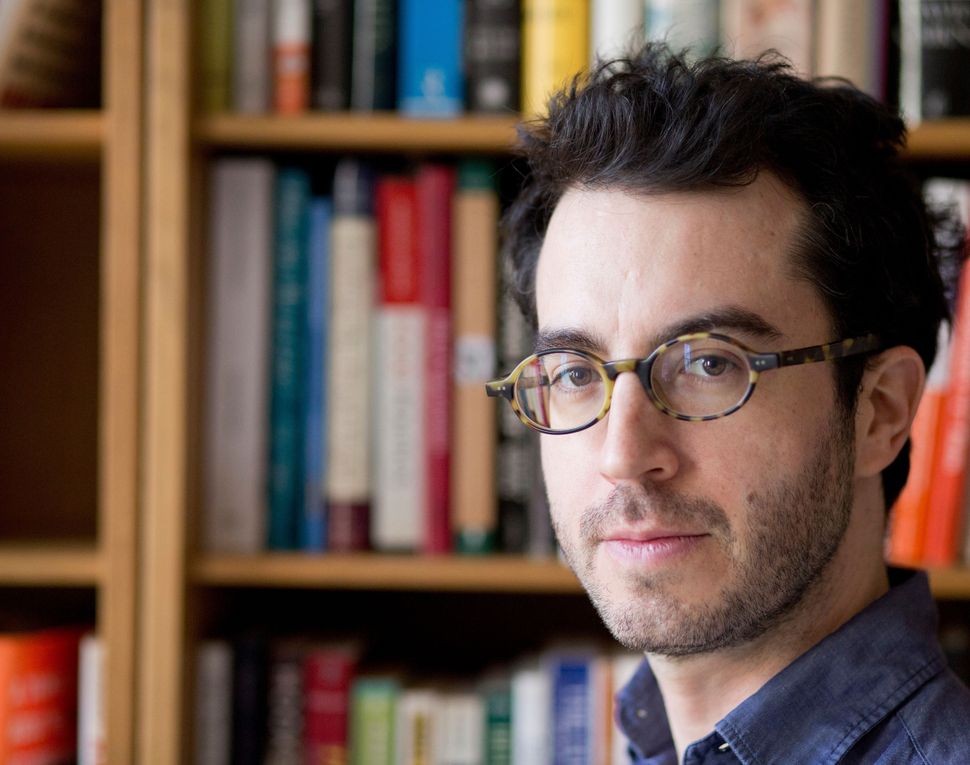 On page 64 of Jonathan Safran Foer’s latest book, “We Are The Weather: Saving the Planet Begins at Breakfast,” he admits he’s been burying the lede.

“This is a book about the impacts of animal agriculture on the environment,” Foer writes, owning that he evaded the issue for 63 pages because he feared readers would react defensively — or even be annoyed that he was up to his old tricks.

The topic is not unfamiliar to the writer, whose first nonfiction book, “Eating Animals” (2009), also the basis for a 2017 documentary, sounded the alarm for the cruelties of factory farming and the ethical choice to avoid meat.

But Foer insists that he returned to the subject of animal agriculture free of any agenda. And the science backs him. More than driving cars (gas or electric), more than calling your congressperson, changing the way we eat is perhaps the most impactful choice an individual can make for the environment. A simple tweak to our diet has the potential to curb nitrous oxide and methane emissions (recall the infamous farting cows of the Green New Deal), which, per unit, contribute to global warming far more than carbon dioxide. And by reducing deforestation linked to animal agriculture — around 80% of the practice is devoted to making room for crops for livestock and land for grazing — a change in diet can even restore trees that have a pivotal role in sopping up CO2. Whereas converting the energy grids of the world seems like an act of God and statesman, relying less on animals for our food is doable for most, and would have real effects.

Foer knows his recommendation — no animal products before dinner — is a difficult ask, and the book is an admission of this difficulty.

In raw pages packed with personal history, and thoughtful parables, Foer reveals his own struggle to accept a threat that still seems distant and whose worst effects are yet to come. He discourses at length with his conscience and outs himself as an accessory to the slow death of the planet, writing, “I am the person endangering my children.”

Foer largely avoids sanctimony. In acknowledging his own shortcomings,his suggestion that we alter our ways is easier to swallow. If he can do it — or at least try to — why can’t we?

The Forward’s PJ Grisar spoke with Foer over the phone. This interview has been edited for clarity and length.

PJ GRISAR: What prompted you to write this?

JONATHAN SAFRAN FOER: It had been growing in me for quite a long time — as I suspect concern for the environment has been growing in most people. For me, the discomfort of “What am I doing? Why am I not doing much of anything at all? Am I participating in the destruction or participating in the solution?” became intolerable. I decided I wanted to start by learning. The book is really a record of my own journey into the problem, which involved my going into the world and learning about what climate change actually is and the relationship between our daily acts and global consequences. But also going into myself and finding out to what extent I do I really care about this, and can I overcome the limits of my caring. And also, what is my ability to change?

The solution you arrive at — the major one — lines up with a previous conviction of yours — eating less meat and animal products. How did the research lead you there?

FOER: It felt like a bit of an unfortunate echo, actually. I didn’t intend to write a book about meat. I felt I had already done that, and frankly the instincts that led me to writing “Eating Animals” are largely about animal welfare. But it took me no time when looking into the relationship between our daily choices and climate change to realize this is what I’m going to have to write about. I really did worry [about it.] If I were a reader of this book, for example, I’d probably say “Yeaaaah, but he’s probably just trying to get us to eat less meat. Here’s the guy who doesn’t like meat and here’s a convenient way to further that argument.” And it’s not. If anything I became much more interested in moderation in this book. Not a rejection of anything, but a way to move toward eating less.

This is a vulnerable book — you admit to some embarrassing things re: your own eating of meat, your own guilt at being complicit in climate change. It’s also personal, ending with a letter to your sons. Were those parts difficult to write?

FOER: They’re quite difficult to write, but they were also a relief to write. It’s a relief to be honest about our limitations because it creates a space to try as opposed to this wall of shame. The part about eating burgers [Foer, a longtime vegetarian, admits in the book that he ate burgers a number of times during a difficult period in his life, and, after he wrote “Eating Animals.”] I wrote it and I erased it. And then I wrote it again, and I erased it. I didn’t like looking at it at all. But it’s the truth, and I think it’s a truth that a lot of people can relate to. The goal is not to be ethically perfect and the goal is not to look a certain way. The goal is to be honest about this thing that, like so many other people, I really care about.

An example used for the sort of change we need is something as communal and unquestioned as celebrating Thanksgiving or the war-time agreement to turn out lights during the World War II on the home front. How do you think we can reach that kind of paradigm shift, where adjusting our behavior just becomes a habit?

FOER: I think we’re almost there, actually. I feel like the tone of the conversation, the reach of the conversation, has changed dramatically in the last six months. I’ve been lucky enough to do some travelling and speak to a bunch of different audiences. Just last week I was in a quite small city called Hickory, North Carolina, and I spoke at a Christian college. I also did a podcast with Ben Shapiro a couple of weeks ago. I found those both really eye-opening and inspiring. I also felt a little ashamed, to be honest, because I made a lot of assumptions about what they were going to be like. That they would deny the climate science or cherry-pick ridiculous facts. I found them in both cases to be really productive, interesting and based not only in shared values, but a lot of shared assumptions.

In terms of the proposal to just eat meat and animal products for dinner? What do you see helping that prescription? Meatless Mondays? The Impossible Burger? Is that all a part of it?

FOER: It’s only gonna be parts. There’s not going to be [any one] thing. Different things work for different people, and I think that the necessity is not that we all have the same plan. The necessity is that we all have a plan. I had a reading in Brussels the other day and afterwards a young couple came up to me during the signing. They handed me their book and I opened to the title page and it was filled with handwriting. I said “What’s this?” They said “We’re getting married in a month and we decided tonight that we need to have a plan.” Their plan was “Don’t eat meat unless it’s being served at a friend’s house. Eat vegan two days a week. Don’t have more than two children and don’t drive more than 1,500 kilometers a year.” I found the specificity of it and the ways it did not overlap in what I think to be really inspiring, and it reminded me that I didn’t have a plan. I’d written this book and I have a plan for eating, but I didn’t have a broader plan. I need one, because if I don’t I’m just going to do what I always did.

Are you more or less hopeful now than when you started the book?

FOER: As I say in the book, we maybe pay too much attention to hope or overemphasize hope, because it sometimes can get us off the hook. That having been said, I feel extremely and very cautiously hopeful. Things are changing in the right direction at great speed, and I don’t have any doubt that we will do what needs to be done. I don’t know if we will do it in time.

Last week Jonathan Franzen wrote a piece on climate change for the New Yorker and it upset many people in the scientific community who said he got things wrong, was being overly nihilistic and even that he was taking away a potential slot from a climate scientist. What do you think of complaints that novelists shouldn’t be writing on science, or aren’t qualified?

FOER: I think that’s silly. We need everybody contributing what they can contribute, and if someone gets something factually wrong, we’ll correct it. But it’s much better that people from all walks of life: Novelists, journalists, students try to contribute and try to expand our ways of thinking about this thing that is so hard to think about. There is a temptation with climate change to leap to either the extremes of “Apocalypse Now,” or “We’re all gonna be fine” The reality is, we’re not all gonna die, and we’re not all gonna be fine. We’re near the beginning of this process of loss. Our actions will determine the amount of loss. So, when people say “We’re doomed or “We’re going to be fine,” the “We” doesn’t really include them. It’s a way of excusing that — it turns into an event rather than this highly variable process. That was my complaint with [Franzen’s] piece. But, he’s exactly the right person to be writing about this stuff, because he’s a damn good writer.

You wrote that on completing this book you planned to stop eating eggs and dairy — have you succeeded in that?

FOER: I’m happy to say I have. To be honest, I haven’t with perfect consistency, and it has not been effortless — but so what? I’m definitely doing things in a way that is quite different to how I did them before.