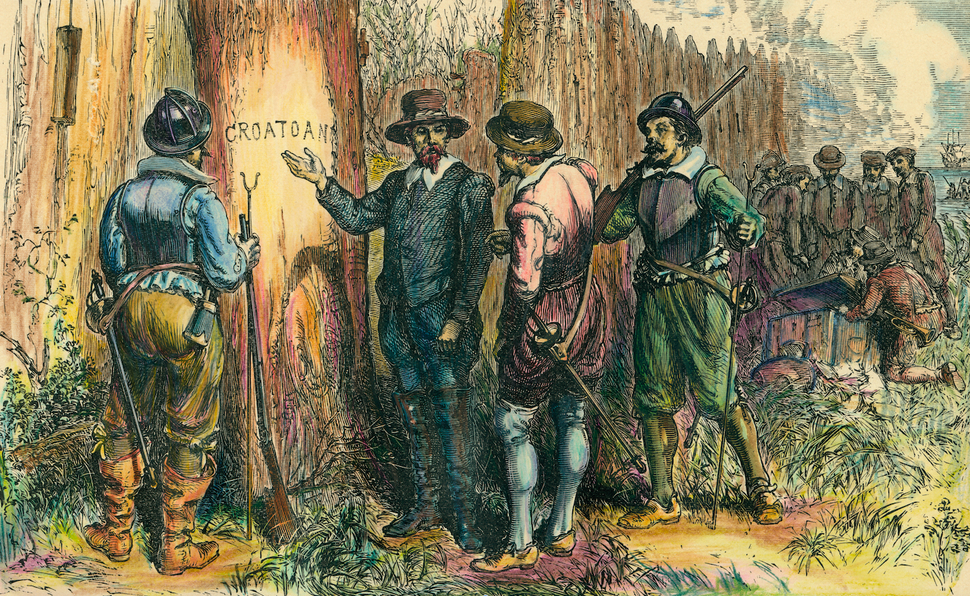 In 1585, some 100 men made landfall on Roanoke Island in present-day North Carolina. Sent to establish the first English North American colony, not all of the expedition’s members were English. And one, despite sailing under the auspices of the Protestant Queen Elizabeth, wasn’t even Christian.

Joachim Gans, a metallurgist from Prague, may well have been the first Jew in North America. His experiments at the site of the Roanoke Colony provide the only extant physical evidence of the settlement’s existence. And on July 27, nearly half a millennium after Gans reached American shores, his unusual role in the country’s history was commemorated near the place where he left his mark. On that date, Stephen B. King, the U.S. Ambassador to the Czech Republic, and Manteo, NC Mayor Bobby Owens, unveiled a North Carolina Highway Historical Marker close to the supposed site of the old colony, officially inducting the émigré as a part of American history.

Joachim Gans, native of Prague, member of the 1585 Roanoke Island Expedition, and first recorded Jewish person in Colonial America is on a new NC historical marker near the entrance to Fort Raleigh National Historic Site. pic.twitter.com/NCufr3u5u5

Gans’s path to the New World was a testament to his extraordinary abilities. As the Smithsonian’s website reported, records indicate that Gans left his native Bohemia for England at some point prior to 1581. At some point in his stay abroad, during which he invented a new process for refining copper, Gans was granted a special dispensation that allowed him to live in the country as a Jew, despite the fact that the English Edict of Expulsion, which forced English Jews into exile in 1290, was still in place. He was invited to stay on due to the recommendation of a courtier, and helped make cannons for English ships before Sir Walter Raleigh eventually enlisted him for the pioneer trip to Roanoke to study and source local metals.

Gans’s fellow voyagers knew he was Jewish, but were apparently unbothered by it. It may have helped that the other seafarers were also nationally diverse, coming from Portugal, Ireland, Scotland and Belgium.

Gans’s inclusion in the scouting group “marks the line where England was more interested in what he could contribute to the economy than holding onto religious prejudices,” Leonard Rogoff, president of the Jewish Heritage Foundation of North Carolina, who personally made the application for the historic marker, told the Times of Israel.

Once on Roanoke, Gans made quick progress, building a lab decked out with a high-temperature furnace and crucibles imported from Bavaria. He made contact with the local indigenous tribes, who delivered metals to him and waded through swamps looking for mineral deposits. Evidence indicates that Gans and the native Americans with whom he collaborated were able to find iron, silver and copper, but struck out on the top prize: Gold.

Gans’s work on Roanoke was short-lived. Facing starvation and conflict with the Algonquian-speaking natives, Gans and the rest of the Raleigh-commissioned crew left the island in 1586. A year later, 115 settlers, some encouraged by Gans’s claims of durable metal deposits, arrived on the island and established what would become known as the “Lost Colony.” All of the settlers vanished; the cause of their disappearance remains unknown. To date, the traces of Gans’s laboratory, discovered in the 1990s, present the strongest evidence of the Roanoke colony’s location.

Where Gans ended up is also something of a mystery, but the evidence presents a disquieting historical footnote. In 1589, he was charged with heresy in a London court for disputing the idea that Christ was the son of God. His run-in with the law marks the last known documentary mention of him; he was jailed, but, according to The Times of Israel, it’s unlikely that he was executed, as that would have produced additional paperwork. It’s possible Gans returned to his native Prague following his ordeal.

Gans wasn’t the only Jew that assisted in Europe’s colonization of the New World. Just over 90 years before he landed on Roanoke, the Jewish translator Luis de Torres accompanied Christopher Columbus on his journeys to Central and South America. Unlike Gans, Torres is believed to have converted to Christianity. It’s possible, however, that he came to the New World, like so many others eventually would, in the hopes of escaping persecution.