In A Recently Unearthed Letter, Gandhi Says Shana Tova To An Indian Zionist 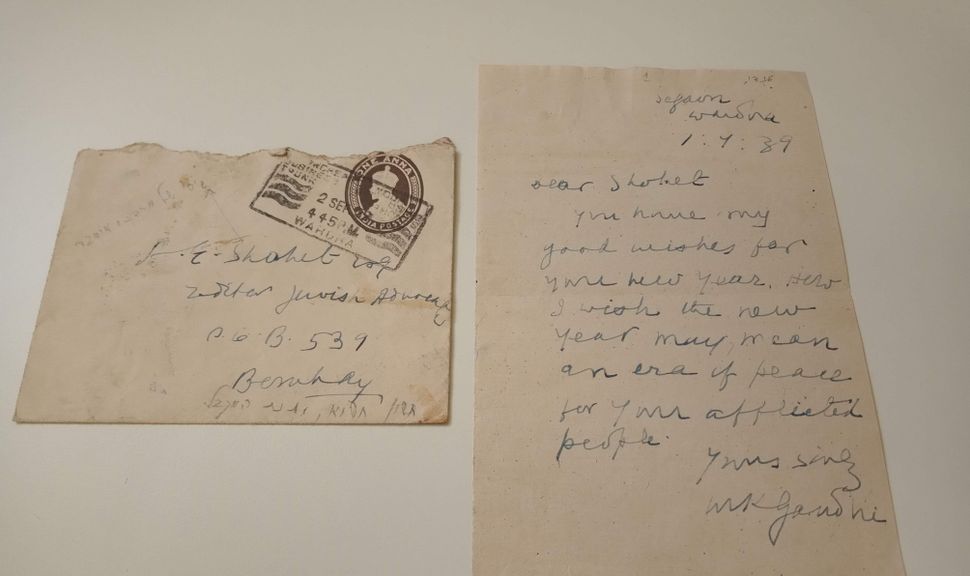 On September 1, 1939, the day the Nazis marched on Poland, Mahatma Gandhi, then the leader of the Indian Independence movement and a preacher of non-violent resistance, sat down to write a letter.

“You have my good wishes for your new year,” the letter read. “How I wish the new year may mean an era of peace for your afflicted people.”

The letter, written to A.E. Shohet, the head of the Bombay Zionist Association, was recently discovered in the archives of the National Library of Israel, which has posted it online for the High Holidays.

This handwritten missive, while cordial, is brief, but speaks to a larger correspondence and acquaintance with its recipient, Shohet. 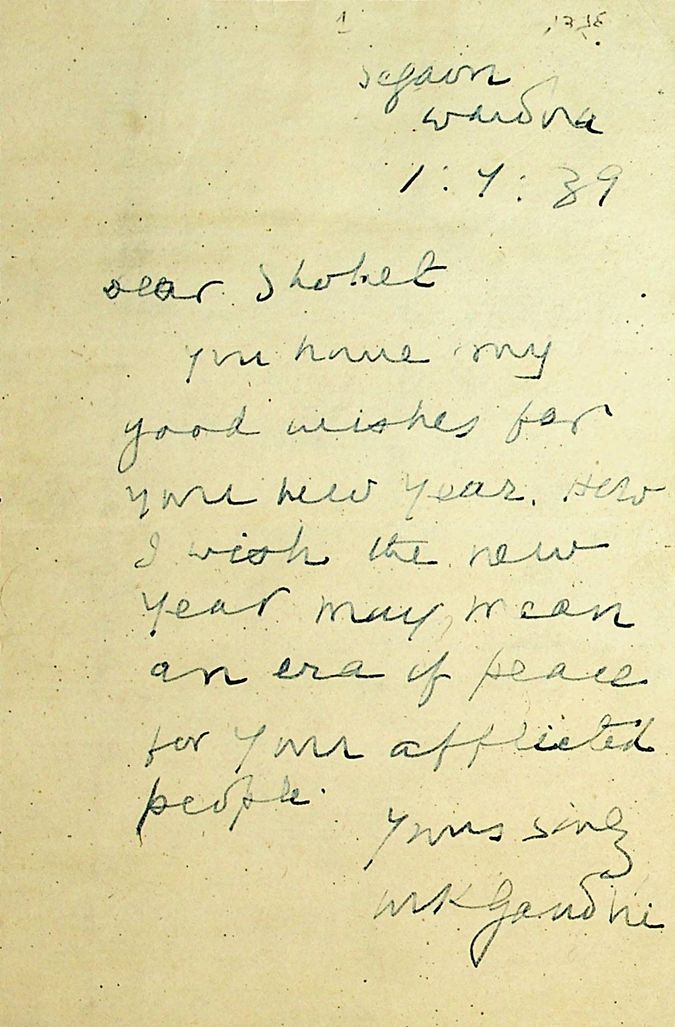 Shohet belonged to the Baghdadi Jewish community in Bombay and was an active Zionist, and headed both the Bombay Zionist Association and Keren Hayesod, the Bombay city office’s Zionist organization. He was also the editor of “The Jewish Advocate,” the official publication of the BZA and the Jewish National Fund, and the forum for a high profile dispute with Gandhi.

By 1939, Gandhi had served as president of the Indian National Congress, and was still a powerful force in their politics. He had not, however, said much on the issue of Zionism or the ongoing persecution of German Jews. When he did write about the Jewish plight — as in the November 26, 1938 article “The Jews” — he pushed for nonviolent resistance as a solution to both Nazi harassment and the struggles between Zionist Jews and Arab Palestinians.

Shohet responded to Gandhi’s advice in “The Jewish Advocate,” noting that what worked for the Harijans in India would not work for European Jews, since Jews had no homeland and had tried nonviolence for 2,000 years with limited success.

While Gandhi wishes Shohet well in this Rosh Hashanah greeting — perhaps sensing that things would get worse for the Jews as the war went on — he and his party opposed Indian involvement in World War II, withdrawing support for the British Raj when his Viceroy declared war on Germany without consulting them.

Shohet continued to recognize Gandhi as a powerful ally even after they duked it out in print, leading to a more familiar relationship that likely prompted Gandhi’s 1939 notes. The Zionist leader sought to influence the Indian nationalist through Hermann Kallenbach, a Jewish Zionist architect who Gandhi referred to as his “soulmate.”

Kallenbach and Gandhi lived together on Tolstoy Farm, a South African community established in 1910, which Kallenbach funded. It was at the farm that Gandhi developed his philosophy of resistance and where he and Kallenbach became extremely close.

Evidence of their kinship is present in letters, with Gandhi writing to Kallenbach, “Your portrait (the only one) stands on the mantelpiece in my room… even if I wanted to dismiss you from my thoughts, I could not do it.”

Kallenbach did his part to connect Gandhi to the Zionist cause, arranging for Shohet to interview Gandhi for four days at his ashram in Wardha in March of 1939. The effort, while earnest, was futile. Shohet walked away believing Gandhi still saw Zionism from a Palestinian perspective.

Gandhi would maintain his stance of peaceful resistance for Europe’s Jewry until the end, even when the worst of Nazi Germany’s crimes were known. Before he was assassinated in 1948, he called the Holocaust “the greatest crime of our time,” but insisted, according to Louis Fischer’s 1950 biography, that “Jews should have offered themselves to the butcher’s knife,” concluding that in submitting to their deaths through nonviolence, the Jews “would have aroused the world and the people of Germany.”

During wartime, he never became a public ally of Europe’s Jews — in fact, he corresponded with their tormentor in another holiday greeting.

In 1939 and 1940, Gandhi wrote two letters to Adolf Hitler, wherein he upbraided the leader of the Reich, but treated him with deference as well, addressing him as “Dear friend.”

“We have no doubt about your bravery or devotion to your fatherland,” Gandhi wrote Hitler on December 24, 1940, in the later, and longer letter, “nor do we believe that you are the monster described by your opponents. But your own writings and pronouncements and those of your friends and admirers leave no room for doubt that many of your acts are monstrous and unbecoming of human dignity.”

In the letter, Gandhi drew a parallel between Nazism and British Imperialism and noted the “humiliation of Czechoslovakia, the rape of Poland and the swallowing of Denmark,” at Hitler’s hands.

He did not explicitly reference the Jews. Gandhi, instead, urged an end to hostilities, noting, as it was Christmas Eve, that, “During this season… the hearts of the peoples of Europe yearn for peace.”

In A Recently Unearthed Letter, Gandhi Says Shana Tova To An Indian Zionist