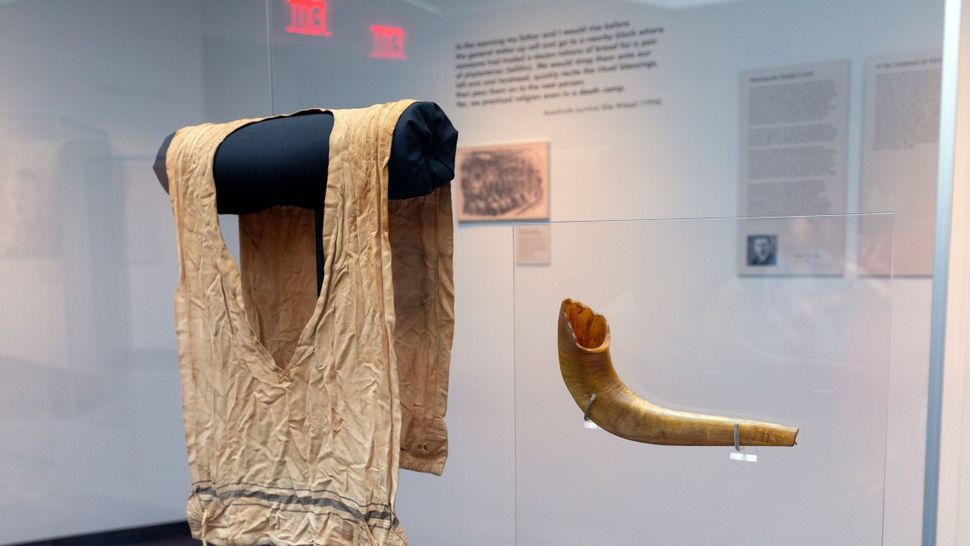 Very few heard it. It was Rosh Hashanah, and as the Jewish year 5704 turned into 5705, Chaskel Tydor, a Jewish work dispatcher at Auschwitz III-Monowitz, arranged for a minyan of prisoners to be sent to an isolated part of the camp so they might pray unnoticed by the SS guards.

When they returned from their prayers, one member of the minyan confided in Tydor that they had brought a shofar with them, and that they had blown it.

Now, that same shofar, given to Tydor four months later, on the eve of the 1945 Death March out of Auschwitz, is on display for the first time. It was unveiled this week, in the lead-up to Rosh Hashsanah, at the Museum of Jewish Heritage in Manhattan, as part of their exhibition “Auschwitz. Not long ago. Not far away.”

Blowing a shofar — or even having one — was risky in a Nazi camp, where guards killed with little provacation. But there are still a number of reported instances in which imprisoned Jews found a way to use the ritual horn to commemorate the High Holidays, often by bribing or distracting camp officers to look the other way.

Some of those horns were preserved after the Holocaust. Yad Vashem displays a shofar crafted in 1943 in the Polish labor camp Skarzysko-Kamienna; its maker, Moshe Winterter, bribed a Polish guard to get the ram horn used to make it, which turned out to be an ox horn.) And as The New York Times reports, additional shofars likely arrived at Auschwitz during the hasty deportation of Hungarian Jews in 1944, during which time the prisoners’ belongings, which were not thoroughly searched, were cached in a warehouse nicknamed “Canada,” where prisoners often smuggled items out in the camp’s final months. The smuggling may account for numerous eyewitnesses accounts of shofars being blown at Auschwitz. 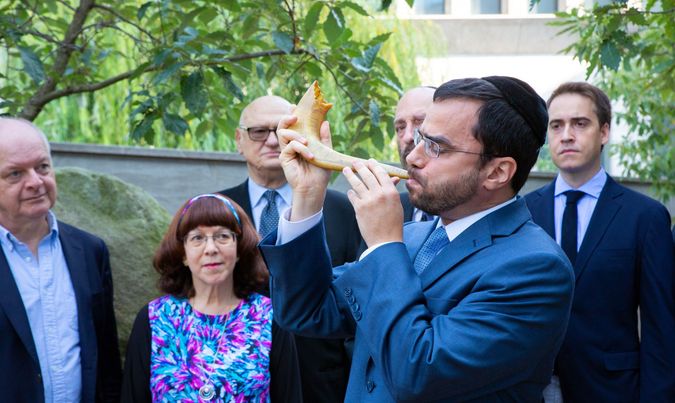 Still, the story of Tydor’s shofar is among the more vivid accounts of shofar smuggling. The museum first learned of the artifact’s existence through Judith Tydor Baumel-Schwartz, Tydor’s daughter and the director of Holocaust research at Bar-Ilan University in Ramat Gan, Israel.

Baumel-Schwartz visited the exhibit in the spring and told Robert van Pelt, the exhibition’s curator, how the holy object came to be in her family. The evening before the Death March, which was initiated in response to the advance of the Russian Army, a prisoner approached Tydor with an item wrapped in a rag. It was the shofar, the same one used at the service four months before.

Recalling her father’s story, Baumel-Schwartz told The Times that the man said, “I’m going to die on this march. If you live, take this shofar. Tell them we blew the shofar at Auschwitz.”

Tydor kept the shofar, bringing it first to a subcamp in the town of Gleiwitz, then to Buchenwald. After the war, he used it to ring in 5706, sounding it on a boat off the coast of Haifa as he approached mandatory Palestine in 1945.

When van Pelt heard Tydor’s story, he asked Baumel-Schwartz if she would consider loaning it to the museum. The horn was unveiled at an event September 23.

During its loan, currently scheduled to stay in the exhibit until it closes on January 3, 2020, the shofar will be used at services at Congregation Kehilath Jeshurun and the Edmond J. Safra Synagogue, both on Manhattan’s Upper East Side.

Baumel-Schwartz said in a statement that the shofar was an emblem of her father’s “spiritual resistance.”

“He always looked forward, never backward,” Baumel-Schwartz said. “He helped, encouraged and supported everyone he could, giving them hope for the future.”