About That Time Jesus Fought Hitler On ‘Preacher’ 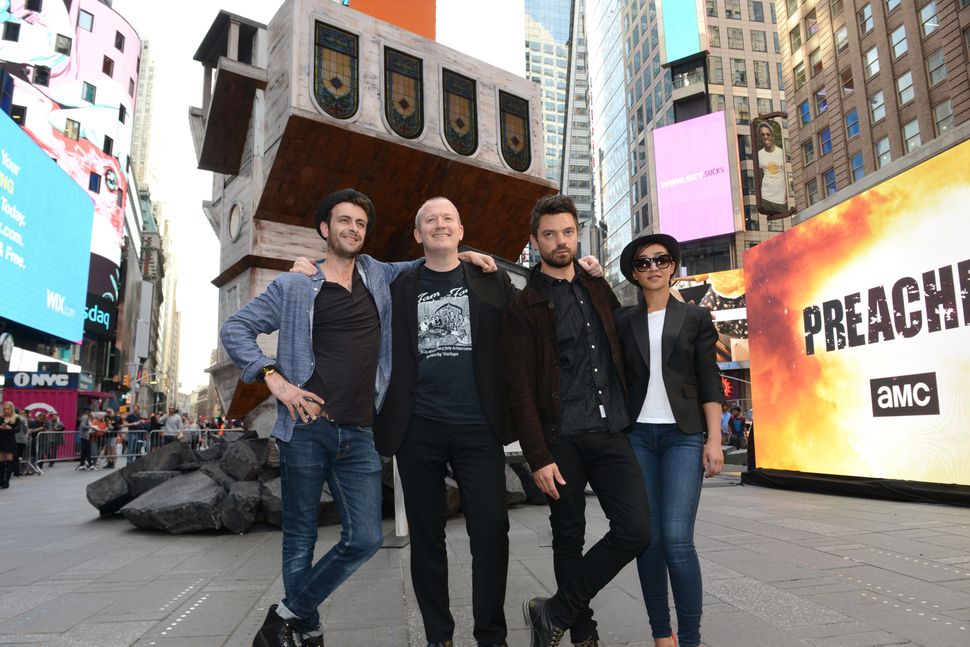 The cast of ‘Preacher’ with creator Garth Ennis in 2016. Image by getty/Noam Galai/Stringer

The Platinum Age of television has given us has given us the Jesus-Hitler showdown we didn’t know we wanted — and it’s not even pay-per-view. Spoilers ahead.

Last Sunday, on the series finale of “Preacher,” the Evan Goldberg and Seth Rogen-produced AMC adaptation of Garth Ennis and Steve Dillon’s comic of the same name, the Galilean rabbi strangles the Führer to death.

And he does so while affirming — make no mistake about it — that he’s one of ours.

To recap: “Preacher,” a show about a gun-toting, super-powered priest-in-training (Dominic Cooper) and his literal search for God, has featured the characters of God, Jesus, Jesus’ wonky-eyed descendant Humperdoo — yes, Humperdoo — and Adolf Hitler for multiple seasons.

In the show, Jesus (Tyson Ritter) returns to earth in the lead-up to the Apocalypse, descending to Masada to discuss Armageddon prep. The show’s version of Hitler (Noah Taylor) served in his afterlife first as the custodian of hell, then later its ruler, but managed to escape his eternity of damnation to hold down a job as a sandwich artist named “David Hilter” – an apparent nod to this “Monty Python” sketch.

The lore of “Preacher” is deep and baffling to a newcomer, but the final episode, “End of the World,” is so bananas that no amount of context is much help.

In the sequence in question, Jesus and Hitler duke it out in what appears to be a bunker-slash-hotel room mere minutes before the anticipated end of the world. Jesus pushes Hitler’s face through a series of glass liquor containers on a sideboard. Hitler calls Jesus, who is decked in a parti-color windbreaker, a “hippy wimp.” Jesus calls him a “fascist pig.” But the climax, which, according to an Entertainment Weekly interview with showrunner Sam Catlin, was the last shot of the series, is worth a closer look.

While being choked by his Nazarine sparring partner, Hitler manages to sputter the word “Jew.” To which Jesus replies, “You’re damn right.”

The declaration, wittingly or not, brings to mind Paul Rudd’s recent quotable moment in “Between Two Ferns: The Movie,” in which he maintains that Jesus put his Judaism “out there for everybody to see,” adding that the first century carpenter-turned-itinerant rabbi was “one of our best.”

After Jesus strangles one of the Jewish people’s greatest tormentors, God (Mark Harelik) arrives to tell Jesus that it’s showtime for the Apocalypse. In a stone arena, a crowd of people garbed in red and white and brandishing foam fingers chant “Messiah.”

But Jesus doesn’t feel like being God’s instrument anymore, telling him that “I’m just a person — no better or no worse than anyone.” Of course, this is largely consistent with some Gospel accounts of Jesus’ humility, as well as with the Jewish view that Jesus was merely mortal and not a divinity. (Granted, the Jesus of “Preacher” is in fact some kind of demigod, as he is clearly alive some 2,000 years after his death and resides part-time in heaven.)

When Jesus refuses to go along with the messianic plan, God tells him that using him is, in effect, just “show business” and that he can end the world anytime He likes, with or without Jesus’ contribution. Jesus suggests an alternative: “You could be merciful, patient, tolerant and loving.”

Nah. The God of “Preacher” storms off intent to bring an end to things. Sure, the world is ultimately spared (I’ll spare the details), and there’s a whole lot of Christian iconography through the closing proceedings. But in Jesus’ climactic fight with Hitler, one feels the influence of boychiks Goldberg and Rogen, who developed the series alongside Catlin.

After all, when given the character of Hitler, most of us are not above a little vengeance — even in this season of forgiveness.

About That Time Jesus Fought Hitler On ‘Preacher’