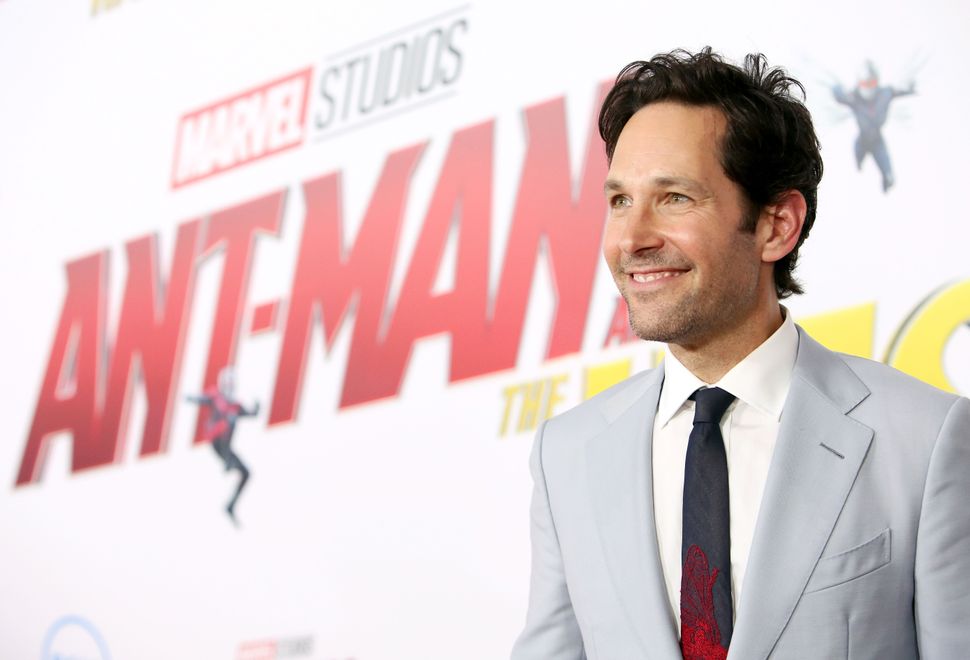 Paul Rudd gives us much to kvell over.

Since “Clueless,” he has been a Nice Jewish Boy heartthrob; he’s pure, funny, talented, good-looking and scandal free. Like all the best movie stars, Rudd elevates everything he’s in. Even if you don’t like one of his performances or films, you always like him. If you are Jewish, it’s likely you like him even more.

Part of the appeal of Paul Rudd may be that he was, for a time, one of the Jews’ best kept secrets. Like another handsome Paul (Newman), his heritage was not, until recently, widely known to those outside of the Jewish community — and even to some within our ranks. (I recall a cookout where I spoke with a landsman who was dismayed that Rudd had been cast in a Moe Berg biopic over a Jew, and had the pleasure of informing him that Rudd is, in fact, one of us.)

On Friday, Rudd was pressed on the issue of his background, by a notoriously tough interviewer.

“What advice would you give a young actor who wants to hide his Jewishness as well as you have?” Zack Galifianakis asked Rudd in a segment for “Between Two Ferns: The Movie,” the recently-released feature-length riff on the popular Funny or Die web series.

For the uninitiated, Galifianakis plays a version of himself in these interviews: an uncouth, tactless and deliberately insulting interlocutor whose celebrity subjects always manage to make him look foolish. Rudd was no exception.

“I’ve never really tried to hide my Jewishness,” Rudd answered. When asked if he was practicing, Rudd won the heartsand mindsof Jewish Twitter with his riposte.

“No, I’m not a practicing Jew,” Rudd answered, pausing a moment for effect. Then, with a swivel of his head and a winning smile: “I perfected it.”

Well, this happened. Paul Rudd getting a little feisty about his Jewishness. pic.twitter.com/U4bOMnAX0v

People ate it up. Baruch Hashem. What a pithy, but profound, way to answer the question mused Alma editor Molly Tolsky, writing how, after sitting with the joke for two days, she “began to think that it’s not only just a great one-liner, but a deeper comment that gets to the heart of how so many Jews today feel.”

Of course she’s right. The response speaks to that common aphorism known in Reform circles: There is no one way to be Jewish.

I, like many others, recognized the line as iconic, arriving just in time for the High Holidays, a time of reflection where many Jews take stock of their Jewish identities. Paul Rudd had, once again, proven to be an MVP of the Chosen People and, to all watching, emerged from any question of crypto-Jewry. Rudd may not have written the line himself (Scott Aukerman — not a Jew — wrote and directed the film), but he delivered it perfectly. Reader: I laughed. I thought this might be my favorite interview with Rudd and his most solid gag, even besting the many times he showed that “Mac and Me” clip on Conan.

And then I watched the bloopers at the credits.

The blooper thing is gimmicky, sure, but for a project like “Between Two Ferns,” which is fueled by our perceptions of A-Listers — often by subverting our ideas of them — the chance to see actors out of character is a nice way to ground the experience when the narrative ends. This authenticity and candor is something we like to see, and something that press junkets and late night talk show appearances seldom provide. Galifianakis is good at catching people off-guard with his rude questions, and it’s fun to see them respond in a real way.

Which is why I was surprised that Rudd’s outtakes — the last ones shown — didn’t get more attention.

In the clip, Galifianakis once more asks Rudd about his advice for young actors looking to hide their Jewishness. Rudd, like Brie Larson, Peter Dinklage and David Letterman before him, cracks up. And then he tells his own joke — one that, unlike the viral retort, we can tell is unscripted and, fair warning, pretty blue.

“You know what happens when a Jewish guy walks into a brick wall with a full erection?” Rudd asks.

“He breaks his nose,” Rudd answers, before doubling over with laughter on his chair. He covers his face with his hand — embarrassed, in hysterics? He tells Galifianakis “I’ve told that joke for 20 [years.]”

I think I’ve probably been hearing it about as long.

The exchange is revealing. Rudd clearly has a sense of humor about being Jewish. But this is probably the least sophisticated — and among the more offensive ways — to express it.

The joke is a tired one. I’m not writing to the ADL about it, but it seems like it ought to diminish some of the good will Rudd inspired in us just 30 minutes earlier. And really, there was no reason to go there.

As we’ve seen, and as Rudd articulated, there is no one way to be Jewish — secular, practicing, cultural but nominally atheist — but is his idea of “perfecting” Judaism being able to deliver a stupid Jewish joke familiar to casual anti-Semites?

If Rudd revealed anything, it’s that he himself is imperfect.