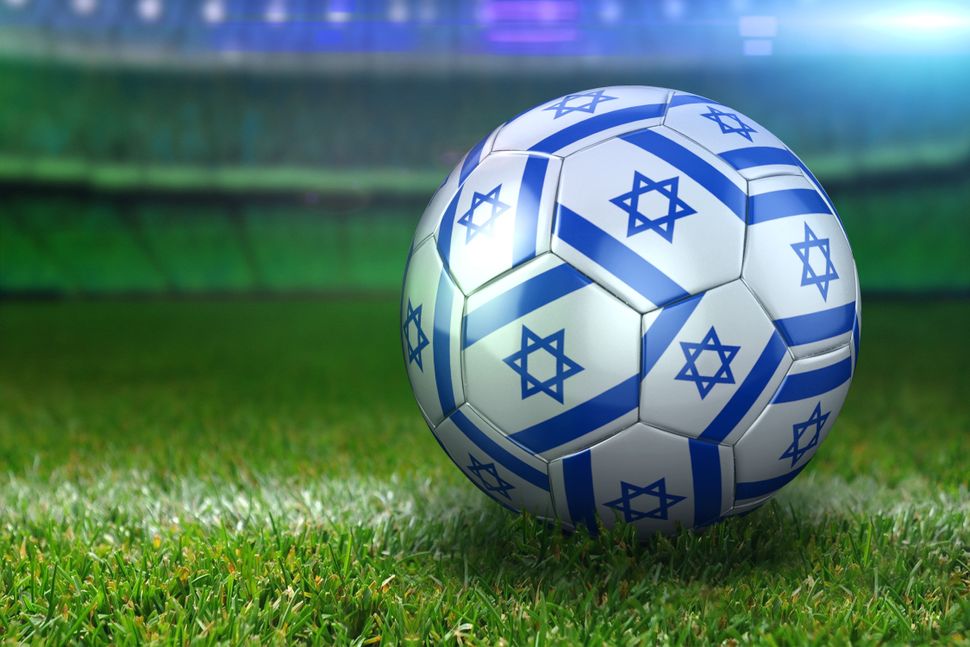 More Noble Than War: A Soccer History of Israel-Palestine

With its tag line of “two great tastes that taste great together,” Reese’s Pieces is actually an outlier as a successful combination product. More often, when you take two previously proven ingredients and combine them, your audience is not the happy union of everyone who likes either, but rather the niche intersection of people who happen to like both.

This then is the risk of using the great taste of soccer as a delicious coating for the complex flavors of Middle Eastern geo-politics. Though looking at the world’s most famously troubled region through the lens of the world’s most popular sport is a fascinating way of addressing the history of “Israel-Palestine,” the onus lies on the author to keep historians interested in soccer and, perhaps more tryingly, to keep English-speaking soccer fans invested in Middle Eastern history.

Here though, the link between soccer history is both deeper and of more current interest than might be obvious to the casual observer. Colonialism brought along soccer at the very moment that urbanization provided the ideal conditions for its quick proliferation. And, for contemporary piquancy, in recent years the Palestinian Football Association has been lobbying FIFA, the sport’s governing body, to sanction — even ban — the Israeli Football Association for what it claims are serious infractions of FIFA’s rules.

So this is a book that should definitely have been written. And Nicholas Blincoe, a British author who divides his time between Bethlehem and London, is a perfectly reasonable choice of author. As the geography of his bases suggest, he is embedded in a particular way with regard to the history. In his defense — and it’s a comprehensive defense — by the early twenty first century, anyone with the opportunity to write such a book would need to have a position on “Israel-Palestine” one way or the other. As far as his sympathies are concerned, Blincoe is fairly mild and transparent — referring to the settlement of Jewish refugees within the British mandate as “European Jewish colonialism” is about as extreme as he gets.

Furthermore, Blincoe’s Britishness is certainly no bar to his deep criticism of British policy in the Middle East (and in regard to FIFA) in the first half of the last century. Indeed, if there’s one thing that everyone in that area of the Eastern Mediterranean seems to agree on, they were mistreated by the British who ruled unevenly and left a mess.

Blincoe’s book is part of a growing genre which uses soccer to view the world through a soccer lens, following, and perhaps best illustrated by, Franklin Foer’s 2004 “How Soccer Explains the World: An Unlikely Theory of Globalization.” Blincoe, who provides a helpful bibliography, explicitly draws on work by the Israeli and Palestinian historians Amir Ben Porat and Issam Khalidi (most notably the latter’s “One Hundred Years of Football in Palestine,” (Amman, Dar al Shouk, 2013)). But, for color, he too often veers into believing the wonderful but self-serving fables of the founding of Israel from the author and intelligence agent, David Tidhar. Blincoe knows that Tidhar is an unreliable narrator of pre-state politics personalities and proceedings but believes him too much anyway!

“More Noble Than War,” which takes its title from the refrain of a song sung by Palestinian soccer fans, is fascinating in parts but distractingly uneven. Blincoe commendably attempts to merge the political-historical, the soccer-historical and the personal while also trying to convey the multiple intersecting interests and factions that have shaped the region and its current soccer configurations. In trying to do all three, he fully succeeds in none.

There are glimpses of fascinating stories. Blincoe mentions how the People’s Cup trophy was stolen after the disputed 1947 final and has never been returned, though reputed to be held as a club secret treasure until today; he visits briefly with the Mansour family whose four generations have threaded through 90 discontinuous years of Jaffa soccer (currently the club is named Sons of Jaffa Orthodox FC); Blincoe returns again and again to the schemes of Yosef Yekutieli, the prime mover of Israeli Jewish sport, the Israel Football Association and Israel’s “abandoned property” committee, whose son, it transpires, was the architect of the Israeli nuclear bomb.

Each of these alone could have made for a compelling book, or could have been woven together to tell a story. Indeed, the involvement of Yekutieli in real estate within a conflict about disputed land is another prevalent theme that Blincoe can’t do full justice. Too often though “More Noble Than War” tries to tell the story of some essence of soccer and, in so doing, conveys neither complexity of interests on the one hand nor, on the other, the intense personal passions of partisans, activists and soccer fans.

The book is divided into two parts, pivoting around the establishment of the state of Israel. That’s a significant historical moment and significant for the book because it marks the point at which the recognition of the Israeli FA (at the expense of the Arab sponsored soccer federation), was inexorable. For this book that is crucial because it’s the point at which there’s an actual documentary trail. But the real distinction in the book is between the historical explanations and those occasions when Blincoe can actually go and do some reporting.

At moments, Blincoe interjects himself in surprising and intrusive ways. While discussing the Palestinian General Strike of 1936 he suddenly mentions (for the first and only time) a Ghanaian friend in London and speculates about exiled Palestinian elites mixing with exiled Ghanaian nobility in the Seychellese. Though he has mentioned his wife’s Palestinian family as context for his insights into Bethlehem, he abruptly mentions, as an introduction to a reporting trip, that he is no longer living with his wife. These faux pas are a shame, as his stories are compelling, even when his histories are dry.

One compelling story opens the book as Blincoe imagines an actual game at the Palm Court in 1924 between Maccabi Tel Aviv and Hakoah Vienna. The moment distils so much of the book’s content: the passing of the torch from Europe’s greatest Jewish team to Israel’s strongest team, the event taking place an Ottoman ground in Arab Jaffa. Unfortunately, Blincoe offers few such accounts until the book reaches the current day and he tells, with a filmmaker’s clarity and purpose, of going to training with the Mansours, of attending a game between Maccabi Tel Aviv and Maccabi Petach Tikva (the “oldest surviving competitive fixture in Israel”) and of interviewing Jibril Rajoub who is the head of Palestinian football and touted as a future head of the Palestinian Authority.

As a competitive venue acting as a proxy for conflict, sports in general — and soccer in particular — are either a way of cathecting sectarian tensions or of bringing social divisions to the surface. Throughout the book Blincoe adduces examples of both, with a simmering bureaucratic war as constant backdrop during the fractious half-century from the Balfour Declaration to the 1967 war. Although contemporary Israeli soccer leagues are entirely composed of multi-ethnic teams (with one notable exception), there are also entirely separate Palestinian leagues in the West Bank and Gaza. Arab teams in Israeli leagues — most famously Bnei Sakhnin, who won the State Cup in 2004 — have enjoyed some success, but have done so in the face of institutional opposition and intransigence.

Bnei Sakhnin offers a fascinating case study. It has been discussed so often that Blincoe cites a comparative analysis of how it has been covered. The two main sporting blocs in Jewish Israel were Maccabi (politically right-ish, a lever of the establishment during the early Mandate era) and HaPoel (literally “the workers,” of socialist heritage, related to the establishment during the first decades of statehood). The precursors to the Israeli FA discouraged Palestinians from participating in soccer under their aegis. But with the advent of FIFA recognition the Israeli FA could offer federated organizations funding based on the number of affiliated clubs regardless of their ethnic roots. This led to Maccabi and Hapoel racing to sign up affiliates across the country. In 1991, Bnei Sakhnin was formed by a merger of Hapoel Sakhnin and Maccabi Sakhnin which were both founded during that earlier period. And, whatever symbolism one wants to impute to the club’s triumphs, they have come with a multi-ethnic team and a resolutely united front.

The success of Arab and Jewish teams fielding multi-ethnic teams is that, along with pharmacies, soccer fields are one of the few venues where Arab and Jewish Israelis mix in general society. The exception is the lamentable and disgraceful racism of Beitar Jerusalem and how – like other European clubs with fascist origins – it is tolerated, still, by national institutions. Proud inheritors of Jabotinsky’s Revisionist mantle, Beitar supporters bill the team as “Forever Pure,” violently objecting to all Arab or Muslim players. They have never fielded an Arab player and their fans infamously verbally abused their own players – eventually even burning the club offices and museum to the ground – when the management brought in two Muslim Chechens. They even hurled racial slurs at Toto Tamuz, an Israeli Jew of Nigerian origin who played for the Israeli national team and won five titles with Beitar.

Especially given the false binary of “Israel-Palestine,” it is easy to think that the context of the game will mirror its structure with two halves and two teams. The “Soccer History of Israel-Palestine,” though, has appropriately many quarters and multiple teams. The British, the Jews and the Arabs contained multitudes — even with regard to soccer. With British factions, contingent alliances between a mixture of parties and political, ethnic and class divisions running through Arab and Jewish groups alike, there has rarely been a simple story about “Israel-Palestine” and soccer is no exception.