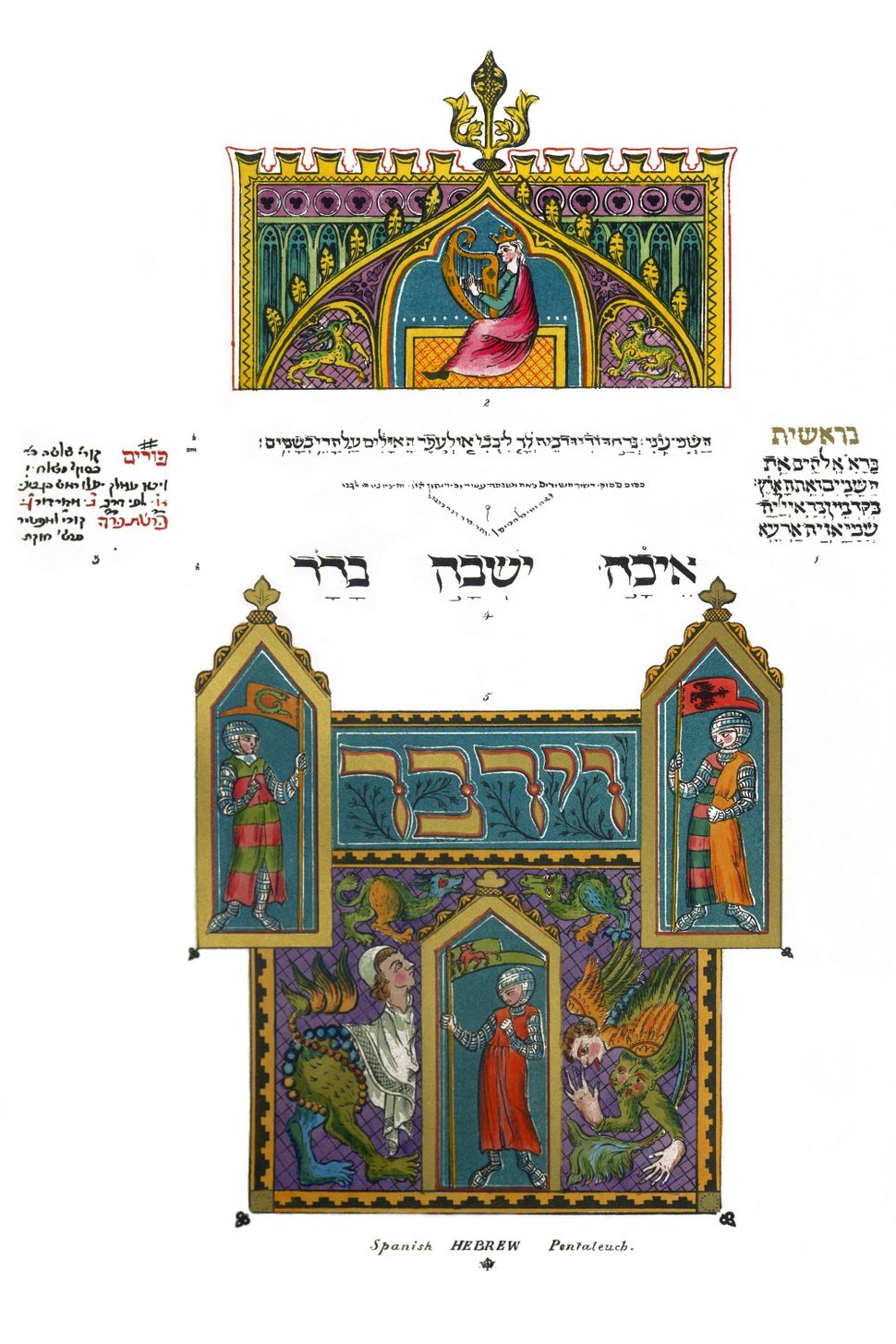 Hebrew Bibles, unlike their best-known Christian and Muslim counterparts, are not renowned for their elaborate ornamentation. But during the Middle Ages, some were as vivid and artful as the famous illuminated New Testaments and Qurans we marvel over today.

Imagine figures of naked men contorted into the shape of Hebrew letters; a full-page illustration of Jonah’s head peering up from the maw of the great fish that swallowed him; or a gilt-covered menorah with a lion resting at the candelabra’s base. You have envisioned the Kennicott Bible, a 15th-century Spanish tome, which, over 500 years after the expulsion of Spanish Jewry, this week makes its homecoming to Galicia in northwestern Spain.

The Kennicott, named for Benjamin Kennicott, the Oxford librarian responsible for its purchase, will be the centerpiece of a major exhibition on Galician history at the Cidade da Cultura, a complex of cultural buildings in Santiago de Compostela, the Guardian reported. It will be on view there from November 8 until next April, then return to the Bodleian Library at Oxford.

The Bible’s journey will be considerably easier than its first international voyage on the occasion of the 1492 Spanish edict of expulsion.

Made for the wealthy Spaniard Don Isaac di Braga, the Bible is believed to have passed through Portugal, Northern Africa, Gibraltar and Scotland before its acquisition by Oxford in 1772.

“It shows how, at one time, people of three religions — Jews, Muslims and Catholics — coexisted in Spain,” Román Rodríguez, minister for culture and tourism in the regional government of Galicia, told the Guardian. “It also shows that there was a strong cultural and economic Jewish presence in Galicia.”

The Bible suggests an open exchange between the Abrahamic faiths, including arabesque shapes as well as marginalia recalling the illuminated manuscripts of Christian bibles popular among nobles in much of Western Europe through the Middle Ages. But César Merchán-Hamann, the curator of Hebraica and Judaica at the Bodleian, told the Guardian that the Kennicott, while unique, is in part singular for having survived to modernity, while so many other books that shared its aesthetic qualities did not.

“In many cases, the survival of books was completely random and you’re in a terrible situation when you know there’s something big behind all this but you can only try to reconstruct it,” Merchán-Hamann said. “That’s what makes it poignant.”

The Kennicott Bible is one of a select number of surviving illuminated Hebrew bibles, many of them also originating from Spain or nearby Portugal. In 2011, three were displayed at the Metropolitan Museum of Art in New York.

The long overdue return of the Bible to its home in Galicia is only a temporary arrangement, but Rodríguez told the Guardian he didn’t think it necessary for the book to return to Spain permanently.

“It’s Galician, no matter where it is,” he said.