In ‘Advocate,’ A Controversial Israeli Lawyer Makes Her Case Against The Occupation 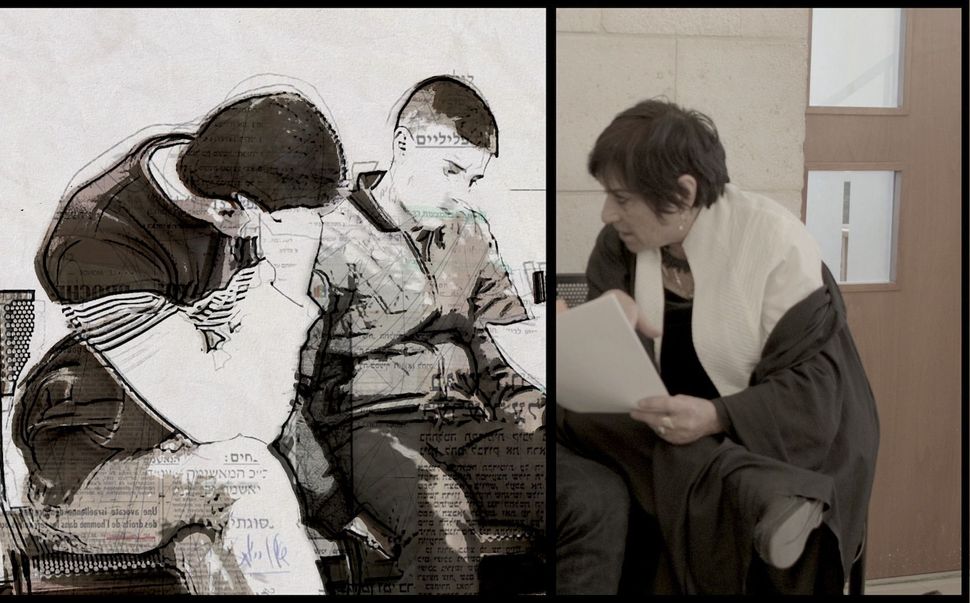 Lea Tsemel advises her client in “Advocate.” Image by Courtesy of Film Movement

In the closing minutes of “Advocate,” Rachel Leah Jones and Philippe Bellaiche’s documentary about Israeli attorney Lea Tsemel, the subject identifies herself.

“Lea Tsemel,” she tells a reporter in English, “losing lawyer.”

This descriptor is at once accurate, self-deprecating and overly modest. Tsemel did lose. She almost always does. But, then again, she almost always chooses cases that seem fated to lose.

For five decades, Tsemel has served as the defense for some of the Jewish State’s toughest cases. She’s been called the “devil’s advocate,” and often her critics ditch the second word. Her law office is crammed with thick binders whose spines read “Suicide Bombings,” “Stone Throwing” and “Accessory to Murder.” In her 70s, Tsemel is a tough-talking, indomitable woman who stands steady in a controversial philosophy.

“I’m an Israeli occupier no matter what I do,” Tsemel says. “I ‘enjoy’ the fruits of occupation both bitter and sweet.”

The daughter of European Jews who made aliyah in the 1930s, Tsemel grew up with an awareness of the Palestinian struggle. She lived in the Arab-Israeli city of Haifa in an Arab-owned home and was a toddler when the owners fled in the 1948 war and were then unable to return.

This early experience — and others that followed — guides which cases she’ll pursue. “If the act is intended to resist the occupation as such, I’ll take it on.” The direction of her legal career was determined on the front lines, and has existed for as long as the occupation itself.

Archival footage and testimony show Tsemel, then a law student, as a volunteer in the 1967 war, arriving at the Kotel after the Old City was taken by the IDF — she believes she was the first Israeli woman to stand there. But soon after the conflict’s conclusion, Tsemel began to see signs of trouble: displaced Palestinians traveling on the roadside, forced to resettle, and, at the site of the Kotel, an altogether different scene.

By the late ‘60s, Tsemel joined Matzpen, a radical anti-Zionist organization and, by 1972, she had made a name for herself defending members of the group who had been accused of treason.

Tsemel’s high profile cases kept coming. She was the advocate for a group of Palestinian men accused of killing six settlers and even served as the attorney for her husband, the anti-Zionist journalist Michel Warschawski, who was accused of printing documents for the Popular Front for the Liberation of Palestine.

After a few days of interrogation, Warschawski called Tsemel begging her to move for his release. When she heard that the interrogator was the same one that her clients faced a decade earlier — meaning he hadn’t been promoted in all those years — she scoffed at his fear, telling him, “You’re not worthy of being my husband.” She claims that she had to be tough on him, so he would toughen up, too.

This attitude — brash, pragmatic but ever-optimistic — is pure Tsemel. Throughout the film, she calls out double standards, tracking a trend of lighter sentences for Jews accused of the same crimes as Palestinians, in the hopes that precedent might prevail.

The 2016 case that forms the center of the film is the trial of a 13-year-old boy accused of attempted murder of Jews with a knife in the Pisgat Ze’ev neighborhood of Jerusalem. The teen, Ahmad, whose face is obscured under a rotoscope-style wash, peppered with moving newsprint, is her youngest ever client and his case presents a unique problem.

If Tsemel enters a plea of attempted murder on his behalf, he might get off with a lighter sentence in juvenile detention. But, if she goes to trial, his conviction might arrive after he turns 14, at which age he can go to prison.

“Even if we stand to gain something by pleading guilty to attempted murder, if he won’t do it, I can’t do it for him,” Tsemel tells a reporter, her arms flung wide in practiced exasperation. “And the court won’t accept a false admission.”

The reporter — one of many we see Tsemel feeding with juicy quotes — wonders if pushing forward with a trial might lead to “a heavy price.”

To this, Tsemel unfurls her arms, cloaked in black lawyerly robes, and says “It’s always heavy.”

Jones and Bellaiche’s film is as unflinching as Tsemel herself in showing how her career has affected her family. Her husband and children admit that they often came second to her crusade.

Her son, Nissan, recalls a childhood memory of being on a stroll with his mother when she was threatened by a man with a gun who recognized her. After this frightening incident — which failed to ruffle Tsemel — Nissan asked her why she chose this life. “I can’t do anything else. I believe in it,” she told him.

The film’s singular focus on Tsemel and her cases doesn’t leave much space for the voices of her legal peers defending Palestinians acting against the occupation. One might walk away under the impression that Tsemel is the only Israeli defender who elects to pursue these cases. (Most of the colleagues we see her work with are Arabs — one of whom is the subject of a shocking coda.)

But there is an interview late in the film with human rights lawyer Avigdor Feldman, with whom she won a rare case: A Supreme Court ruling against physical torture — a verdict that, according to Feldman, security forces have largely overlooked. Feldman makes a clear distinction between himself and Tsemel.

“I don’t believe in justice,” Feldman says, going on to say that he also doesn’t believe in fair trials for Palestinians in the current system.

In ‘Advocate,’ A Controversial Israeli Lawyer Makes Her Case Against The Occupation