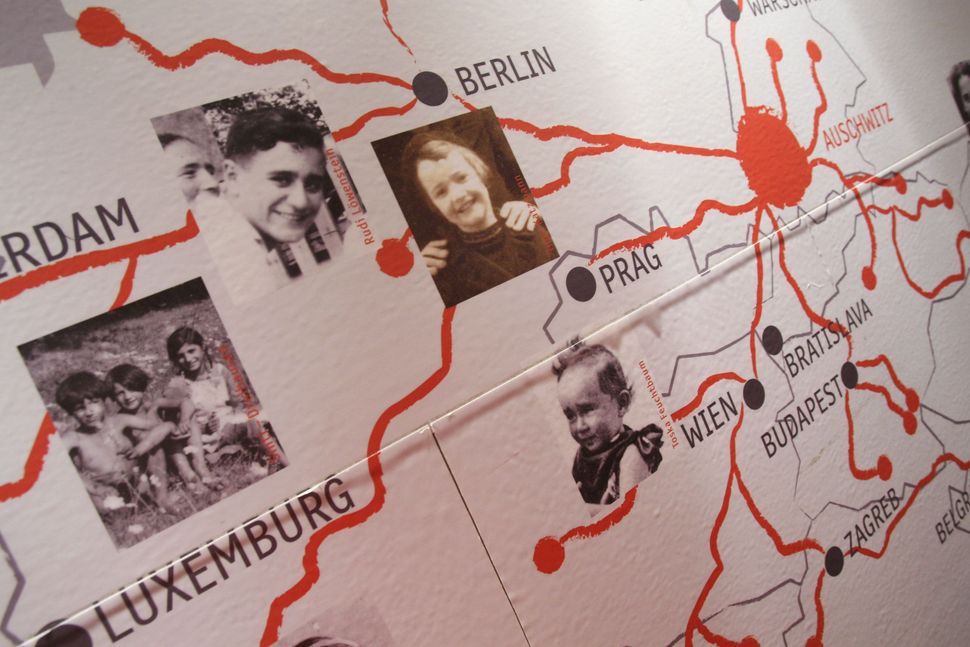 A map of train routes leading to Auschwitz included in the traveling Holocaust exhibition “Train of Commemoration,” 2008. Image by Sean Gallup/Getty Images

The letter was in response to the series “The Devil Next Door,” which tells the story of Ivan Demjanjuk, a Ukrainian guard at the Treblinka death camp. One episode of the series includes a map detailing where the Nazi camps were located in modern Poland, which — according to the prime minister — did not reflect the true origins of these places, which were created and run by the Germans during the war.

The prime minister noted that “six million of our citizens — Polish, Jewish and many other ethnicities — fell victim to the German Nazi regime of terror.” In fact, there were about 4.8 million “Polish victims,” including 3 million Jews. Historian Marcin Zaremba in his book “Great Fear” (“Wielka Trwoga”) discussed how the communist Polish authorities falsified the number of Polish victims in order to “elevate it to the Jewish level.”

Morawiecki also wrote that “Poland was the only Nazi-occupied country, where one faced the death penalty for hiding Jews,” which also is not in line with historians’ findings. The death penalty for helping Jews also was introduced in other countries of occupied Eastern Europe, including the German-occupied territory of Belarus, Ukraine, the Baltic States and parts of the USSR.

The prime minister emphasizes in the letter that the map used in the Netflix series is “not only incorrect, but it deceives viewers into believing that Poland was responsible for establishing and maintaining these camps, and for committing the crimes therein.”

Morawiecki expressed the hope that Netflix will fix the error “as soon as possible.”

The map used in the series comes from British press materials from 1985.

In 2018, Poland introduced an amendment to the Act on the Institute of National Remembrance, according to which made it a crime to accuse Poland of complicity in the Holocaust punishable by up to three years in prison.