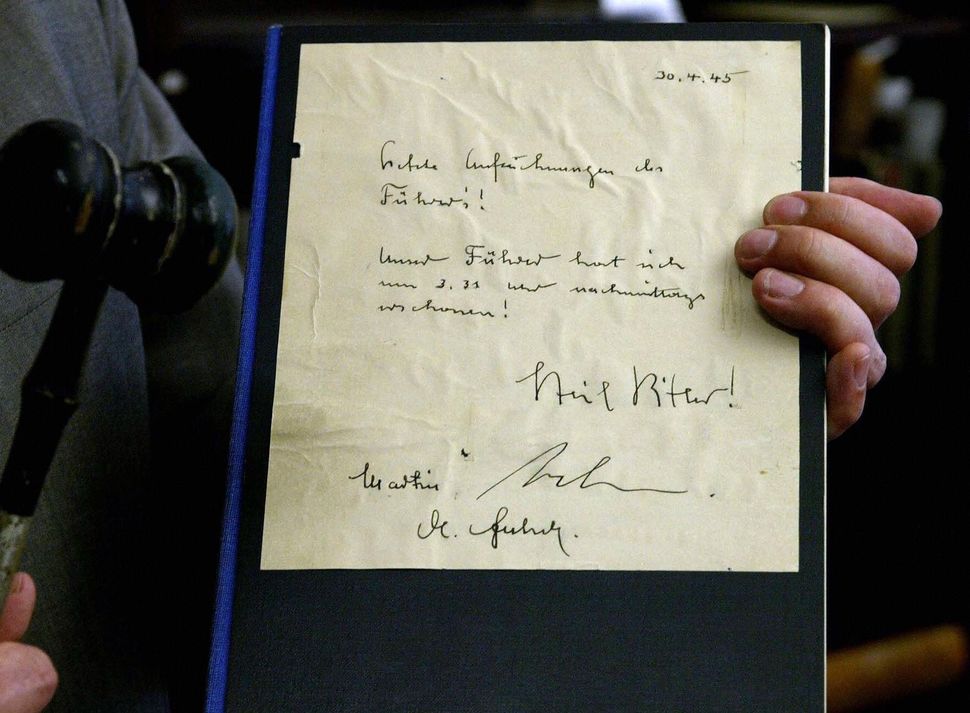 A copy of the last circulating copy of the fake Hitler diaries by late forger Konrad Kujau. An anonymous bidder acquired the diary for 6,500 euros. Image by Getty/MICHAEL URBAN/Staff

It would be the first of many.

The books were diaries chronicling the Fuhrer’s life, often in banal detail. The New Yorker reported in 2013 that they included reflections on his bad breath and girlfriend Eva Braun’s false pregnancy. But, they also revealed the Nazi leader to be rather annoyed by his Propaganda Minister, Joseph Goebbels, and shockingly unaware of the fate of German Jewry.

The volumes were said to have been hidden away for decades — first in a Dresden-area barn, and later in the collection of an East German officer — after being collected from a 1945 plane crash. But, the story went, they were finally ready to enter the public consciousness courtesy of an intrepid German newspaperman.

One expert, the British Hitler scholar Hugh Trevor-Roper, called the diaries “an archive of great historical importance” in 1983, right before selections from them were set to publish in the international press. Indeed, the diaries promised to change the world’s understanding of history.

The only problem was, all 61 of them were fake.

The plane crash? That was real. But everything else, from the barn and the officer down to the details of “Hitler’s” handwriting, was a ruse. And not even a very elaborate one. Even the monogrammed covers, if one looked carefully, were slapdash: What at first appeared to be the Gothic script “A” for “Adolf” was actually an “F.” The eye-catching leather was imitation.

The Hitler Diary hoax, uncovered nearly simultaneously with the international publication of the purported diaries’ excerpts, recently came back into the news, as one of the scandal’s casualties, onetime Sunday Times of London editor Frank Giles, died October 30 at the age of 100. Giles, who lost his job in the fallout of the hoax’s discovery, was, of course, not alone; he was one of four editors in three countries to be sacked.

The diaries, said to cover Hitler’s life from 1932, the year before his rise to power, through to 1945, the year of his death, were produced by a German forger, Konrad Kujau. Kujau progressed to the diaries after first began dabbling in Hitler fakes with forged paintings, for which he also falsified the attributions, The Independent reported in 2018. He began making the diaries in 1978, using tea-aged paper, and selling to collectors. By the early 1980s, he had met Gerd Heidemann, a reporter for the German paper Stern and an avid collector of Nazi memorabilia — including Hermann Göring’s yacht, through the purchase of which he was said to have begun a romantic relationship with Göring’s daughter.

Heidemann began stealthily collecting the diaries for Stern with the blessing, and money, of the paper’s publisher and the collaboration of an editor. As The New Yorker reported in 2013, Heidemann would wait on an East German highway, toss money for the diaries into a passing car, receive the books through the open window of his Mercedes and bring them back west.

In May 1981, Heidemann alerted top editors to the acquisitions, Felix Schmidt, one of three editors-in-chief at the time, recalled in a 2013 remembrance. The paper had sunk one million Deutsche marks into the project already, and would go on to spend 9.3 million more to acquire the full 61-volume set. Heidemann informed the editors of the plane crash provenance of the letters and, because the plane crash actually occurred, they found the story credible.

“The ‘Hitler Diary Euphoria’ had taken hold of all of us,” Schmidt wrote, explaining why concerns over Heidemann’s “mental health” were not raised at the time.

Stern consulted two historians to authenticate the volumes while Heidemann continued acquiring them. The experts concluded that the diaries were legitimate, and it’s no wonder why: They were consulting the same text, Max Domarus’s “Hitler: Speeches and Proclamations 1932-1945 — The Chronicle of a Dictatorship,” from which Kujau had lifted liberally in his forgeries. When Kujua wasn’t pulling from Domarus, the Independent noted, he would often fabricate ignorance of the Holocaust on behalf of the Führer or, write something more pedestrian, like “Have to go to the post office, to send a few telegrams.”

Handwriting experts were likewise convinced of the diaries’ veracity. But the supposedly independent handwriting samples to which they compared the diaries came from Heidemann; like the diaries, they were also produced by Kujau.

By 1983, Stern was busy making syndication deals for the diaries with Newsweek, Time, and two properties belonging to Rupert Murdoch, the Times of London and the Sunday Times. With the diary collection almost complete, Heidemann promised even more from his source — namely an opera by Hitler and a third installment of “Mein Kampf.”

Schmidt recalled pressing Heidemann to reveal his source on April 22, three days before Stern announced their payload. But Heidemann refused, claiming, according to a translation in The New Yorker, that “lives hang in the balance.”

While the German drama was elapsing, The Sunday Times, which had written a $200,000 check for rights to publish the diaries in the British Commonwealth, performed its own independent check of the documents’s authenticity. The paper called on Trevor-Roper — also known as Lord Dacre — to verify them.

Trevor-Roper, like the other historians, found them to be credible after examining them in a Swiss vault. A quote from him teasing the diaries was included in The Sunday Times’ sister paper, The Times, on Saturday, April 23.

That same day, as the Sunday Times press was printing over one million copies running the headline “Hitler’s Secret Diaries” in two-inch tall letters, set to arrive on newsstands and doorsteps the following morning, Giles and his colleagues were sharing celebratory libations when he gave Trevor-Roper a ring to see if he could provide a second analysis in the following Sunday’s paper.

Giles’s side of the call was recorded in Robert Harris’s 1986 book “Selling Hitler.”

After Trevor-Roper admitted to some last minute doubts, Giles asked, “But these doubts aren’t strong enough to make you do a complete 180-degree turn on that?” After a pause, the other editors in the room recalled Giles saying, “ Oh. I see. You are doing a 180-degree turn…”

Informed that their expert now believed the diaries to be fake — it’s unclear what prompted the sudden change of heart — the Sunday Times, hours away from their papers being delivered, called owner Rupert Murdoch to see if they should stop the print run-in-progress, to which Murdoch said, “Fuck Dacre. Publish.”

Publish they did, and the paper, buoyed by the previous day’s publicity in The Times, sold splendidly on April 24, with a story presenting the diaries as the real deal. It appears the English paper didn’t tell Stern about the issues their expert brought to them. In fact, they asked Trevor-Roper to stay quiet about his objections, hoping they could run them as an exclusive in the next Sunday’s paper.

But Stern held a press conference in Hamburg the day after the Sunday Times release to announce their paper’s own Hitler diary issue. Trevor-Roper, who was at the press conference, let Stern know his concerns — only this time, the public was there to hear them.

“I regret that the normal method of historical verification has been sacrificed to the perhaps necessary requirements of a journalistic scoop,” Trevor-Roper said at the press conference, according to The Independent.

Trevor-Roper was not alone in his objections. Famed Holocaust denier David Irving, also present at Stern’s announcement, questioned how Hitler, who had injured his writing arm in a July 1944 bomb plot, could have written entries dated to the days after the attempt on his life. Irving was carted out of the room yelling “Ink! Ink!” demanding that the ink of the paper be examined for authenticity.

It subsequently was and, by May 6, was found to be modern ink. Schmidt and another editor at Stern resigned almost immediately. Nearly a quarter of a million copies of Stern, some taken straight off the news trucks that were set to deliver them, were pulped.

Heidemann and Kujau both served jail time for the hoax. Kujau insisted Heidemann was in on the score — the reporter was found to have pocketed at least 4.4 million Deutsche marks of the diary acquisition money — but Heidemann denied it to his death.

“I was the big scapegoat for them,” Heidemann said of his colleagues at Stern, according to The Independent.

At the Sunday Times, Giles was the fall guy, made to step down and take on the nominal job of editor emeritus to finish out his contract, The New York Times reported in his obituary.

At the time, Murdoch, hinting at a now all-too-familiar media philosophy, offered a defiant explanation of his decision to run the fake Hitler diaries.

“After all,” Murdoch offered, “we are in the entertainment business.”