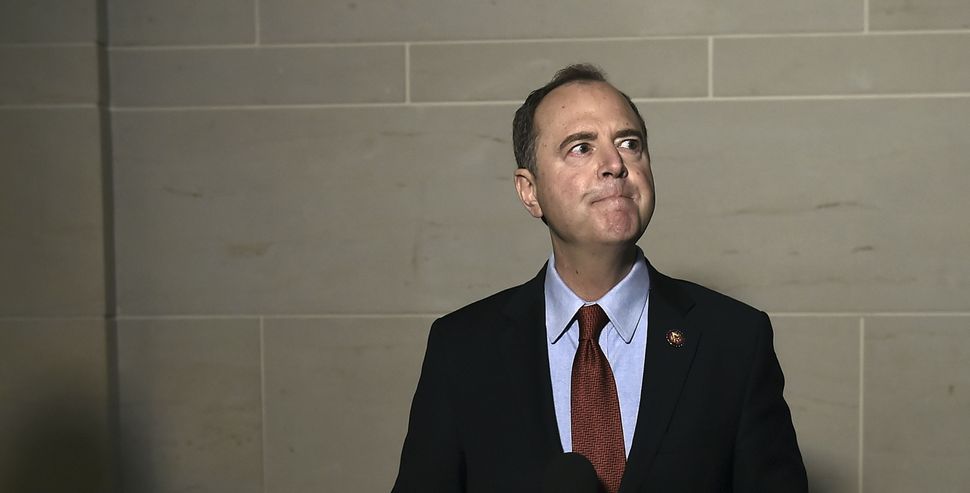 On Wednesday, House Intelligence Chair Adam Schiff conducted the first public impeachment hearing on President Donald Trump with poise, conviction and — certainly — strength. Schiff duly addressed Republicans’ procedural challenges, and refused to be ruffled by, among other canards, his counterpart, ranking member Devin Nunes’s new claim that Democrats were trying to obtain nude photos of the president from Ukrainian sources.

The following day, the president, at a campaign rally in Bossier City, La., called Schiff an unathletic wuss with a small neck.

“Little Shifty Schiff,” said Trump, trotting out his favored anti-Semitic nickname for the congressman. “He’s got the little 10-inch neck. ‘What size shirts do you need, Adam?’ ‘I wear a size nine.’ Nine…. He will not make the LSU football team, that I can tell you.”

Well, Trump is almost certainly right on that last score. Adam Schiff is 59 years old (a bit old to be in the scrum with undergrads); is a congressman for the state of California (and therefore must maintain his residence there and not move to Louisiana) and, for what it’s worth, is vegan (not disqualifying, but probably would make him something of an anomaly on any collegiate football roster.) He is, however, in peak physical condition as a triathlete. So hinting he is in any way in bad shape due to — of all things — his neck size is curious to say the least.

But the point is that Trump has added another dimension to his attacks on Schiff. Naturally, it’s one of those time-tested anti-Semitic tropes: Jewish men are effeminate and bad at sports.

It’s not really worth giving inches to all the counterpoints to this argument — Sandy Koufax, Max Baer and, in football, Gabe Carini, Nate Ebner and this year’s Super Bowl MVP Julian Edelman — but let’s take a brief look at the long tradition of maligning Jews for their athletic prowess.

It begins in antiquity, as Nathan Abrams notes in this helpful Haaretz primer, when Jews living in the Hellenic-influenced Levant eschewed the Greeks’ love of sport for religious reasons. For the Greeks, and later the Romans, athletics were a way to glorify their pantheon, and observant Jews did not partake, under advice from rabbis, as this was a form of idolatry.

There were, certainly, exceptions for Jews who assimilated to Greco-Roman culture (James A. Michener provides a wince-inducing example in his novel “The Source,” where a promising Jewish athlete undergoes a painful modification to his manhood to compete in games run by the Seleucids.)

But, overall, rabbinical authorities promoted the ideal Jew as one devoted to Torah study, not the development of the upper-body or athletic achievement.

And so, many Jews aspired to be, and were received as pale, meek and bookish. At the same time, we were labeled mendacious, crooked, hook-nosed and greedy. These markers took hold in the public imagination and in popular culture from Shakespeare to Dickens. Jews’ specific athleticism was not the main concern for those writers, of course — Jews were not often competing in organized with gentiles for much of the Diaspora — and so, this next stretch of history focuses, regrettably, on conflating an alleged lack of masculinity with poor athletic performance by implication.

By the age of eugenics and race science, there were some notable rebuttals to this concept. Friedrich Nietzsche challenged the notion that Jews were effeminate.

In “Beyond Good and Evil” (1886) Nietszche classified Jews as a “masculine” race.

“The Jews, however, are beyond all doubt the strongest, toughest, and purest race at present living in Europe, they know how to succeed even under the worst conditions (in fact better than under favourable ones),” Nietszche wrote, in a breathless sentence that continues from there.

He concludes, “It is certain that the Jews, if they desired—or if they were driven to it, as the anti-Semites seem to wish — COULD now have the ascendancy, nay, literally the supremacy, over Europe, that they are NOT working and planning for that end is equally certain.”

Nietszsche was, in 1886, being polemical, assailing the prevailing notion that Jews were weak while — somehow, at the same time — secretly working the levers of European society. In 1903, the notion that Jews had a weak, “effeminate” character was bolstered by Otto Weininger’s book “Sex and Character.”

Weininger, a self-loathing Jew who had, the year before publishing, converted to Christianity, devoted a whole chapter to attributing a feminine cast to Jews. A misogynist to his core (August Strindberg loved the book, need I say more), this characterization is one of the worst things the guy could say about you. He called Judaism “the extreme of cowardice.”

“But some reflection will lead to the surprising result that Judaism is saturated with femininity, with precisely those qualities the essence of which I have shown to be in the strongest opposition to the male nature,” Weininger wrote. “It would not be difficult to make a case for the view that the Jew is more saturated with femininity than the Aryan, to such an extent that the most manly Jew is more feminine than the least manly Aryan.”

It’s no surprise, judging by that last section, that Weininger, who committed suicide at the age of 23, was, like Nietszche’s distorted theory of the Übermensch, often cited by Nazi propagandists.

By the mid-century, Jews in entertainment began having fun with the idea that we are bad at sports. It’s an old self-deprecating saw, at home in both the Catskills and later made as laugh in the schtick-filled films of the Zucker Brothers.

It’s such a common joke that pushback has become a trademark of some.

Adam Sandler seems to insist on being seen doing something athletic in any film he’s in. In the inaugural season of “SNL,” a 5’3 Paul Simon was shown shooting hoops with former Globetrotter Connie Hawkins.

Naturally, with the coming of the State of Israel and its formidable army, the stock character of the toxically masculine Mossad agent is now in fashion. (Still, people laughed at Team Israel’s odds in the 2017 World Baseball Classic — though they did pretty well.)

The upshot is that Trump said nothing new, nothing that hasn’t been refuted and nothing that we haven’t been saying about ourselves for millennia. Schiff would likely agree that he’s not exactly a first-round draft pick, but so what? Trump’s ideas of masculinity and its worth are — no surprise — a harmful throwback. Ironically, his strong man posturing (and his weirdly specific fixation with the dimensions of Schiff’s neck) reveal his very real fear of Schiff’s investigation.

Or, maybe Trump is projecting and, much like Nora Ephron, feels bad about his neck.