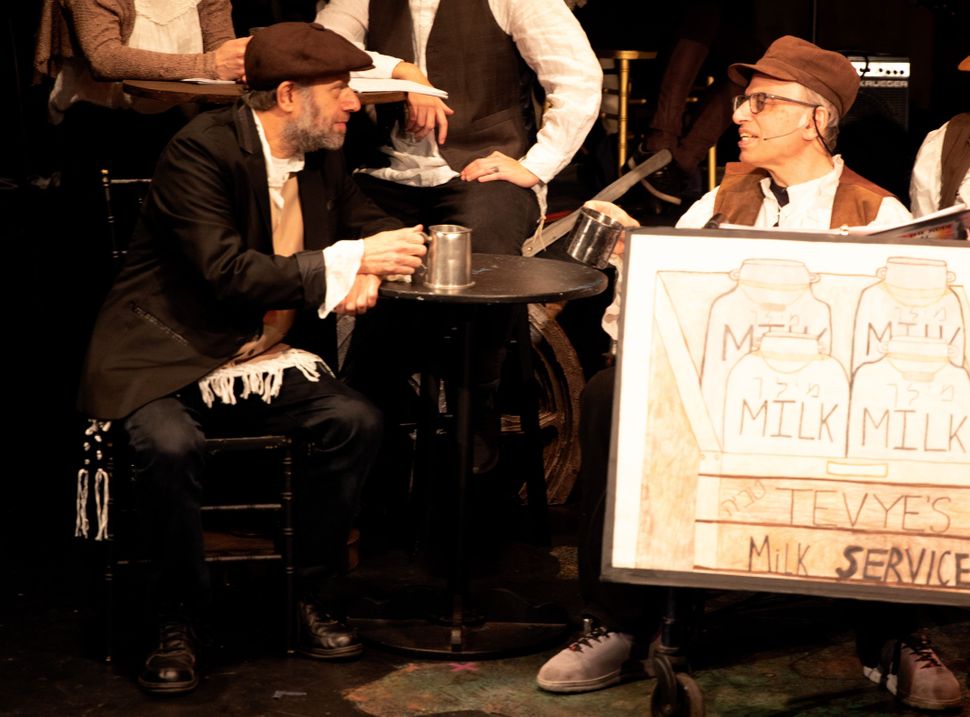 Michael Bournas-Ney and Martin Sturm in “Fiddler on the Roof Sr.” Image by Courtesy of NYU

In a black box theater at New York University, Tevye’s teenage daughters, wearing long skirts, head scarves and modern shoes — the shtetl, but with Doc Martens and duck boots — sang the last notes of “Matchmaker.” The dress rehearsal looked like any other production of “Fiddler on the Roof,” in every way but one: Most of the actresses on stage were older than 65.

“We have a whole shtick with the broom,” explained Jill Newman Iversen as the director gave a note about the rhythmic sweeping with which Chava (Lorraine Congiusta) accompanies the song. Iversen plays Tzeitel, the oldest of the five sisters, in “Fiddler on the Roof Sr.,” an abridged pilot production of the beloved musical in which senior citizens, all residents of the same Manhattan co-op, star alongside students in NYU’s Drama Therapy program. Tevye’s daughters, singing of their mixed feelings at the prospect of marriage, embodied the simultaneous adolescent eagerness and trepidation that makes “Matchmaker” so poignant. The song’s emotional arc shifts when performed by women who have likely witnessed more of the evils Tzeitel lists as reasons to stay unwed — violence, meanness, drunkenness and more — than most teenage actresses. It showcases more bitterness, but also, in its inherent zest-for-life-ishness, more hope. 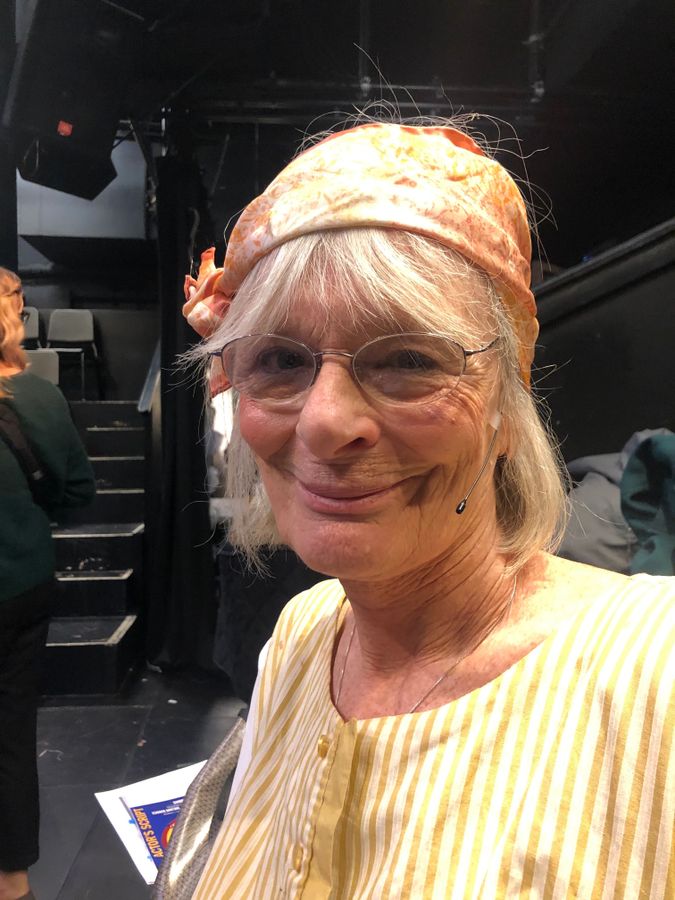 Marion Pierce, 73, who plays Shprintze in “Fiddler on the Roof Sr.” Image by Talya Zax

“I’m supposed to be about 13 years old,” said Marion Pierce, who plays Shprintze, the second-youngest sister. “At 73, it’s kind of hard to play a 13-year-old, because I don’t want to look foolish.” So, she said, she’s “just playing who I am — with a 13-year-old spirit.”

That 13-year-old, born near the turn of the 20th century in the Pale of Settlement, would have grown up in a world that, for many of the cast members, might not sound terribly distant. “My father was born in Dashev, outside Kiev, a shtetl I’m sure was similar to Anatevka,” the actress Joan Ostroff wrote in her biography in the musical’s program. But looking back to that lost world has afforded the actors a chance to better understand their histories and those of their peers. “I get to know the traditions,” said Martin Sturm, 69, one of two actors portraying Tevye. The Jewish communal life depicted in the show presented an opportunity to learn about something “completely different from what I was raised [as],” said Pierce, who grew up a Roman Catholic in Greenwich Village.

The production, the debut effort in a new partnership between NYU, Music Theatre International and the New York senior services agency JASA, runs from November 21 to 24. It was envisioned, said Leonard Boxer, chairman of JASA’s board, as an opportunity to combat social isolation among the aging. For some, it’s done just that; Pierce, who previously didn’t know many of her neighbors, said the cast are now “really good friends.” It’s also presented an opportunity to engage new passions, marking the stage debut of many of its older cast members. “Acting brings out a lot in me,” said Sturm. Before trying it, “I didn’t say too much.” Susan Kornhauser, who plays Golde, auditioned for the show only because the ceramics studio where she ordinarily spends free time is closed for renovations. “I’m a retired lawyer,” she said. “I was an administrative law judge, and I was a traffic court judge for the last 20 years.” She had never acted on the stage, she said, but acting itself isn’t new; in those professions, “you sort of have to.” 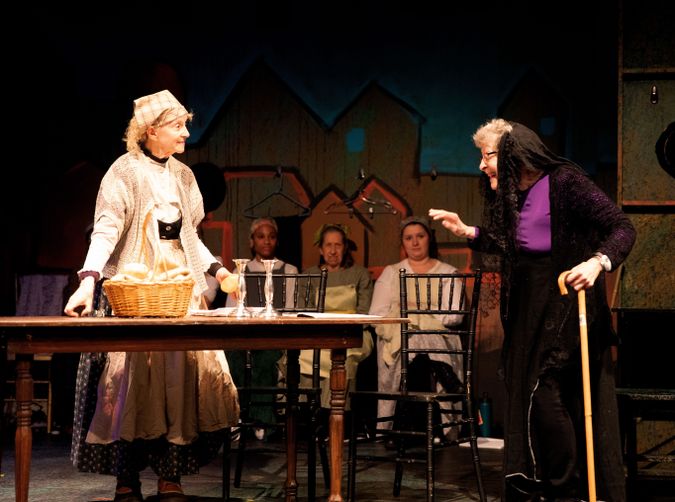 Susan Kornhauser and Hilda Aronson in “Fiddler on the Roof Sr.” Image by Courtesy of NYU

“It brought something out in me I think was always there,” said Pierce. “I would have loved to have been a dancer, I would love to have been a singer, but it just never happened. At this age, all of a sudden, I’m given a chance to pursue it.”

“Fiddler” is beloved for its warm heart, unforgettable characters and deeply affecting music. But it’s also a work of determined, if quiet, political progressivism, an unsparing examination of the challenges faced by the marginalized. Jewish communities in early 20th century Imperial Russia were systematically persecuted, a primary focus — and central plot motivator — of “Fiddler.” But the musical also shows that those communities were far from free of internal prejudice, including against the elderly. Hilda Aronson, 87, plays the indelibly meddlesome matchmaker Yente, whose name has since the 1930s been a byword for “nuisance.” Aronson, who sports a corona of white curls, was careful to differentiate between herself and her role: “I hate when people call me Yente,” she said, “because I’m the opposite of a Yente. I respect people. I don’t go into their secrets.” But Aronson has also found admiration for her character. “Yente is a woman who has to find her place in the community,” she said. “Given the type of community, she could be useless, because she’s a poor widow. I respect her because she found a way of being self-sufficient.”

At the end of “Fiddler on the Roof,” their town destroyed and friends dispersed, Tevye and much of his family set off for the U.S., unsure what the new world has in store for them. Aronson has an answer. She was born in Argentina, but, she said, “I have lived here 60 years.”

Immigrating was, for her, an opportunity. She became a teacher, had children and grandchildren. She adopted other families as her own, and really meant it, adding the young children of close friends to her will. Everywhere she went, up to and including the black box stage at NYU, she built a community. Decades after immigrating, she said, “I don’t think of myself as Argentinean.”

“I think of myself as American.”

Correction, November 22, 5:20 pm: A previous version of this article did not note that “Fiddler on the Roof Sr.” is a pilot production that is not yet fully licensed.