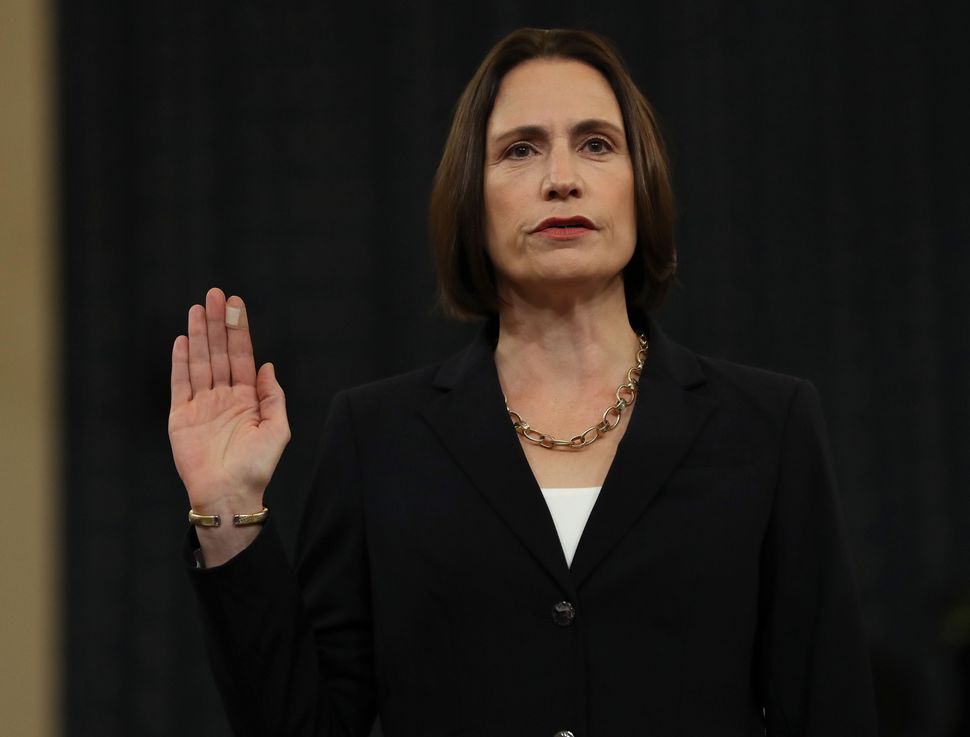 Fiona Hill, the former top Russia expert on the National Security Council, dropped a bombshell during her testimony in today’s impeachment hearings by likening the George Soros conspiracy theories “the new Elders of the Protocols of Zion.”

Well, what are those Protocols?

“A classic of anti-Semitic literature,” according to Encyclopedia Brittanica.

The “classic” goes by several names, including the “The Jewish Peril” or “The Protocols of the Learned Elders of Zion.”

The U.S. Holocaust Museum is a bit blunter. “The most widely distributed antisemitic publication of modern times.”

Translation — that also means the most translated. And if you need a genre for the Protocols, Google comes back with a quick answer. The genre is Propaganda.

The Protocols describe a secret meeting of Jewish leaders to control the world; the U.S. Holocaust Museum titled its Protocols exhibit “A Dangerous Lie.” The origins of the “Protocols” are not entirely clear, and evolved from an 1864 book by a French political satirist that never explicitly mentioned Jews titled “The Dialogue in Hell Between Machiavelli and Montesquieu.” Then came an 1868 novel titled “Biarritz” that imagined leaders of 12 Jewish tribes meeting in a Prague Jewish cemetery.

The U.S. Holocaust Museum provides a timeline outlining the multinational, multilingual history of the Protocols — and explains the role of the Russian secret police.

“Although the origin of the ‘Protocols’ is still a matter of debate, it was most likely fabricated under the direction of Pyotr Rachovsky, chief of the foreign branch of the Russian secret police (Okhrana) in Paris” in 1897-99, the Holocaust Museum explains on its website.

So what exactly do the Protocols say in 24 chapters, or “protocols?”

“The document purported to be a report of a series of 24 (in other versions, 27) meetings held at Basel, Switzerland, in 1897, at the time of the first Zionist congress. There Jews and Freemasons were said to have made plans to disrupt Christian civilization and erect a world state under their joint rule. Liberalism and socialism were to be the means of subverting Christendom; if subversion failed, all the capitals of Europe were to be sabotaged,” the Encyclopedia Brittanica states.

While Haaretz has noted that the Protocols are a bit short on details on how, exactly, to dominate the world—their exact words were “sadly lacking in practical detail” –that has not stopped their persistent and dangerous popularity—made possible by translation and re-translation.

They were printed in Russia in 1903; Germany in 1920; and infamously published by Henry Ford in his newspaper The Dearborn Independent as “The International Jew.” That English language version was then translated into a dozen languages. And in some languages, there are multiple translations.

“There are at least nine different Arabic translations of the Protocols and innumerable editions, more than in any other language including German,” Professor Bernard Lewis writes in his book “Semites and Antisemites.” “One of them, published in 1961, was introduced by the famous and respected author Abbas Mahmud al-Aqqad; another, published in about 1968, was translated by Shawqi Abd al-Nasir, the brother of the Egyptian president.”

Then there is the matter of political leaders referencing the “Protocols.” “The book has been publicly recommended by Presidents Nasser and Sadat in Egypt, President Arif of Iraq, King Faisal of Saudi Arabia, Colonel Qaddafi of Libya, and various other monarchs, presidents, prime ministers, and other political and intellectual leaders,” Lewis writes.

The Protocols have also been translated into Hebrew; Adi Amsterdam, a faculty member at the David Yellen College of Education who I met in Jerusalem, has uploaded a Hebrew translation with commentary to Academia. edu; it is downloadable as PDF Amsterdam believes that it is important for Hebrew readers to be able to access it, and see what it is, exactly. Here is the link:

So what’s the connection between Soros and the Protocols?

For one, it’s a lie. Propaganda, as Google puts it. But the wide range of people referencing Soros control—it has appeared everywhere from national television to dinner parties where the idea of Soros placing ads on Craigslist to pay protesters has become something I have heard half-a-dozen times this year — is the other factor.

The power of a lie, after all, often rests with how widely it is spread.